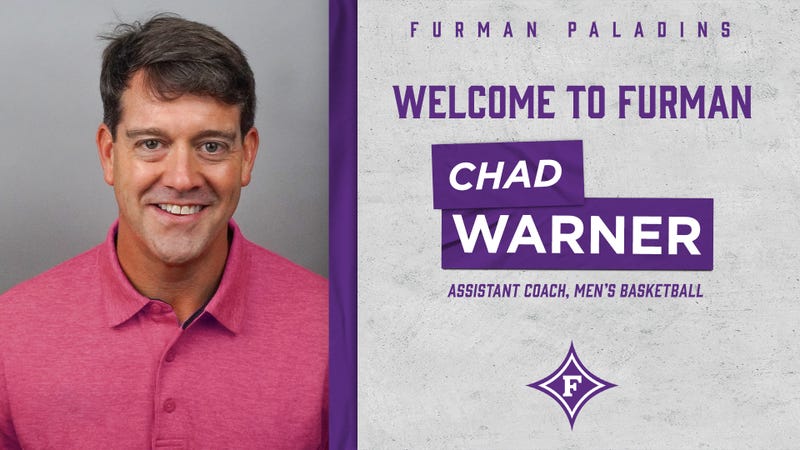 Chad Warner is joining the Furman men’s basketball program as an assistant coach, Paladin head coach Bob Richey announced today. Warner comes to Greenville after spending the past five seasons as head coach at Flagler College, leading the Saints to a 72-63 record highlighted by an 18-3 mark in 2020-21 and 23-8 in 2021-22. He was also the head coach for eight seasons at Shorter University posting a 156-91 record. In 13 seasons as a head coach, Warner has amassed a 228-154 overall record.

“We are really excited to add Chad to our staff,” said Richey. “His values, experience, and history of building winning cultures and programs will be a great addition to Furman University. Chad has led two programs to the Final Four of their respective associations (Shorter-NAIA/Flagler-Division II). I’ve known Chad almost my entire coaching career and the alignment of our purpose, program philosophy, and even the style of play, makes this a home run hire for us. I’m very thankful to add Chad, Karin, Aly, Caroline, and Jack to our Furman family.”

This past season, the Saints posted a 23-8 overall record and advanced to the NCAA Division II Southeast Regional, posting more Peach Belt Conference victories (14) than they ever had since joining the league over a decade ago. Flagler also achieved its highest national ranking, No. 2, in the NCAA Division II Preseason Top 25 Poll. Warner coached Jaizec Lottie to his second consecutive Peach Belt Player of the Year award and NABC Division II All-America honor.

The Saints went 11-1 in Peach Belt Conference play in 2020-21, culminating in the program’s first PBC regular season and tournament championships. The season began with Flagler securing its first two wins over NCAA Division I opponents in program history, defeating Central Michigan and North Florida. Warner, who was named PBC Coach of the Year, then guided the Saints to their first-ever NCAA Division II Elite Eight appearance after beating perennial power Alabama Huntsville in the South Region title game. Flagler would then score a 70-69 win over seventh-ranked Truman State to become just the third team in the school’s NCAA Division II era to advance to the national semifinals.

“I am so excited to be joining Furman Basketball,” said Warner. “I have known Coach Richey for almost 16 years and have always admired him as a friend and coach. The respect I have for Furman University, Coach Richey, his staff, and team has my family ready to put down roots in Greenville and get to work. We already feel welcome and can’t wait to learn the Furman way.”

Prior to joining Flagler, Warner spent the 2016-17 season as a special assistant to the head coach and recruiting coordinator at Valparaiso. The Crusaders claimed a share of the Horizon League regular season championship after winning 24 games. Valparaiso earned a postseason berth for the seventh straight season, earning an at-large spot in the NIT. One of his players, Alec Peters, was a second-round selection in the 2017 NBA Draft by the Phoenix Suns.

Warner was the winningest coach in program history at Shorter with 156 victories, including a school-record 34 wins in 2011-12. Shorter advanced to the NAIA Division I “Fab Four” that year and was ranked No. 1 nationally for most of the season. He was named the NABC NAIA Division I National Coach of the Year.

He led Shorter through its transition from NAIA to NCAA Division II in 2012-13. The Hawks recorded 21 victories and won the National Christian College Athletic Association (NCCAA) Division I national championship. Warner was voted the Georgia Basketball Coaches Association (GABCA) Division II Coach of the Year in 2013.

He began his collegiate coaching career at his alma mater, Georgia, serving as a graduate assistant under head coach Jim Harrick. Warner graduated from Georgia in 1998 with his bachelor’s degree in journalism. He earned a walk-on spot as a freshman under head coach Hugh Durham. After graduating from Georgia, he was an associate head coach at the Darlington School for four seasons.