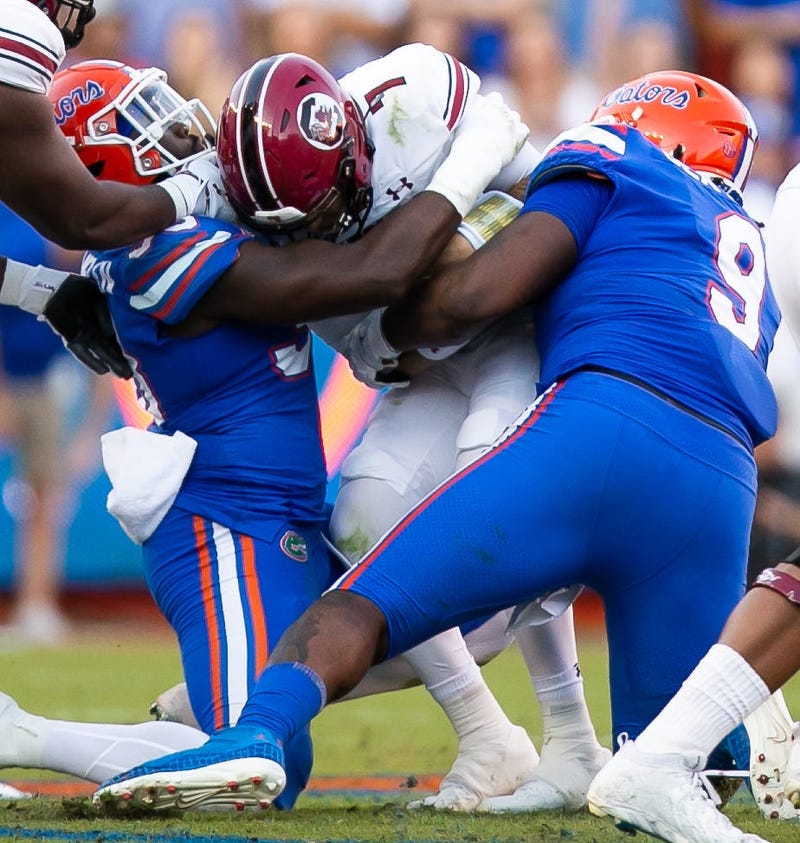 If this was Anthony Richardson’s final game in The Swamp, he led a performance to remember. Richardson accounted for 3 TD's, Montrell Johnson Jr. ran for a career-high 161 yards and a score, Florida steamrolled South Carolina 38-6 on Saturday.

Hwoever, Richardson’s future remains a trendy topic. The third-year sophomore has played his best over the past month and could turn pro or give Florida a huge jump-start heading into 2023.

The Gators dominated the Gamecocks from the start, scoring on their first four drives and leading 24-0 before South Carolina (6-4, 3-4) crossed midfield. Richardson opened the drubbing with a 3-yard run and doubled the lead with a 15-yard strike to Ricky Pearsall. Freshman Trevor Etienne had the play of the game, an 85 yard TD run late in the first quarter to make it 21-0.

Florida’s defense played its best game of the season, with the highlight coming when 415-pound defensive tackle Desmond Watson ripped the ball out of Jaheim Bell’s arms and rambled 8 yards the other way.

Players chided him for getting tackled by South Carolina quarterback Spencer Rattler.

“How you get tackled by the quarterback?” linebacker Ventrell Miller quipped.

Added Rattler: “I tackled him, come on. That’s probably the biggest dude in college.”

Watson was so tired that he barely celebrated when he reached teammates eagerly awaiting his arrival on the sideline. Still, it took an hours-long party to another level for the Gators, who finished with a season-high 374 yards rushing.

Richardson completed 11 of 23 passes for 112 yards and two touchdowns. He also ran for 96 yards and a score. Etienne finished with 100 yards on the ground.

At one point, Florida had three guys with at least 100 yards rushing — a feat last accomplished by the Gators in 1984. But Richardson lost 6 yards on a sack in the fourth before heading to the bench.
Little went right for South Carolina, which played without running back MarShawn Lloyd (thigh bruise).

South Carolina again struggled to run the ball on offense. That has been a familiar theme this year, especially against SEC opponents. They were held to well under 100 yards rushing, while Florida just racked up yards in the ground game.

South Carolina is bowl eligible already, sitting with 6 wins. They won 6 in the regular season last year in year #1 under Shane Beamer. Many expected them to take a step forward and win more than last year. They have that chance, but another 6-6 finish could well happen. South Carolina has Tennessee this week , they then finish at Clemson on Nov. 26th.