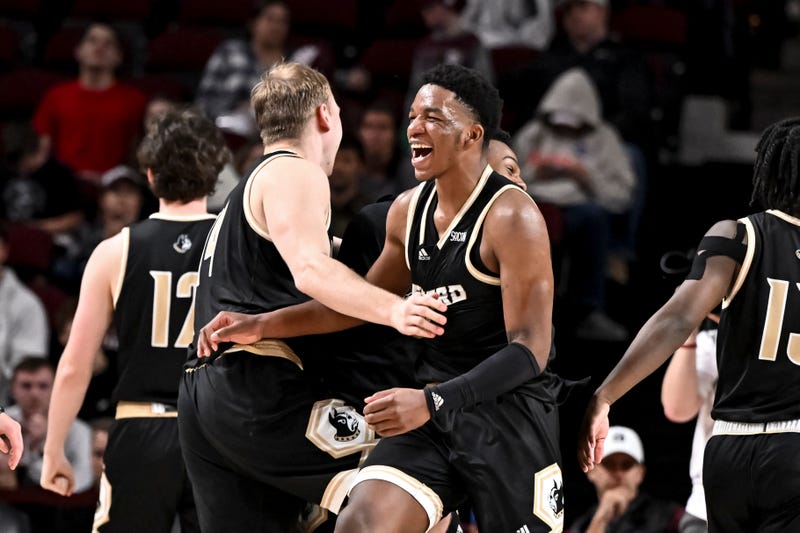 Down four points with four minutes to go, the Wofford College men’s basketball team used an 8-0 run to take the lead and made clutch free throws in the final minute for a 67-62 win at Texas A&M on Tuesday afternoon at Reed Arena.

The Aggies built a 42-32 advantage early in the second half, but the Terriers answered with a 14-2 run to take a 46-44 lead. After trading the lead five more times, Wofford trailed 57-53 with 4:09 left in the game. The Terriers had five points by B.J. Mack and then a three pointer by Jackson Paveletzke for a 61-57 lead with two minutes left. Jackson Paveletzke was 6-of-6 from the free throw line in the final 19 seconds to secure the victory.

The Terriers’ record moves to 8-5 to start the season, while the Aggies are 6-5 overall. Wofford was held to 39.7% shooting from the floor in the game, but thanks to a 36-31 advantage in rebounds (11-to-7 on the offensive glass) the Terriers took 13 more shots in the game.

Jackson Paveletzke led the Terriers with 22 points while pulling down six assists. B.J. Mack had ten points and four rebounds, while Amarri Tice had a game-high seven rebounds. Carson McCorkle added nine points on 3-of-6 shooting behind the arc and Jackson Sivills had nine points and two steals.  For Texas A&M, Wade Taylor IV had 20 points as he was the only Aggie in double figures.

“This is a big time win for this group of guys,” said Jackson Paveletzke. “I am really proud of these guys for finishing things up today. As a freshman this is really cool to play in these big-time games and it is what you dream of. I just stepped up to the line with confidence. I go up there knowing I am going to make the shots because I have been in those situations before. When the game is on the line like that I want the ball in my hands. We have a great group of guys with me that all play their roles and they came up big down the stretch as well.”

The Aggies scored first and had a 7-2 advantage four minutes into play. Jackson Paveletzke scored the first nine points for the Terriers as the lead was 12-9 at the 12:49 mark of the first half. Texas A&M hit their third three pointer of the game for a 15-9 lead and extended it with a bucket and free throw. A three pointer by Jackson Sivills made it an 18-12 game and with 8:19 left the Aggies lead was 21-16. Chase Martin added a three pointer to cut the score to 23-19 a minute later and a three by Corey Tripp made it a 24-22 game with six minutes to go in the half. B.J. Mack got on the board with 2:30 left for a 26-24 margin. The Aggies blocked the next two shots by Wofford and answered on the other end each time to push the lead back to 30-24. A lay-up by Jackson Paveletzke made it a 30-26 margin at the break.

To begin the second half, the Aggies scored the first five points before B.J. Mack hit a three pointer two minutes into play. The Texas A&M lead was 42-32 at the 16:14 mark when Wofford called a timeout. Messiah Jones and Jackson Paveletzke scored to cut the lead to 42-36 a minute later. After back-to-back three pointers by Carson McCorkle the lead was down to 44-42 with 13:19 on the clock. A lay-up by Jackson Sivills tied the game at 44 as the Terriers used a 12-2 run to erase the deficit. A bucket by Adam Silas gave Wofford a 46-44 lead, but a quick three and a lay-up regained the lead at 49-46 for Texas A&M. A 5-0 run by the Terriers with a long three by Carson McCorkle gave Wofford a 51-49 advantage at the midpoint of the second half.

With the score tied at 53 with seven minutes remaining in the game, the Aggies scored the next four points. B.J. Mack hit a lay-up and went to the line for the free throw to make it 57-56. Those three points were the start of an 8-0 run that included another lay-up by B.J. Mack and a three by Jackson Paveletzke to take a 61-57 lead with two minutes remaining.

The Aggies went 2-of-4 from the free throw line over the next ninety seconds to make it a 61-59 game. Jackson Paveletzke was fouled twice and went 4-for-4 to give Wofford a 65-59 lead, but the Aggies hit a three with seven seconds left for a 65-62 margin. The Aggies fouled Paveletzke again and he hit both for the 67-62 final score.

Tuesday's victory marks the 6th win for the Wofford program over a Power 5 Opponent since 2017.