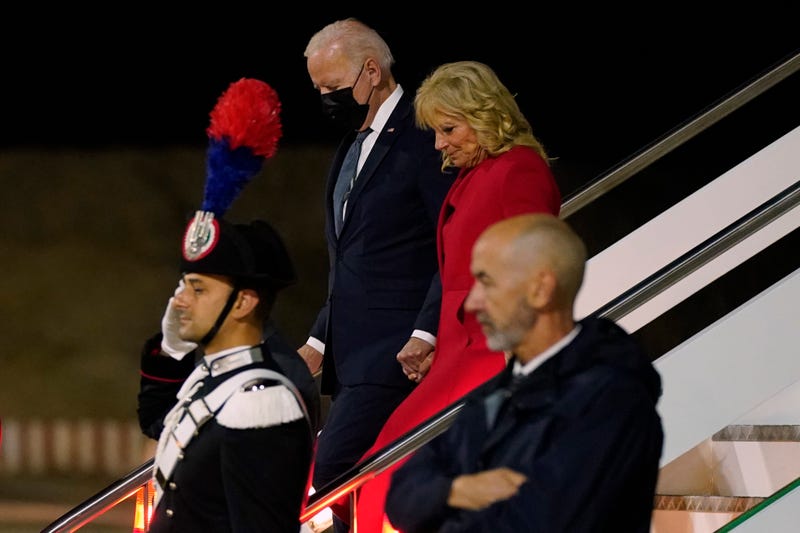 ROME (AP) — President Joe Biden promised to show the world that democracies can work to meet the challenges of the 21st century. As he prepares to push that message at a pair of global summits, his case could hinge on what's happening in Washington, where he was struggling to finalize a major domestic legislative package.

After a fitful day of talks over the fate of twin infrastructure and social spending bills that he cast as a choice between “leading the world, or letting the world pass us by," Biden landed in Rome aboard Air Force One in the dark early Friday with the answer still undetermined.

Headed first to a Group of 20 summit in Rome and then to Glasgow, Scotland, for a U.N. climate summit, Biden will be pressed to deliver concrete ideas for stopping a global pandemic, boosting economic growth and halting the acceleration of climate change. Those stakes might seem a bit high for a pair of two-day gatherings attended by the global elite and their entourages. But it's written right into the slogan for the meeting in Rome: “People, Planet, Prosperity.”

It was a reflection of his promise to align U.S. diplomacy with the interests of the middle class. This has tied any success abroad to his efforts to get Congress to advance his environmental, tax, infrastructure and social policies. It could be harder to get the world to commit to his stated goals if Americans refuse to fully embrace them, one of the risks of Biden’s choice to knit together his domestic and foreign policies.

Before leaving Washington, Biden pitched House Democrats to get behind a scaled-back $1.75 trillion “framework” that he believes could pass the 50-50 Senate. It remained to be seen whether lawmakers would embrace the package or send Biden back to the negotiating table, as some key priorities like paid family leave and steps to lower prescription drug costs were excised from the bill, which will be paid for with hiked taxes on the nation's wealthiest and corporations.

“The rest of the world wonders whether we can function," Biden told the lawmakers, according to a source familiar with his remarks.

House Speaker Nancy Pelosi invoked the trip as she tried to rally Democratic votes around the separate $1 trillion infrastructure package, attempting, unsuccessfully, to build support for a vote on Thursday before Biden arrived in Rome.

“When the president gets off that plane we want him to have a vote of confidence from this Congress," she said. “In order for us to have success, we must succeed today.”

While Biden was in the air, Pelosi, facing opposition from progressives who also want assurances that the scaled-back social spending plan will pass, pulled the plug on a Thursday vote and instead set out to pass yet another stop-gap funding measure for a range of transportation initiatives.

Biden’s trip abroad comes as he faces an increasingly pessimistic nation at home, and souring views of his handling of the nation’s economy. According to a new poll from The Associated Press-NORC Center for Public Affairs Research, just 41% of Americans now approve of Biden’s economic stewardship, down from 49% in August and a sharp reversal since March, when 60% approved.

Americans are split on Biden overall, with 48% approving and 51% disapproving of his handling of his job as president. Only about a third of Americans say the country is headed in the right direction, also a significant decline since earlier this year when about half said so.

One consequence of Biden's decision to so closely link up his domestic and foreign policies is that both are now at the mercy of West Virginia Sen. Joe Manchin and Arizona Sen. Kyrsten Sinema, whose votes are essential in a Senate evenly split between Democrats and Republicans. Biden aides have hoped for, among other things, a more than $500 billion investment to combat climate change in the United States, which would help efforts to persuade China and other nations to make investments of their own in renewable energy.

“It’d be very, very positive to get it done before the trip,” Biden said Monday.

But as talks slogged on, administration officials began to play down the significance of Biden's spending plan still hovering in limbo. White House press secretary Jen Psaki stressed that the president can still work the phones from Rome, the city that gave birth to the word “Senate.” She suggested that foreign leaders can see beyond ongoing backroom talks with U.S. lawmakers in order to judge Biden’s commitment.

“They don’t look at it through the prism of whether there is a vote in one body of the legislative body before he gets on an airplane,” Psaki said.

National security adviser Jake Sullivan, though, has framed the bills as vital to the nation's security. “Making these investments in American strength will be very important to our national security going forward,” he said.

Reaching for a deal that has had a perilous journey thus far, the president is beginning his trip abroad with an expert in the power of prayer. Biden, the nation’s second Catholic president, will meet Friday with Pope Francis at the Vatican in a visit that is part personal for the intensely religious commander in chief and part policy, particularly around matters of climate and confronting autocracies.

Biden will also pay a visit to the Italian hosts of the G-20 summit before he sits down with French President Emmanuel Macron. Biden is trying to close a rift with France created when the U.S. and