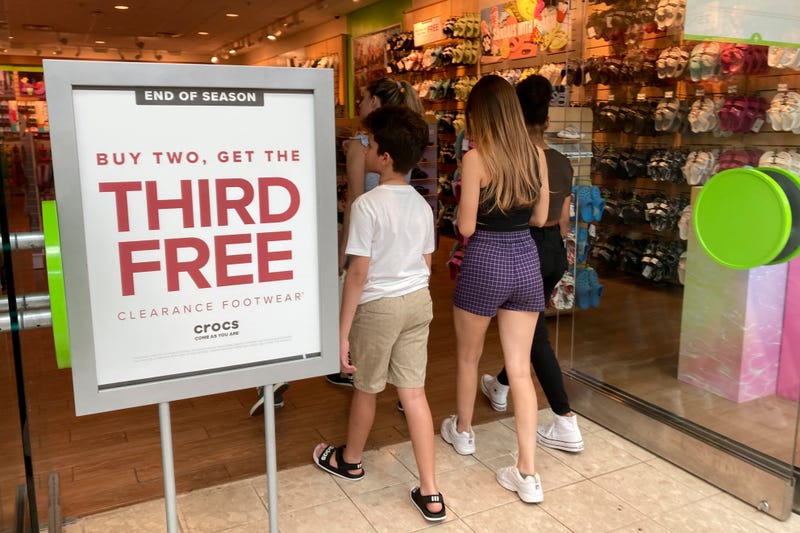 Kohl’s on Thursday slashed its sales and profit expectations for the year, a result of its stepped up price cutting to shed unwanted merchandise.

The department store chain also cut back on orders ahead of the critical holiday period, spooking investors and sending shares down almost 8%.

The news from Kohl's capped a heavy week of retail-industry corporate earnings, and the results were mixed.

Kohl's has struggled for years, and last month it called off buyout talks with Franchise Group, the owner of Vitamin Shop, citing economic conditions.

Americans are under strain from inflation hovering near four-decade highs, and that played out in the financial performance at Kohl's and almost every other retailer in the recent quarter.

Soaring prices have forced families to grow more cautious with spending, cutting back on new clothing, electronics, furniture and almost everything else that is not absolutely necessary.

Exacerbating the problem for retailers, Americans' spending habits have as the pandemic eases have shifted faster than anyone expected. After being cooped up at home, U.S. consumers seemed to shift almost overnight to spending on restaurants, shows or travel.

Those same forces have tripped up retailers that sailed through the pandemic, posting record sales. Both Target and Walmart released quarterly earnings this week and they too are wrestling with inflation and shifting demand.

On Wednesday the Commerce Department reported that retail sales were flat last month after having risen 0.8% in June. Sales fell 0.5% at department stores and 0.6% at clothing stores.

That has left retailers with huge inventories of TVs, stereos, laptops, and clothing that perhaps is too casual for nights out or work, forcing them to slash prices.

And because of inflation, there is clear evidence that many families are trading down when they shop. More are opting for private-label brands, which are typically cheaper, over national brands. They're limiting their trips to the store and buying less when they show up. They're swapping out things like deli meats for cheaper foods like hot dogs.

Kohl’s has been among the most vulnerable because it sells mostly discretionary items like clothing, and it caters largely to middle-income shoppers who've been hit hard by rising prices.

“Our second-quarter results reflect a middle-income customer that has become more cost conscious and is feeling greater pressure on their budgets,“ CEO Michelle Gass said. ”Therefore, we are seeing customers make fewer shopping trips, spend less per transaction and shift towards our value-oriented private brand."

June, when the average price for a gallon of gas in the U.S. surpassed $5, was the most difficult month of the quarter, Gass said. She noted that interestingly, Kohl's is seeing more higher-income shoppers, and they're spending more.

Yet industry analysts say missteps by Kohl's has put it in a vulnerable position.

Neil Saunders, managing director at GlobalData Retail said Kohl's “has lost the plot" in terms of merchandising and appears to be pursuing a seemingly random approach when it fills its store shelves. The result has been a “jumble of disjointed product in stores, which is exacerbated by a very serious deterioration in shopkeeping standards."

Sales at Kohl’s Corp. fell to $4.09 billion in the second quarter compared with $4.45 billion during the same stretch last year.

Sales at stores open at least a year, a key gauge of a retailer’s health, slumped 7.7%.

That is well short of Wall Street's per share projections of $4.04.

Tapestry, which owns such Coach and Kate Spade, also issued a slightly pessimistic outlook for the year, but it cited COVID-19 lockdowns in China, where it has sizeable operations.

The company's quarterly sales were essentially flat at $1.6 billion, but rose 15% to $6.7 billion for its full fiscal year.