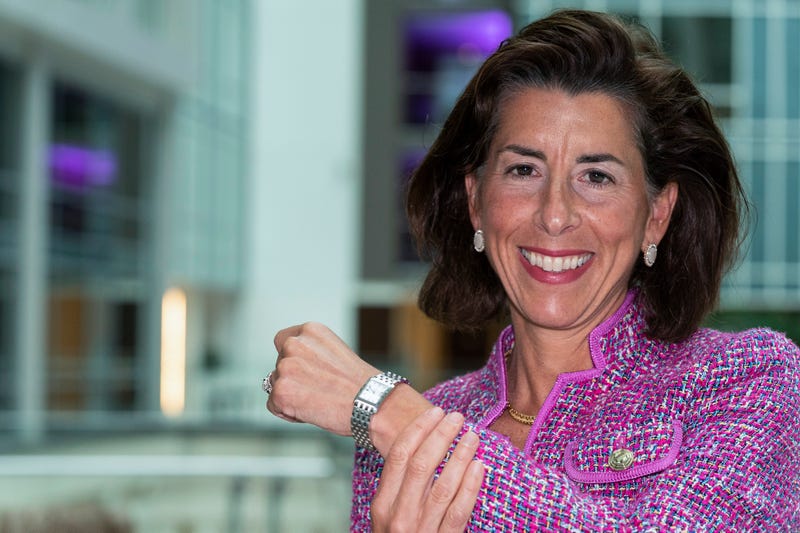 WASHINGTON (AP) — Gina Raimondo only wears watches made by Bulova — a company that laid off her scientist father, closed its Rhode Island factory and moved production to China in 1983.

The watches give Raimondo, the U.S. commerce secretary, a sense of mission as President Joe Biden's de facto tech minister, a responsibility that is focused on adding the kinds of cutting-edge factory jobs that are now abroad.

“It’s been a tribute to my dad," Raimondo said of her watch choices in an interview, “and a reminder to me that we need to do more to get good manufacturing jobs in America.”

Biden has tasked Raimondo, a former Rhode Island governor, with ensuring the United States will be the world leader in computer chips. America’s place atop the world as an economic and military power — as well as his political fortunes — might ride on her performance.

The computer chip has become the essential ingredient for autos, medical devices, phones, toys, washing machines, weapons and even some watches. But a global shortage is dragging on growth and fueling inflation. Without computer chips that serve as the switches for today's economy, the United States could be eclipsed by China and other nations that support their semiconductor industries.

To end the shortage, Raimondo, 50, must bring back production of chips as well as solar panels and batteries on the premise that these sectors are key to prosperity. This means consulting semiconductor executives almost daily, following data on plant shutdowns in Asia, seeking additional government support for these industries and making her department something more than a generic envoy to business.

Raimondo's tenure at Commerce has been high-profile for a department that some presidents have paid little heed.

The prior secretary was advertised as a killer negotiator, but Wilbur Ross was best known for falling asleep at events for President Donald Trump and trying to explain tariffs by holding up a soup can on TV. The Obama administration went a full year with only an acting secretary.

Raimondo bonded with Biden, who often quotes his own parents when pitching his policies. Political allies noted her own ambitions after she was interviewed last year as Biden's prospective running mate. The Commerce Department could be the stepping stone in a Democratic Party increasingly shaped by college-educated women.

“She is someone, like the president, who knows the pain a job loss has on a family, and has never forgotten where she comes from and the real impact economic and trade policies have on real people,” said White House chief of staff Ron Klain.