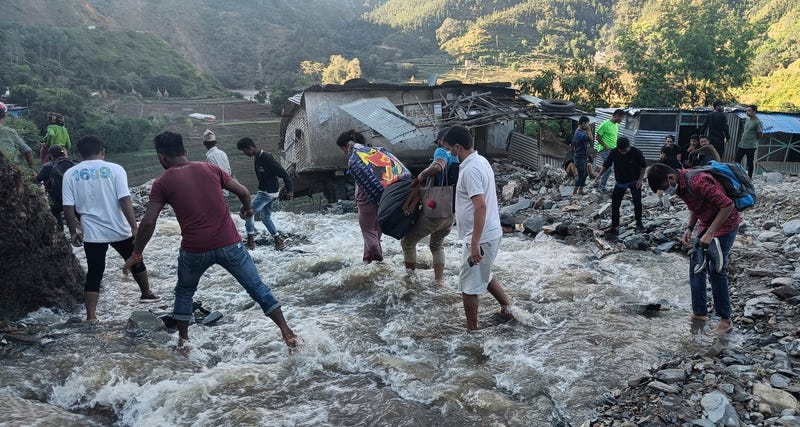 KATHMANDU, Nepal (AP) — Nepalese authorities on Friday searched for dozens of people missing in this week's heavy rains, floods and landslides, as survivors complained they were yet to receive any government help.

At least 40 others have been injured by landslides and house collapses, and another 41 people were missing, Kunwar said.

The downpour subsided in some parts and the weather is expected to improve across the Himalayan nation over the weekend.

On Thursday, Nepal's Prime Minister Sher Bahadur Deuba visited the flood-stricken areas in the western region and promised a government relief package. However, many families said they were still waiting for government supplies and facing tough times on their own.

Bhimraj Shahi, who lost six family members in landslides in remote Humla district, said rescue teams reached the site more than 10 hours after they were hit on Monday.

"Although there has been an announcement from the government, the actual help hasn’t yet arrived for the family,” said Shahi.

The disasters have wiped out crops and homes, dealing a blow to families already grappling with the devastating fallout of the COVID-19 pandemic, said Azmat Ulla of the International Federation of Red Crescent Societies in Nepal. Red Cross teams were aiding evacuation efforts in both countries.

“The people of Nepal and India are sandwiched between the pandemic and worsening climate disasters, heavily impacting millions of lives and livelihoods,” he added.

Kunwar said rescue teams have been relocating people to safer locations and taking dozens of injured to hospitals.

Authorities were still trying to ascertain the number of displaced and the full extent of damage.

Landslides and floods are common in India’s Himalayan north. Scientists say they are becoming more frequent as global warming contributes to the melting of glaciers.

In February, flash floods killed nearly 200 people and washed away houses in northern Uttarakhand state in India. In 2013, thousands of people were killed in floods there.