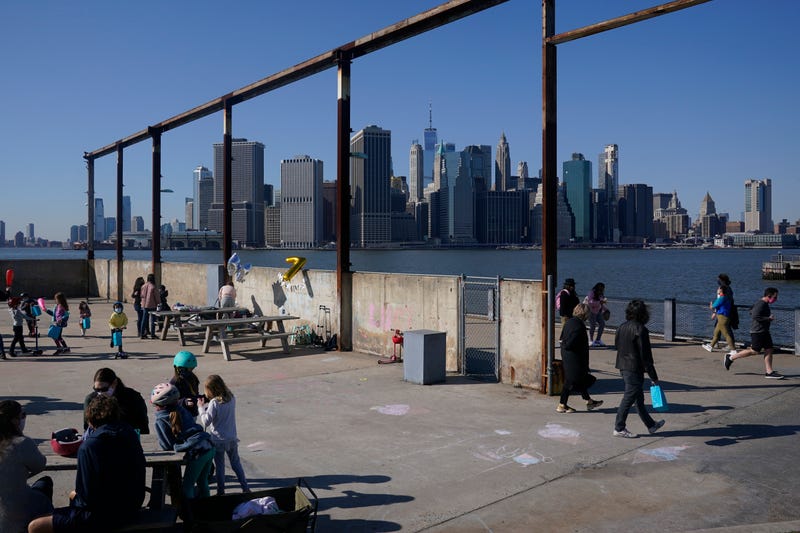 But as congressional redistricting gets underway, some of the country's most populous cities are taking prominent roles in reshaping the balance of power in Washington. And that's good news for Democrats.

Robust growth in the liberal strongholds of New York and metropolitan Chicago are poised to give Democrats an edge as their political maps are redrawn to adjust for changes in population over the past decade. While both New York and Illinois are losing congressional seats, their urban booms mean the newly drawn districts are likely to favor Democrats, adding to the party's national total and making up for probable losses elsewhere.

New York in particular is giving Democrats hope. The most populous city in the United States added some 629,000 new residents — more people than live in Wyoming.

It's a bright spot for Democrats, who had braced for a grim redistricting season. Republican-controlled states across the Sunbelt gained four U.S. House seats — as well as a new seat in Montana — leaving some analysts to predict House Democrats could be relatively easily gerrymandered out of power. Arizona, Florida, Georgia and Texas are among the places where Republicans are expected to use redistricting to benefit their ranks.

But census data released in July detailing the extent of urban growth, even in Northern states losing seats, offered opportunities for Democrats.

“With red states clearly going after Democratic members of Congress, New York is really a prize for the Democratic Party," said Blair Horner, the executive director of the New York Public Interest Research Group, which is closely tracking redistricting in the state. “If they can squeeze out some more districts, it could make the difference in who controls the House after the 2022 elections.”

For Democrats, who now control the House of Representative by an eight-seat margin, with three seats vacant, there is little room for error. Midterm elections generally favor the party out of power, putting pressure on Democrats to squeeze any advantage they might get out of the redistricting process triggered every 10 years by the census.

Illinois could also play an important role in that effort. Like New York, the state is losing a congressional seat. But while Chicago’s population has remained relatively flat over the past decade, its suburbs have drawn new residents, many of them Latinos who lean Democratic.

That trend, coupled with slower growth in the state's more conservative south, means Illinois Republicans are in danger of losing a pair of House seats, according to John S. Jackson, a professor emeritus of political science at Southern Illinois University in Carbondale.

“The population gains have all been in northern and northeastern Illinois, where the Democrats are going to be stronger,” he said, “and the losses have been in central and southern Illinois where we have Republicans representing us.”

The math, he said, could further diminish the Republican share of the state’s 18-member congressional delegation, where Democrats hold a 13-5 edge.

There are other places where Democrats could find help — if not for their push to put the task of drawing new political maps in the hands of independent commissions.

But some Democrats worry doing so will come at a cost, especially when Republicans control the process in 20 states, including ones expanding their congressional delegations.

A power-sharing agreement in Oregon unraveled when the House speaker, a Democrat, rescinded a deal that would have given Republicans veto power over redrawn maps expanding the state's current five-member congressional delegation to six.

Republicans immediately called foul and braced for a Democrat-led gerrymander that will allow national Democrats to add a seat.

Redistricting in California, a Democratic bedrock, may not be much a factor. Heavily Democratic Los Angeles gained about 100,000 more residents but the state's redistricting commission is among the most independent in the country. Experts say it won’t be beholden to the partisanship that often leads to gerrymandering.

While New York's redistricting commission was established as an independent panel, the Democratic-controlled Legislature has final authority over new district lines. Republicans, as well as good-governance watchdogs, are wary that Democratic lawmakers will reject new lines recommended by the commission, which is drawing new districts for the first time since it was established by voters in 2014, and devise their own lines to benefit their party.

The bipartisan commission's initial proposals released this month did little to calm those worries. It presented two sets of maps, each favoring one party over the other — essentially deadlocking rather than proposing a compromise.

New York Democrats currently have a 19-8 advantage in the state’s House delegation. It remains to be seen how the proposals released by the commission, which carved out the state into 26 congressional districts, will reshuffle the deck.

Asher Ross, who directs a redistricting advocacy campaign called “Mapping our Future" for the New York Immigration Coalition, said there was a clear breakdown in the process.

“It defeats the purpose of having an independent redistricting commission,” he said, expressing worry that a backroom deal could come at the expense of communities of color.