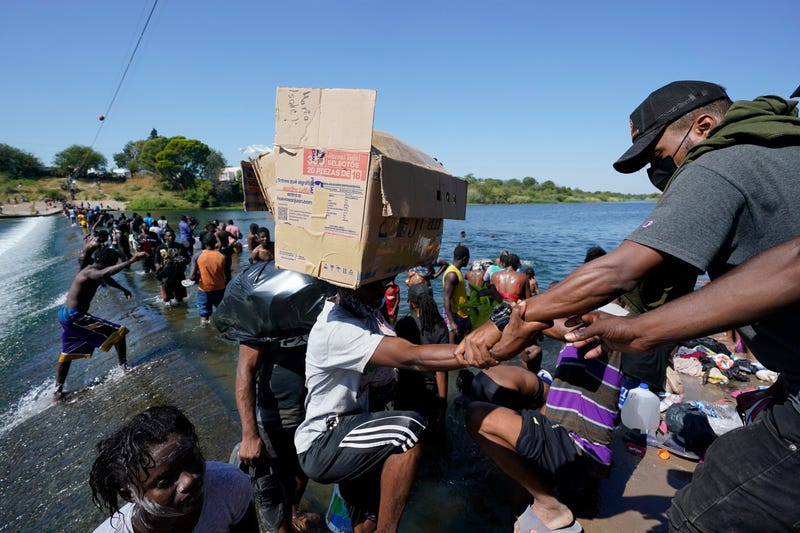 DEL RIO, Texas (AP) — The Biden administration plans the widescale expulsion of Haitian migrants from a small Texas border city by putting them on flights to Haiti starting Sunday, an official said Friday, representing a swift and dramatic response to thousands who suddenly crossed the border from Mexico and gathered under and around a bridge.

Details are yet to be finalized but will likely involve five to eight flights a day, according to the official with direct knowledge of the plans who was not authorized to discuss the matter publicly and spoke to The Associated Press on condition of anonymity. San Antonio, the nearest major city, may be among the departure cities.

Another administration official speaking on condition of anonymity expected two flights a day at most and said all migrants would be tested for COVID-19.

U.S. authorities closed traffic to vehicles and pedestrians in both directions at the only border crossing in Del Rio, Texas, after chaos unfolded Friday and presented the administration with a new and immediate challenge as it tries to manage large numbers of asylum-seekers who have been reaching U.S. soil.

U.S. Customs and Border Protection said it was closing the border crossing with Ciudad Acuna, Mexico, “to respond to urgent safety and security needs.” Travelers were being directed to Eagle Pass, Texas, 57 miles (91 kilometers) away.

Haitians crossed the Rio Grande freely and in a steady stream, going back and forth between the U.S. and Mexico through knee-deep water, with some parents carrying small children on their shoulders. Unable to buy supplies in the U.S., they returned briefly to Mexico for food and cardboard to settle, temporarily at least, under or near the bridge in Del Rio, a city of 35,000 that has been severely strained by migrant flows in recent months.

Migrants pitched tents and built makeshift shelters from giant reeds known as carrizo cane. Many bathed and washed clothing in the river.

The vast majority of the migrants at the bridge on Friday were Haitian, said Val Verde County Judge Lewis Owens, who is the county's top elected official and whose jurisdiction includes Del Rio. Some families have been under the bridge for as long as six days.

Trash piles were 10 feet (3.1 meters) wide, and at least two women have given birth, including one who tested positive for COVID-19 after being taken to a hospital, Owens said.

The flight plan, while potentially massive in scale, hinges on how Haitians respond. They may face a choice: stay put at the risk of being sent back to their impoverished homeland -- wracked by poverty, political instability and a recent earthquake — or return to Mexico. Unaccompanied children are exempt from fast-track expulsions.

About 500 Haitians were ordered off buses by Mexican immigration authorities in the state of Tamaulipas, about 120 miles (200 kilometers) south of the Texas border, the state government said in a news release Friday. They continued toward the border on foot.

Haitians have been migrating to the U.S. in large numbers from South America for several years, many of them having left the Caribbean nation after a devastating earthquake in 2010. After jobs dried up from the 2016 Summer Olympics in Rio de Janeiro, many made the dangerous trek by foot, bus and car to the U.S. border, including through the infamous Darien Gap, a Panamanian jungle.

It is unclear how such a large number amassed so quickly, though many Haitians have been assembling in camps on the Mexican side of the border, including in Tijuana, across from San Diego, to wait while deciding whether to attempt to enter the United States.

An administration official, who was not authorized to address the matter publicly and spoke on condition of anonymity, said the action is not targeting Haitians speci