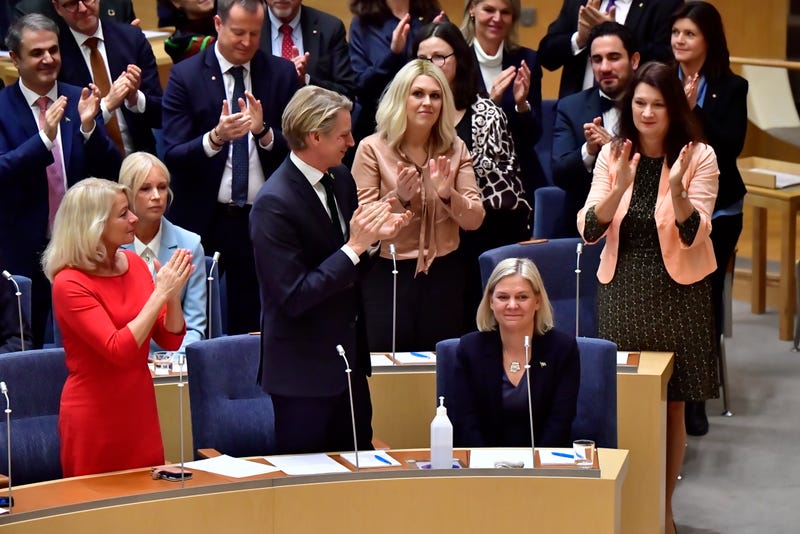 COPENHAGEN, Denmark (AP) — Magdalena Andersson, who last week was Sweden’s first female prime minister for a few hours before resigning because a budget defeat made a coalition partner quit, was on elected again on Monday as the Nordic nation's head of government.

In a 101 -173 vote with 75 abstentions, the 349-seat Riksdag elected Andersson, leader of the Social Democrats, as prime minister. She will form a one-party, minority government. Her Cabinet is expected to be named Tuesday. Formally, she will be installed following an audience with King Carl XVI Gustav, Sweden's figurehead monarch.

Andersson served as prime minister for seven hours before stepping down last week after the Greens left her two-party coalition. Their move followed the rejection of her government’s budget proposal in favor of one presented by opposition parties including the right-wing populist Sweden Democrats, who are rooted in a neo-Nazi movement.

Under the Swedish Constitution, prime ministers can be named and govern as long as a parliamentary majority — a minimum of 175 lawmakers — is not against them.

“It feels good and I am eager to start,” Andersson said of her appointment.

Andersson who was finance minister before becoming prime minister, said she would present her government policies Tuesday when her Cabinet is named. However, she said she has she had three priorities — welfare, climate and combating violence. Sweden has seen a rise in organized crime activity in the past few years and several gang-related shootings have occurred in the three main cities, Stockholm, Goteborg and Malmo.

Andersson repeated she would govern Sweden with the opposition’s budget which was was based on the government’s own proposal but of the 74 billion kronor ($8.2 billion) that the government wanted to spend on reforms, just over 20 billion kronor ($2.2 billion) will be redistributed next year. The approved budget aims at reducing taxes, increased salaries for police officers and more money to different sectors of Sweden’s judiciary system.

In a speech to parliament, Center Party leader Annie Loof said a female prime minister “means a lot to many girls and women, to see this glass ceiling shattered. I am proud that (the Center Party) is involved and makes this possible.” Her party abstained from voting for or against Andersson, paving the way for her election.

Andersson’s appointment as prime minister had marked a milestone for Sweden, viewed for decades as one of Europe’s most progressive countries when it comes to gender relations, but which had yet to have a woman in the top political post.

With 10 months to the next election, Andersson said, smiling, that she hopes to hold the job for 10 years.