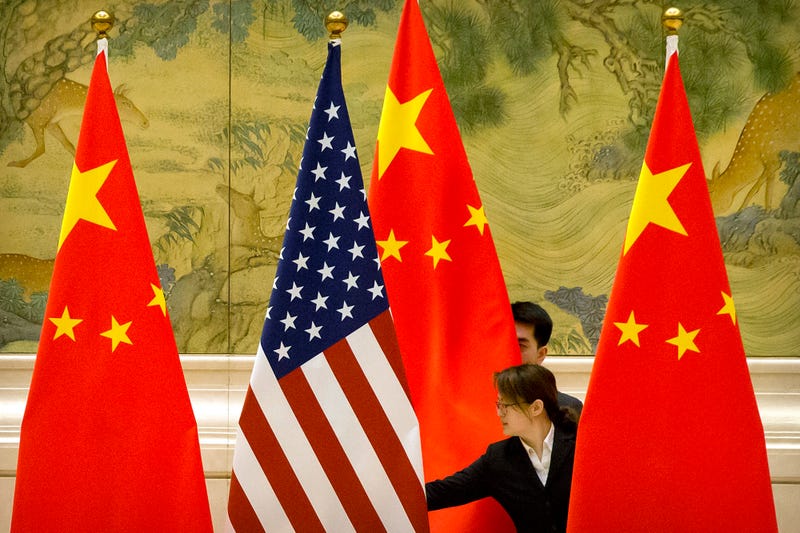 WASHINGTON (AP) — For nine months under President Joe Biden, the U.S. has pursued a diplomatic strategy that could be characterized as about China, without China.

On security, trade, climate and COVID-19, the Biden White House has tried to reorient the focus of the U.S. and its allies toward the strategic challenges posed by a rising China — all while there has been little direct engagement between the two rivals.

The president is now preparing for a pair of global summits where he again won't be meeting with China’s Xi Jinping but the tensions and aggravations between the world's two largest economies will nonetheless be on ready display.

Biden heads first to the Group of 20 summit in Rome this weekend after months of still-unresolved negotiations over his proposals to invest billions more in U.S. workers and key industries. He's promoted those policies by offering them as the solution to a generational threat posed by China and by exhorting the rest of the world to join his cause.

But Xi has chosen to skip the G-20 — and a next-up summit on climate in Scotland — because of COVID-19, an absence that might be the most consequential aspect of the gatherings, as the world waits to see what China's commitments will be to cutting greenhouse gas emissions. Instead, the Chinese leader will participate virtually in some events, missing the informal pull-asides and conversations that often yield the most progress at international summits.

Since he took office in January, Biden has spoken to Xi just twice, though they have agreed to meet virtually at some point by the end of the year. The U.S. leader aimed to prioritize shoring up America's domestic and international positioning before seeking a direct one-on-one with Xi, but now there appears to be a tinge of regret that a meeting won't take place sooner.

“In an era of intense competition between the U.S. and China, intense diplomacy at the highest levels, leader-level diplomacy is vital to effectively managing this relationship,” White House national security adviser Jake Sullivan said Tuesday as he previewed the trip.

Yet China is never far from Biden’s mind. And the president wants it at the forefront of voters' thoughts too.

He hints at the ascendant power in nearly every speech he delivers. He invokes the need to counter and cajole China in major policy pronouncements on everything from the U.S. withdrawal from Afghanistan to his ongoing push for trillions in domestic infrastructure and social spending.

“In the race for the 21st century between democracies and autocracies, we need to prove that democracies can deliver,” Biden said this summer as he pledged American COVID-19 vaccines for the world. He heralded the same “great debate” over the effectiveness of democracies earlier this month as he made the case for Congress to swiftly raise the nation’s debt limit.

"Our infrastructure used to be the best in the world," Biden said this month, as he pitched his spending bills, arguing that passing his priorities was about more than mere symbolism. “Twelve other nations have superior infrastructure to us, and China has trains that go 230 miles an hour for long distances."

Yet the painful months-long slog of negotiations over his spending package, which includes hundreds of billions to help the U.S. shift away from fossil fuels, may hamper Biden's ability to pressure China to make its own environmental commitments. China has ramped up coal production amid r