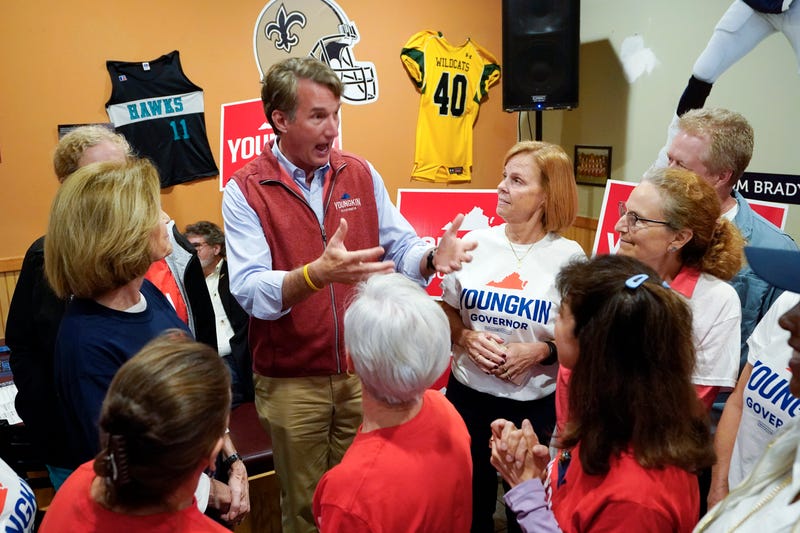 ASHLAND, Va. (AP) — Glenn Youngkin wants voters in Virginia to hear an urgent message: Your children are in danger.

In a speech in Northern Virginia's suburbs last week, the Republican candidate for governor highlighted the murky case of a student who allegedly committed sex crimes in two area schools. He said the incidents, which have sparked community outrage, are the result of failed Democratic leadership.

“What other tragedy awaits Virginia’s children?” an atypically grim-faced Youngkin asked from the podium, flanked by a collection of parents and schoolchildren.

On the eve of the Nov. 2 election, Youngkin's dark message represents a new front in his monthslong push to repair the Republican Party's standing in the suburbs, where college-educated moms and dads forcefully turned against Donald Trump's GOP.

Shying away from Trump and his divisive rhetoric for much of the year, Youngkin has adopted a suburban strategy that instead emphasizes an approachable image and “kitchen table" issues like taxes, public safety and education. He's also tried to link his education platform to the frustrations of Virginia activist groups — many of them run by officials with former ties to the Trump administration, the Republican Party or both — already upset by school coronavirus pandemic restrictions and transgender policies, as well as classroom curricula they see as too liberal and un-American.

Youngkin's final-days focus on sexual predators in schools, hardly a widespread issue, will test the limits of his suburban outreach and provide lessons for Republicans aiming to retake control of Congress next year.

In competitive suburban districts from California to Connecticut, Republicans are heading into the midterms searching for a post-Trump playbook to rebalance the political landscape. If Youngkin wins, many GOP candidates will likely embrace his rhetoric. A loss, however, could signal that the hard-line approach has limited appeal beyond the Republican base.

Less than two weeks before Election Day in Virginia, there are signs that Youngkin's strategy is working.

Democrat Terry McAuliffe's campaign privately concedes the race is a toss-up, despite built-in advantages in a state President Joe Biden carried by 10 percentage points last fall. New polling from Monmouth University, which has the race tied, suggested that Youngkin may be gaining some support among thos