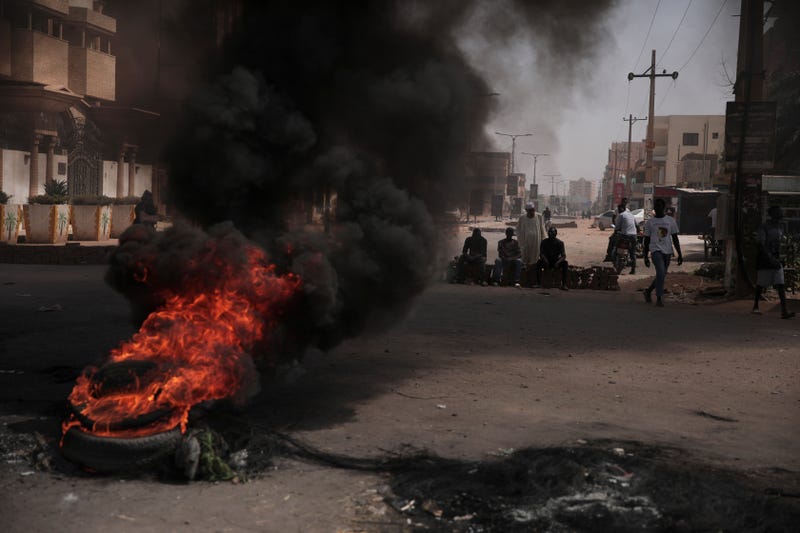 The arrests came as protests denouncing Monday’s takeover continued in the capital of Khartoum and elsewhere, and many businesses shut in response to calls for strikes. The coup threatens to halt Sudan’s fitful transition to democracy, which began after the 2019 ouster of longtime ruler Omar al-Bashir in a popular uprising.

Groups of protesters — in some places, dozens, in others, hundreds — set up barricades of stones on main roads throughout the day. Security forces waded in, chasing demonstrators and dismantling the barriers.

“It looks like a hit-and-run process, they remove, and we build,” activist Nazim Sirag said.

Some protesters were shot and wounded, activists said, though they did not have exact figures. Security forces confronting demonstrators have killed at least six people since Monday and wounded over 140 others, many in critical condition, according to physicians with the Sudan Doctors’ Committee.

“We are frustrated,” she said, “but we have no other option but the street.”

In a nod to deteriorating security conditions, the State Department authorized nonessential personnel and the families of all government employees at the U.S Embassy in Khartoum to leave Sudan “due to civil unrest and possible supply shortages.”

The coup came after weeks of mounting tensions between military and civilian leaders over the course and pace of Sudan's moves toward democracy.

The African Union suspended Sudan — an expected move typically taken in the wake of coups. The AU Peace and Security Council said via Twitter on Wednesday that the suspension would remain in place “until the effective restoration of the civilian-led Transitional Authority,” as the deposed government is known.

The AU plans to send a mission to Sudan to hold talks with rival parties.

The World Bank also suspended disbursements for its operations in Sudan, whose economy has been battered by years of mismanagement and sanctions and was dealt a blow when the oil-rich south seceded in 2011 after decades of war, taking with it more than half of public revenues and 95% of oil exports.

“We hope that peace and the integrity of the transition process will be restored, so that Sudan can restart its path of economic development and can take its rightful place in the international financial community,” bank President David Malpass said in a statement.

Prime Minister Abdalla Hamdok's now-deposed government had embarked on a series of reforms meant to transform the country’s economy and have the nation rejoin the international community after over two decades of isolation under al-Bashir.

In May, the World Bank said it had allocated $2 billion to Sudan to finance big infrastructure projects along with others over the next 12 months, after the U.S. provided bridge financing of $1.15 billion to Cleese Sudan’s overdue payments to the global financing body.

Following widespread international condemnation, the military allowed Hamdok and his wife to return home on Tuesday night. Hamdok, a former U.N. economist, was detained along with other government officials when the military seized power.

Several Western embassies in Khartoum said Wednesday they will continue to recognize Hamdok and his Cabinet as “the constitutional leaders of the transitional government” of Sudan.

In a joint statement, the embassies of the European Union, the U.S., the U.K., France and several other European countries called for the release of other detained officials and for talks between the military and the pro-democracy movement.

EU foreign affairs chief Joseph Borrell tweeted that he spoke with Hamdok on Wednesday to voice his support for the return of a civilian-led transitional government as “the only way forward.”

“We don’t want Sudan to go back t