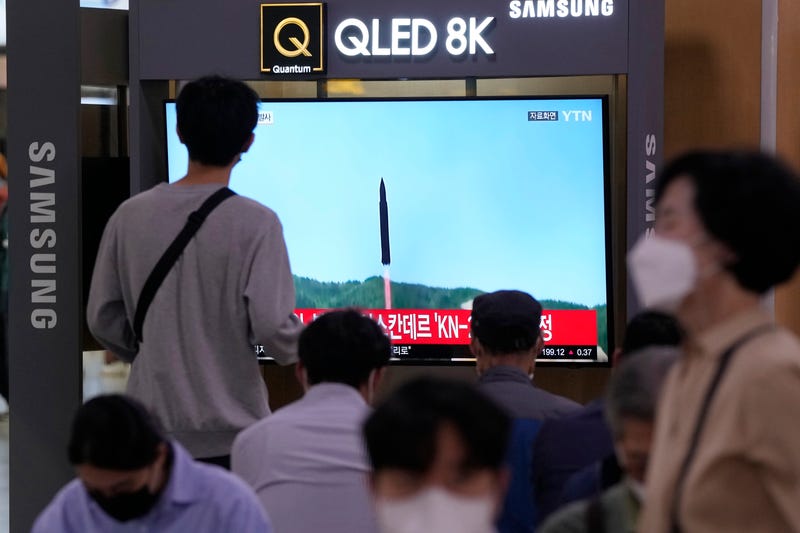 Seoul's Joint Chiefs of Staff said in a statement that the North Korean missiles lifted off 10 minutes apart on Wednesday afternoon from its capital region and flew toward the waters off its east coast.

Ino said that “North Korea’s repeated missile firings amid (Russia’s) invasion of Ukraine is impermissible.” The South Korean Joint Chiefs of Staff said North Korea's provocations would only deepen its international isolation while pushing South Korea and the United States to strengthen their deterrence.

The launches follow a missile test by North Korea earlier this week.

Harris is to arrive in South Korea on Thursday for talks with President Yoon Suk Yeol and other officials. She also is to visit the tense border with North Korea, in what U.S. officials call an attempt to underscore the strength of the U.S.-South Korean alliance and the U.S. commitment to “stand beside” South Korea in the face of any North Korea threats.

U.S. and South Korean navy ships were also conducting drills off South Korea’s east coast in a show of force against North Korea.

The four-day exercise, which began Monday, involves the nuclear-powered aircraft carrier USS Ronald Reagan. It is the first training exercise by the allies involving a U.S. aircraft carrier near the Korean Peninsula since 2017.

South Korea-U.S. joint military exercises often draw a furious response from North Korea, which views them as an invasion rehearsal. A short-range North Korean missile launched Sunday was seen as a response to the U.S.-South Korean training.

South Korea and Japan estimated that the North Korean missiles fired Wednesday flew 300-360 kilometers (185-220 miles) with a maximum altitude of 30-50 kilometers (19-30 miles). The low trajectories resembled the flight of the missile fired on Sunday, which some analysts said was likely a nuclear-capable, highly maneuverable weapon modeled after Russia’s Iskander missile.

In recent years, North Korea has been adding Iskander-like missiles and other solid-fuel weapons to its arsenal. Some experts say the weapons are designed to carry battlefield nuclear warheads to counter the stronger conventional forces of South Korea and the United States, which stations about 28,500 troops in the South.

North Korea has dialed up its missile testing activities to a record pace in 2022, launching more than 30 ballistic weapons, including its first intercontinental ballistic missiles since 2017. North Korea's Sunan area where Wednesday's launches occurred was the site of various missile tests this year, including two ICBMs.

Earlier this month, North Korea adopted a new law authorizing the preemptive use of nuclear weapons in some situations, as it continues to escalate its nuclear doctrine. U.S. and South Korean officials have also said the North may soon conduct its first nuclear test in five years.

According to some lawmakers who attended the meeting, the National Intelligence Service said if the test occurs, it is likely to come after China, North Korea's last major ally, holds a key Communist Party congress on Oct. 16 but before the United States votes in midterm elections on Nov. 8.

The spy service also said North Korea recently began administering COVID-19 vaccines to its people for the first time, Yoo Sang-bum, one of the lawmakers present at the briefing, said without elaborating.

Earlier this month, leader Kim Jong Un told his country’s rubber-stamp parliament that North Korea would begin its rollout of vaccines. In August, he made a widely disputed claim that his country had overcome its first COVID-19 outbreak and ordered an easing of pandemic-related restrictions.