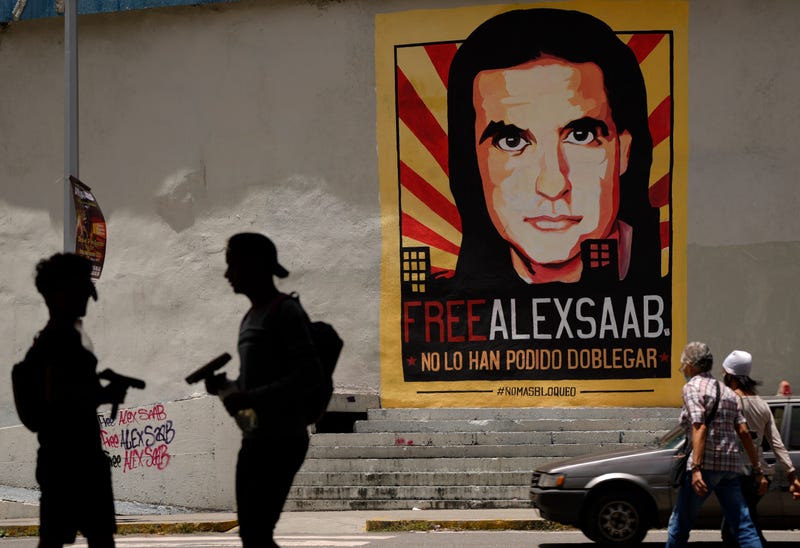 MIAMI (AP) — Venezuela’s government quietly offered last year to release imprisoned Americans in exchange for the U.S. letting go a key financier of President Nicolás Maduro, according to people with knowledge of the proposal and message exchanges seen by The Associated Press.

The offer was discussed at a previously reported meeting in Mexico City in September 2020 between a top Maduro aide and Richard Grenell, a close ally of former President Donald Trump, one of the people involved in organizing the meeting said.

The offer, which was rejected by the Trump administration, has taken on new relevance following the extradition this month to Miami of businessman Alex Saab, who prosecutors believe was the main conduit for corruption in Maduro's inner circle. In retaliation, Venezuela reimprisoned six executives of Houston-based Citgo, a subsidiary of Venezuela's state-owned oil giant, who had been under house arrest.

A little over a year ago, Maduro’s government was looking to release the so-called Citgo 6 along with two former Green Berets tied to a failed cross-border raid in exchange for Saab, according to former Miami Congressman David Rivera, who says he helped organize the meeting.

Grenell declined to say what the September 2020 meeting was about but adamantly denied it had anything to do with hostage negotiations.

“I never discussed a swap. It wasn’t something we were interested in nor was it a point of negotiation — ever,” he said in a brief statement. “The purpose of the meeting was clear to everyone who was actually negotiating."

However, Venezuela's interest in negotiating for Saab was corroborated by another individual with knowledge of the proposal on the condition of anonymity to discuss the private diplomatic effort. The AP also saw text messages from right after the meeting between some of the organizers — but not Grenell — in which follow-up steps for a deal to return the American prisoners is discussed.

Rivera's account raises fresh questions about the nature and scope of the back-channel diplomacy. It’s also likely to add pressure on the Biden administration, which is already facing criticism for not doing enough to bring home Americans wrongfully detained abroad, to pursue a prisoner deal of its own with Maduro — something it has resisted until now.

Among new details to emerge: Grenell was joined in Mexico City by Erik Prince, the founder of controversial security firm Blackwater and whose sister, Betsy DeVos, was Trump’s education secretary.

In Rivera's telling, he was asked to get involved by Raul Gorrín, a Venezuelan businessman who had been trying to bridge differences between the U.S. and Maduro before being indicted himself on charges of bribing top Maduro officials. Rivera, a Republican who served a single term in Congress, said he was a translator in encrypted conference calls over Wickr, a messaging app, ahead of the meeting in which Gorrín explained to Prince that Maduro was willing to swap the Americans for Saab.