Now that the month of March is wrapping up, we're inching closer and closer to the Jacksonville Jaguars officially being on the clock. Over the past few weeks, we saw Deshaun Watson sign a massive deal with the Browns, Russell Wilson getting traded to Denver, Matt Ryan packing his bags to Indy, and Baker Mayfield being left as the odd man out in all of this. During the time of writing this, Tyreek Hill is now a Miami Dolphin. It's safe to say there is never an offseason in the NFL.

With all of the movement taking place throughout the league, we will explore which teams will fill their quarterback needs and much more in our latest 2022 NFL Mock Draft: 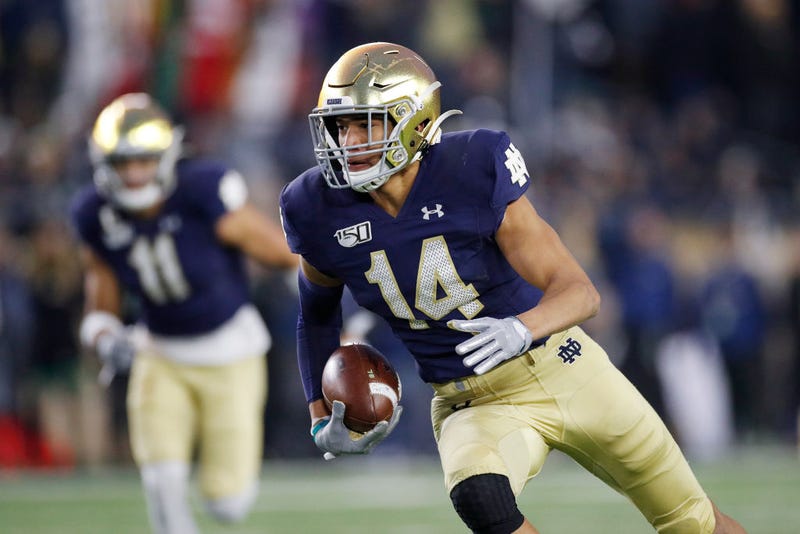 The Jets select the talented safety out of Notre Dame with the No. 4 pick

It's very rare that a safety of Kyle Hamilton's pedigree comes out of college and projects as a top 10 talent in the entire draft class. For a perennially struggling franchise like the New York Jets, their secondary may have been one of their biggest weakness last season. According to PFF, the J-E-T-S finished the 2021 season with the second-worst secondary in the NFL, allowing more EPA (Expected Points Allowed) per pass than any other defense in the regular season.

That stat should be no surprise considering everyone who played a bulk of the Jets snaps in the secondary was either undrafted or a Day 3 pick. With New York's only competent corner Marcus Maye signing with the New Orleans Saints in free agency, Hamilton would provide a skillset that the franchise hasn't seen since Jamal Adams. Oregon's Kayvon Thibodeaux will likely be available at No. 4 which is another option for Jets GM Joe Dogulus to explore, but I think Hamilton's ball-hawking ability is just too good for New York to pass up on. 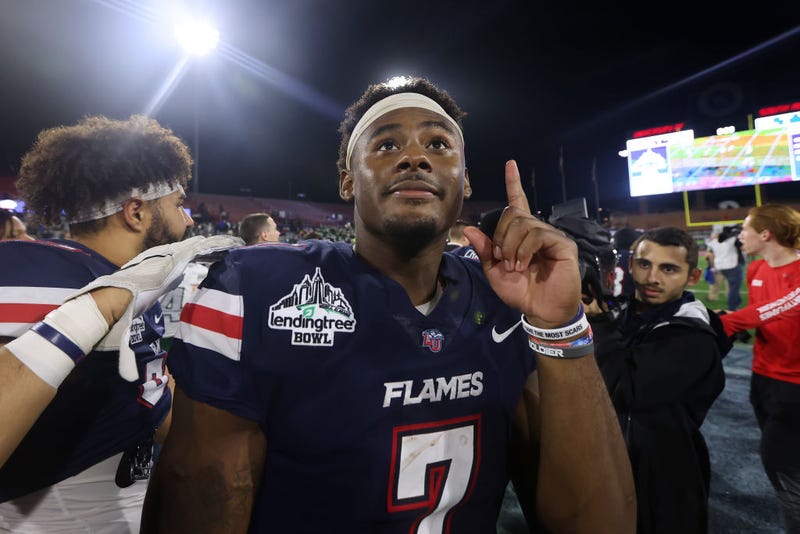 This is where the draft gets interesting in my opinion. Three teams from 6-9 (Seahawks, Panthers, and Falcons) are all in need of a quarterback. Pete Carroll seems content with Drew Lock... at least for now, that leaves Atlanta and Carolina deciding between the two best signal-callers in this year's draft class, Kenny Pickett or Malik Willis.

Willis had an electric pro day that featured throws like this where he threw a 65-yard bomb while on the move to hit his receiver for a touchdown. As for Pickett, his hand size and long-term success at Pitt are still big concerns for GMs and scouts. Willis is the most polarizing player in this draft with his own set of concerns. He is below average in height and weight at the position (listed at a generous 6' flat and 225 lbs) and his ability to run a complex offense have come into question after his coaches at Auburn criticized Willis for having a lack of interest in studying defenses and the nuances of the offense.

I think the Panthers will ultimately pull the trigger on Pickett leaving the Falcons in the prime position to select their replacement for Matt Ryan. Falcons GM Terry Fontenot was in attendance at Willis' pro day along with Steelers coach Mike Tomlin who had dinner with the young QB. Something to watch out for is the Steelers potentially trading up in the draft to grab Willis, it just depends on how sold they are on him.

Atlanta signing Marcus Mariota to a two-year deal provides a bit of a cushion for Willis if they draft him, especially considering that the Falcons are in full rebuild mode and won't be a threat to make the playoffs. 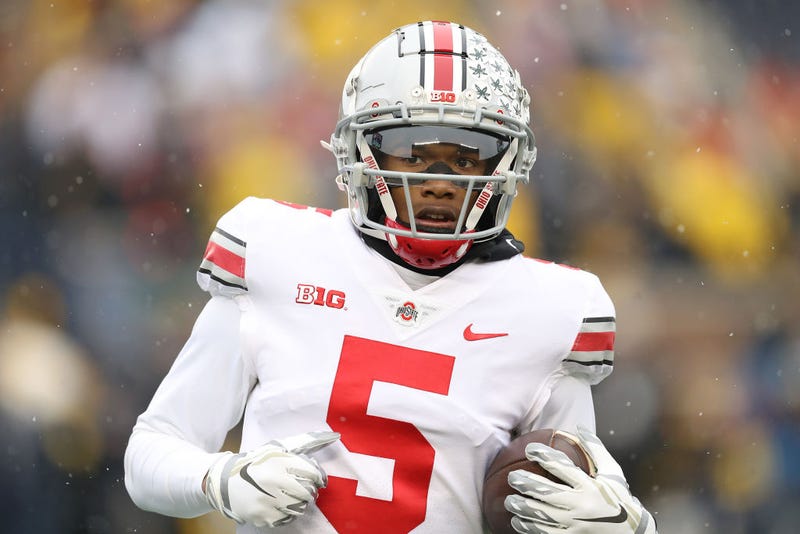 The Browns shocked the NFL world when they signed Deshaun Watson to a five-year, $230 million guaranteed deal. Now that they have the controversial yet talented quarterback on their roster, they need to find him some more weapons to work with. After losing Odell Beckham Jr. and Jarvis Landry, the speedy Garrett Wilson would make a wonderful target for Watson.

His 2021 season at Ohio State saw Wilson snag 70 receptions for over 1000 yards and 12 touchdowns. Wilson has 4.3 speed with the ability to do anything out of the slot. If the reigning Pac-12 Offensive Player of the Year Drake London is still available after the No. 10 pick, Browns GM Andrew Berry and co will have a tough decision to make considering Jackson's elite length (6’4”) and verstality.

Thanks to Howie Roseman managing to work some magic and get three-first-round picks in this year's draft, Trent McDuffie out of Washington would give the birds another capable defensive back to complement Pro Bowler Darius Slay, who turned 31 this year. 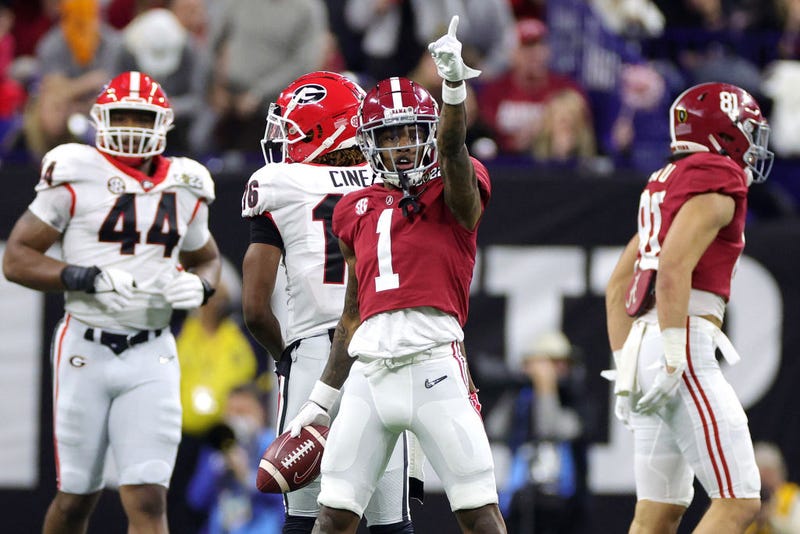 Despite his injury in the National Championship Game, the Eagles add another receiver from Alabama in Jameson Williams. Photo credit Getty Images

Saints and Eagles both take receivers in the first-round

The Saints and the Eagles both address needs at the receiver position, taking two guys that could both be game-changers for their franchises. If New Orleans takes Olave, they will be getting a two-time all-conference selection who led the Big Ten in touchdowns (13) last season. If the Eagles select Williams, that would be Roseman's second receiver he's drafted from Bama. Williams is a deep-threat receiver with elite speed and a quick first step. Unfournatley, whichever team ends up drafting Williams, they will have to wait as he is still recovering from a torn ACL he suffered during Bama's National Championship loss to Georgia.

David Ojabo was a beast at Michigan, but even after he tragically tore his Achilles during UM's pro day, I don't see the Bolts passing up on paring Joey Bosa with another elite pass rusher. Pittsburgh provides the first shocker of the draft, taking Sam Howell with Willis getting drafted earlier by Atlanta. Even if the Steelers don't draft Willis, they will surely need an insurance policy if the Mitch Trubisky-Mason Rudolph situation doesn't work out 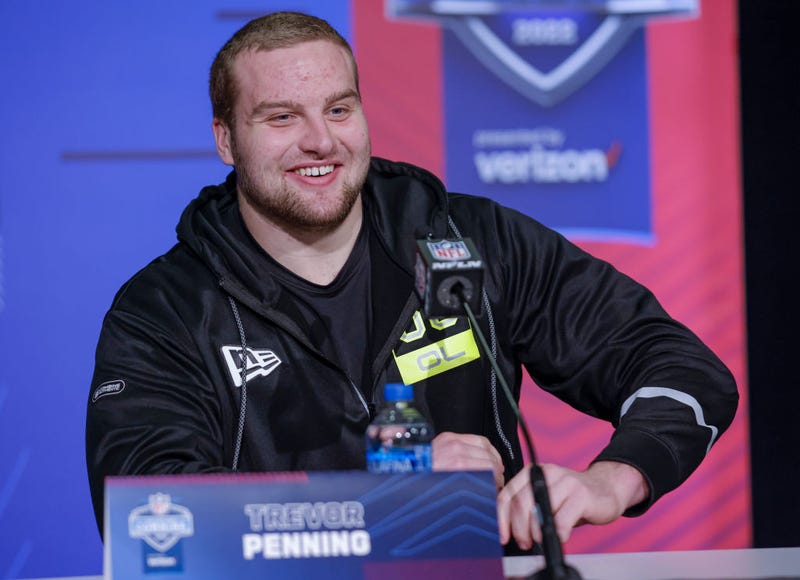 With La'el Collins heading to Cincinnati and Tyron Smith getting older and can not be relied on because he's always injured, Dallas suddenly needs a tackle very badly. Trevor Penning has massive size and good athleticism to go with it. Yes, he played at FCS Northern Iowa but if that's any indicator of his skillset, the Buccaneers would have never wasted a second-round pick on Ali Marpet, who played at D3 Hobart and turned into a Pro Bowl guard in his final season in the NFL before calling it quits.

It's safe to say JJ Watt is no longer the player he used to be. With only a year left on his contract with Arizona, George Karlftis who was a First-Team All-Big Ten performer at Purdue can add some depth to the defensive line. Karlftis is a tackling machine and can also rush the quarterback accounting for 14 sacks in his three years in Lafayette, with one of those seasons being shortened by COVID. 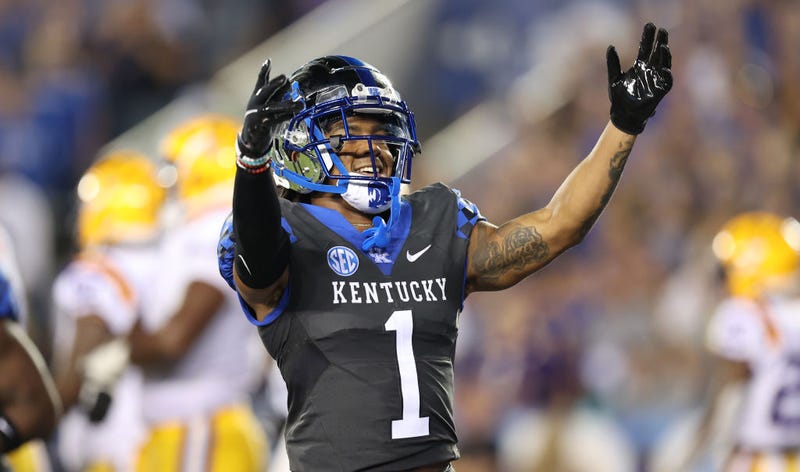 The Chiefs find their replacement for Tyreek Hill in Wan'Dale Robinson.

Now that Tyreek Hill is out of Kansas City, Patrick Mahomes is not exactly void of weapons, but the Chiefs could potentially find Hill's replacement in Kentucky's Wan'Dale Robinson. The speedy receiver did all for the Cats in 2021, earning Second-Team All-SEC while accounting for almost 1500 yards from scrimmage. With comparable measurements to Hill (5'11 185 pounds) and somewhat comparable speed (4.44), Robinson could very well fill Hill's shoes as the Chiefs' new go-to deep threat. 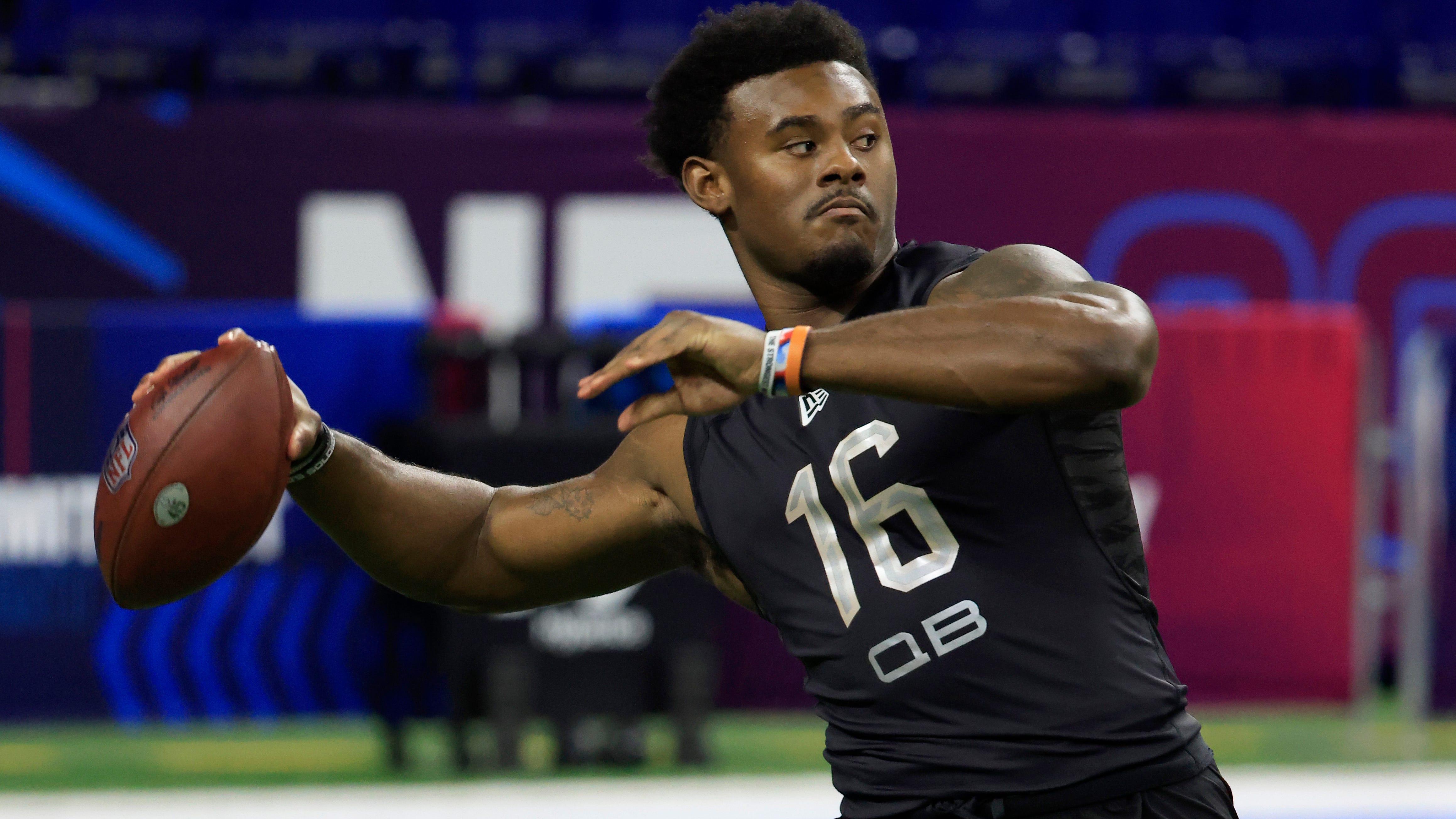