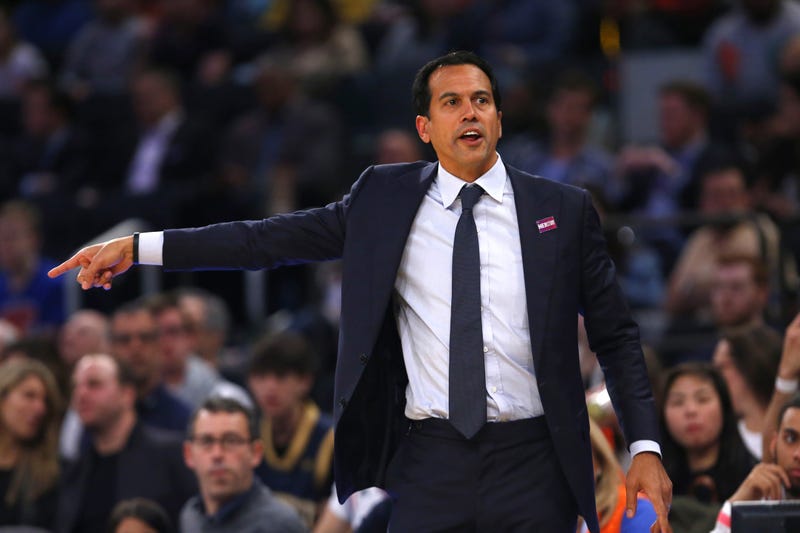 The day NBA fans have waited for since March has arrived. Basketball is officially back tonight as Zion Williamson and the Pelicans kick off the NBA’s restart in the Orlando bubble.

The Miami Heat, currently the 4 seed in the Eastern Conference after posting a 41-24 record through March 11, will play the first of their eight seeding games this Saturday vs the Denver Nuggets.

Despite posting a 1-2 record in their three scrimmage games prior to the official restart, the Erik Spoelstra-led squad is hopeful they will pose a serious threat to the first place Milwaukee Bucks led by Giannis Antetokounmpo.

Today, ESPN’s NBA insider Brian Windhorst credited Heat head coach Erik Spoelstra as someone who can make the most out of any situation.

“Every year, the way the Heat play at the end of the season versus how they were playing at the beginning is completely different because Spoelstra has gotten his hands dirty and figured it out,” Windhorst added. “In this situation, it is ideal to have a coach like that.”

While Spo has certainly squeezed the most out of depleted and undermanned rosters in the past, the unprecedented situation facing the 12-year head coach in the NBA bubble will certainly be a challenge. Windhorst’s faith in Erik Spoelstra only goes so far, citing a lack of continuity and having “guys that were sick” as concerns for the team.

Adebayo did join the Heat in the Orlando bubble and started in Miami’s final scrimmage game versus Memphis on Tuesday. Questions surrounding the All-Star are no longer if he will be able to play (Bam is expected to start Saturday) but instead, when will Miami extend the highly coveted 23-year-old?

Windhorst makes the case for Miami waiting until 2021 to extend Adebayo below:

Listen to ⁦@WindhorstESPN⁩ explain to Hoch and Crowder why the Heat may want to wait until 2021 to extend Bam Adebayo even though Bam is available for an extension at the conclusion of this season. pic.twitter.com/ZE1Hzpsrd2

No matter when the extension comes, there is no longer any doubt that the Heat organization have become specialists at finding talent and grooming young players. Bam Adebayo is just one name on a long list of young players Miami has found and developed into NBA role players and you don’t have to look any further than this past season for proof.

“It has been as an impressive twelve months of transactions as I’ve seen.” Windhorst added, “Brilliant management over the last twelve months by the Heat.”

To listen to all of Windhorst's comment’s on the Miami Heat, listen below: