The idea of Nick Foles coming back to the Northeast to wear a green jersey just seems so right... until you consider the fact that it may not be the midnight green uniform of the Philadelphia Eagles but the Gotham green threads of the New York Jets.

Though it's nothing more than a rumination from ESPN senior NFL reporter Jeremy Fowler — at least as far as we know — a Chicago Bears-New York Jets exchange involving Nick Foles would make a whole lot of sense, as Fowler explained in a recent article (h/t Alyssa Barbieri of Bears Wire).

"Paying a third-string quarterback $4 million in guarantees is tough for the cash-strapped Bears, and there's a clear connection to the New York Jets," Fowler writes. "GM Joe Douglas was with Foles in Philly. The Jets have zero NFL experience in their quarterback room. It's uncertain whether Foles actually wants to go to New York, but don't be surprised in New York looks into this one."

And if New York does in fact look into this possibility — which wouldn't be all that outlandish considering their depth chart contains rookie Zach Wilson, James Morgan and Mike White at the QB position — it probably wouldn't take much for the Bears to agree to a deal. Having both Andy Dalton and Nick Foles seems like an added luxury in terms of experience and depth, but it's also added weight in terms of the finances. Trading Foles, as Fowler notes, would free up $4 million in cap space.

And if you need more evidence that the Bears would be willing to deal Foles to whichever team will have him, look no further than NFL insider Adam Caplan's report from around a month ago. 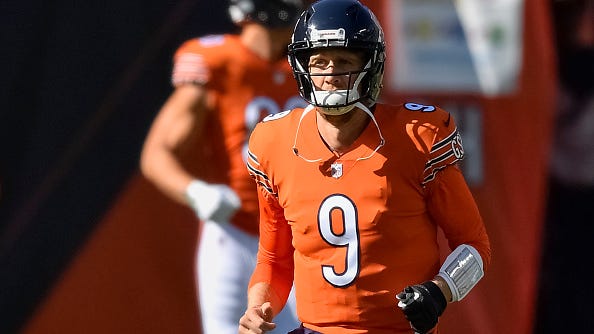