The Philadelphia Eagles went down to Washington, D.C. and came home with a dominant victory over the Commanders in Week 3. They scored 24 points in the second quarter and cruised to the 24-8 win.

Jalen Hurts threw for 340 yards and three touchdowns while the defense sacked their old friend Carson Wentz nine times. It was an impressive showing on both sides of the ball.

Danny Parkins and Andrew Fillipponi of the Audacy Original Podcast “1st & Pod” talked about the Eagles’ impressive start and whether their offense or defense has stood out more.

“Their offense because I was not super-high on Jalen Hurts coming into the year. I started to buy into him being a productive quarterback with the great offensive line there and bringing A.J. Brown in but I thought he was going to be more of a passenger along for the ride, that he was not going to be the central figure or the key player. I’ve just really liked what I’ve seen from him through three games,” Fillipponi said (10:38 in player above). “It was a spectacular catch, but I just loved the decision at the end of the first half to just air it out to Smith and let him go up there and make a play.”

The Eagles held a 17-0 lead with the clock winding down in the first half. They had a fourth and goal from the 2-yard line and elected to go for it. Hurts found Smith, who made a tremendous catch for the Birds’ third touchdown of the quarter.

Smith finished the game with 169 yards on eight catches, including that touchdown grab.

“(Smith) had such a big game that if you pair him with Brown and then Goedert at tight end, they’re not going to get their quarterback killed because they protect him well,” Fillipponi continued. “S–t, that is a really good team, and if Miles Sanders can’t get it done then you go to Gainwell. There are bodies at running back. There’s just a ton of depth there… They got options. They’ve actually got a backup that’s like a 1A-type.”

Parkins agreed that the offense has been more impressive, but defense is catching up.

“I think it’s the offense also, but just by a little, because that first week of the season was weird with the Lions having 180 rushing yards on ‘em, 38-35, that was probably the weirdest score of Week 1,” Parkins said. “But since then, (Sunday) against the Commanders they allowed eight points and 240 yards of offense, and then that Monday night game against Minnesota they allowed seven points, 264 yards of offense, and Jefferson only had 48 yards on 12 targets. They’ve shown an ability to be great. Hurts has accounted for over 300 yards of offense – combined passing and rushing – in all three games. They’ve shown an ability to be great on both sides of the ball.”

The defense has looked much better since that Week 1 victory in Detroit. They’ve shown their potential over the last two weeks, particularly last week against Minnesota.

“Offensively it’s been 3-for-3 and defensively it’s been 2-for-3, but I think the single most impressive thing that they did is what they did to Jefferson in that Monday night game at home,” Parkins continued. “That was a true home-field advantage and they took a guy who after Week 1 looked like he was going to set the receiving yards record, they took him completely out of the game. And Washington’s offense had been good. They had been really good. I felt (Sunday) was – it’s tough to be a statement game against a team that nobody thought would be more than like an eight-win team – but I thought they were just very, very impressive and continue to be.”

The Eagles will look to continue their impressive start with former Super Bowl winning head coach Doug Pederson and his Jacksonville Jaguars coming to town in Week 4. 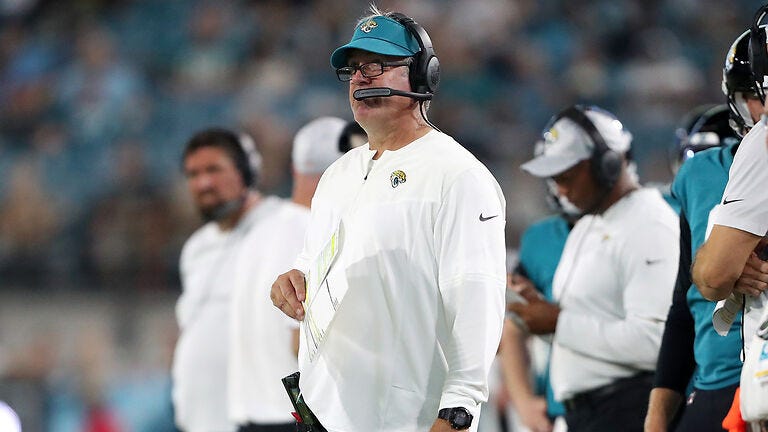 Nick Sirianni salutes Doug Pederson: 'He did something in this city that I hope to do'