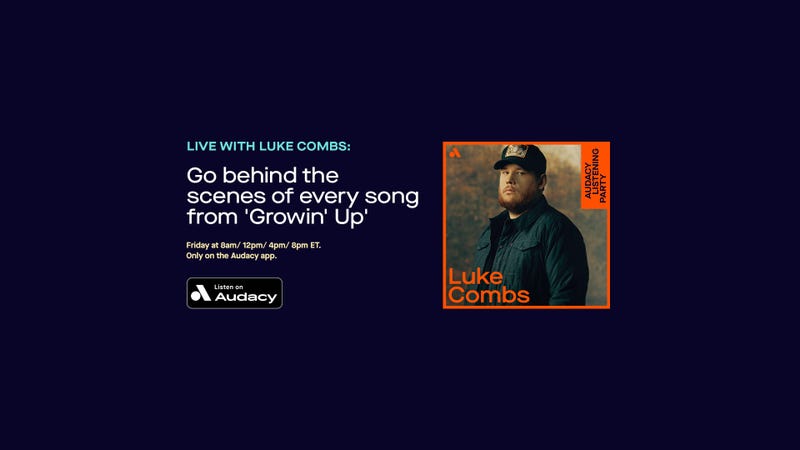 It’s finally here! Luke Combs has officially released his highly-anticipated third studio album, Growin’ Up, and he’s taking Audacy listeners behind the scenes of its creation.

LISTEN NOW: Luke Combs takes fans behind the scenes of his new album, ‘Growin’ Up’

Centered around the transition into a new phase of life, it’s only fitting Combs and wife, Nicole welcomed their first-born, a son they named Tex Lawrence, on the first day of album release week, which also happened to be Father’s Day.

“I’ve always wanted to grow up with my fan base,” Luke told Audacy’s Katie Neal of the inspiration behind the album. The people who have been listening to me since I started, they’re not college kids anymore — They’re 31 or 32 and probably married and having families or at least starting to think about those things.”

“[I’m] married, got a kid on the way, my job is obviously bigger and crazier than it’s ever been … so many things have happened so fast… I feel like I’m going from one thing and moving into the next thing and I wanted it to feel like that from a production stand point.”

Pulling inspiration from life changes, the small town he lives in and emotions brought on by the recent pandemic, Luke is ready for fans to be introduced to a new era of his music. So, crack a cold one and get ready to walk track by track through the new project with Luke himself!

Doin’ This
“I think the song really speaks to where I’m at in my life,” Luke said of the first track and lead single from the album, which has already hit #1 on the Country charts. “I think it really sets the tone.”

Any Given Friday Night
“This one was fun. Me and my wife live in a small town about an hour outside of Nashville and it’s just one of those places where Friday night is like, the night, you know? You go out. There have been a million songs written about this but having lived there, and especially over COVID, you feel like a bigger part of that community.”

The Kind of Love We Make
“Some of the things that really shaped my singing or taught me how to sing early on — it was Vince Gill and Clint Black and Garth [Brooks] and stuff like that. As I got to be 10, 11, 12 it was more like Boyz II Men, Backstreet Boys, *NSYNC kind of thing, that’s just what kids my age were listening to…. When I heard the melody to this song that they had started working on, I was immediately drawn to it because it was [like] some of the first things that drew me into singing because I just loved those melodies so much and I think that’s why I fell in love with this song.”

On the Other Line
“I’ve always loved kind of that like, a little bit silly, tongue and cheek, like early Brad Paisley deal… it’s kind of just off the cuff.” Luke said. “That song just really checked off those boxes for me, and it was fun!”

Outrunnin’ Your Memory (feat. Miranda Lambert)
“I’ve always been a big fan of her [Miranda Lambert] songwriting and what she does as an artist I think is just really unique and really, really just great…. To be honest with you, I’m not really sure how this write came together. I don’t remember the exact moment of like, ‘Hey! Let’s write this song together!’ It was never like, ‘Hey, let’s write a song for your album’ or ‘let’s write a song for my album,’ or a duet. We wanted to write a great song and we did. When I went in to cut it I thought, ‘how do we not have her on this thing?’ I asked, and luckily, she said ‘Yes!’”

Used To Wish I Was
All about embracing exactly who he is, this song serves as a great reminder to fans everywhere to be proud of who they are. The chorus sings, “I’m just an North Carolina good ole boy / Boys, I ain’t got no choice / I pick a little guitar in the evenin' / Wear Mossy Oak outta deer season / I couldn’t be anybody but me, even if I tried / I used to wish I was, but I’m glad I’m not.”

Better Back When
“This one was really fun. From a production standpoint, the whole second verse of this song is about going to a [Kenny] Chesney stadium date — which I did a few times in college… this song is just that. Those times were amazing [but] then you have the bridge that says ‘I ain’t sayin’ that right now ain’t right where I want to be.’ Speaks a lot to the Growin Up theme like, you’re in this stage of life and you are content there."

Tomorrow Me
“This was a fun one to write. My buddy Ray [Fulcher] was going through some stuff at the time and we wrote it together with one of our heroes, Dean Dillon, who’s wrote every song that I’ve ever wished I wrote… We wanted to do all the things that make Dean’s songs and sound so special and match it with our thing and luckily we were able to do that.”

Ain’t Far From It
Sticking true to his early ‘90s influences like Garth Brooks, Vince Gill and Clint Black, Luke Combs is serving up nothing but straight up Country vibes with “Ain’t Far From It.” Sure to be turned up to ten in Honky Tonks across the country the chorus sings, “'Bout to light that fuse on a Friday night / Get to cuttin' loose on this wound up tight / Where twenty bucks buys guitars strummin' / Paychecks turn to cold beer buzzin' / All that leads to late night lovin' / We ain't there yet, but we ain't far from it.”

Call Me
“This is a song that I actually had written in 2017 with Jonathan [Singleton] and Shane Minor… This is a song I really feel like could’ve been on What You See Is What You Get or This One’s For You and it just happened to fall right in the middle of those two when it was written… I really just wanted to come back to it.”

Middle of Somewhere
“My buddies would always come out to write [with me] and be like, ‘Man, you live out in the middle of nowhere’ and I would just get to thinkin’ about how much [the town] means to all the people that we’ve met. Our neighbors and the people that work at the little grocery store up the road that’s family owned and all that stuff. That’s really where the idea had come from is just how much a place that everyone else overlooks means to the people that live there.”

Going, Going, Gone
“This album is me kind of coming into this new phase of my life and I think that will affect the music — what it sounds like and what I have to say and I think this song is moving in that direction. I just think this was the perfect thing to end it on. For people to maybe go, ‘I want more of that!’”

Check out Luke Combs’ third studio album, Growin’ Up, available now and be sure to tune into his full behind-the-scenes convo with Katie Neal above!