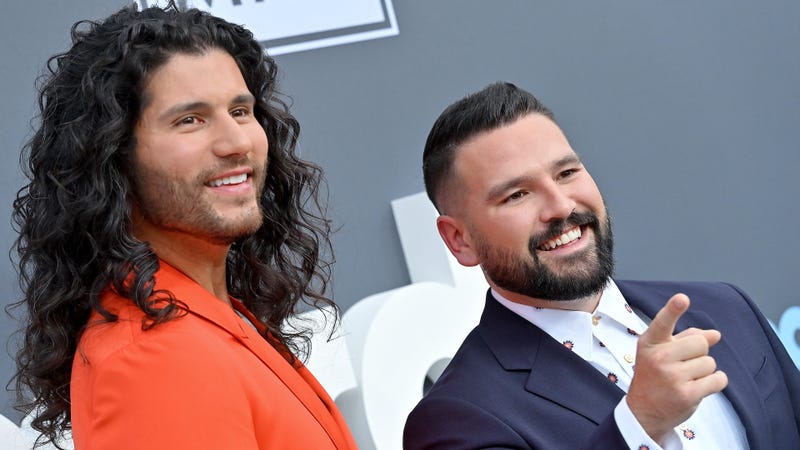 Over the years, Dan + Shay have taken the Country music world by storm with massive hits, out-of-this-world songwriting and vocals, but it isn’t just their talent that drops jaws. Have you seen Dan Smyers hair?!

“It’s stunning, dude,” duo mate Shay Mooney admitted during an interview with Audacy’s Katie Neal. “I look over at it sometimes just to admire it. It smells nice too,” he laughed.

Dan’s long, curly locks are undoubtedly a conversation piece for many loyal fans (and strangers walking down the street). Lucky for all, it sounds like they’ll continue to be as the 34-year-old says he has no plans to cut his hair anytime soon. Here’s why…

“The problem is, we’ve had the majority of our success with the long hair,” he said. “’Tequila’ was our first big moment of our career where we performed on the GRAMMYs, did the whole thing and I kinda had the long hair. So, for the recognizability factor, I can’t cut it now, unless it was like ‘we’re trying to throw it back to the first album' sort of thing.”

Hey, whatever works! We’re happy to see the curly locks continue to flow right along with those #1 hits.

Dan + Shay’s current single, “You,” is the latest to climb the Country radio charts and it’s all thanks to the fans who have been supporting it — many by using it as a first dance song at their wedding.

“There are so many people using this song, ‘You,’ from the new album [Good Things] as their first dance song,” shared Dan. “Having a song in somebody’s wedding, that’s arguably the biggest day of somebody’s life and there are so many songs that somebody could choose from… This song has been a fan favorite and it’s a big one at our shows, let’s take it to Country radio!”

While taking time to enjoy the current single’s climb up the charts, the duo is excited for the future as they share they recently had “one of the biggest writing strides of their career.”

“We’re so excited about what’s to come,” said Dan. “It’s just like, when you find that inspiration, you find that creative flow you just ride that wave as long as you can because it comes and goes.”

He continued, “We gotta get ‘You’ to the top of the chart and then that’ll be our reward to ourselves and to our fans — so much new music!”

Listen to Dan + Shay’s full conversation for more details on new music, touring with Kenny Chesney and more above and don't forget to check out Dan + Shay Radio