In Boston, rookie goaltender Jeremy Swayman was already becoming a fan favorite after a small 10-game sample size in net last regular season in which he impressed fans with a 7-3-0 record and two shutouts. Since they became available, his No. 1 jerseys have been flying off the shelves in the TD Garden ProShop.

The reason lies in Swayman’s already impressive accomplishments in that short time, on top of his poise in net and likable personality.

Maybe even more impressive though is Swayman’s enormous potential. The 22-year-old has already started to make Bruins history.

Last season, he became the fifth goalie in the 97-year history of the Bruins to post two shutouts in his first nine starts. And in the first game of the 2021-22 season, Swayman has already taken the first step towards what could be a historic year for him by doing something no Bruins rookie goaltender has done in 26 years -- start on opening night.

“Going into it I just wanted to treat it like another game, no bigger or smaller than what I've played before. After, now, I do realize the magnitude of it and it was pretty special. Something I’ll never forget,” Swayman said after his first win of the season on Saturday, when he held the Dallas Stars to just one goal in the Bruins’ 3-1 victory.

“Again, I'm so appreciative of these fans and the team in front of me. It was a great game. I think it’s going to be a really fun year.”

The last rookie to start in net for the Bruins on opening night was Blaine Lacher in January of 1995 (yes, a January start to the season because of the lockout). Lacher went on to play just two seasons in the NHL at the ages of 24-25 years old. Swayman, who is the Bruins’ only rookie on the opening day roster, wasn’t even born yet.

Lacher went on to start 35 of 48 games in that lockout-shortened 1994-95 season. This season, Swayman will be splitting time with offseason free-agent signing Linus Ullmark, who has 117 games under his belt in a six-year NHL career.

Though Swayman lacks the experience by comparison, he has always been reaching the highest standards of success along his way to Boston.

In his final season at the University of Maine, Swayman was the 2019-20 Hockey East Player of the Year, the first goalie ever to win that honor. He was second among all Division I goalies with a .939 save percentage that season and won the NCAA’s 2020 Mike Richter Award for the best collegiate goaltender.

He was even a top-three finalist for the 2020 Hobey Baker Award given to the top player in NCAA hockey. He lost out to Scott Perunovich, a St. Louis Blues prospect, who has yet to play an NHL game.

He’s had quite the unlikely story so far in his rapid rise in importance to the Bruins.

His NHL story started when Boston took a shot on Swayman in the fourth round of the 2017 NHL Entry Draft before he’d even played a collegiate game. Swayman was the 12th goalie taken off the board that year and is the only one of them to have started an opening night game for his pro team.

Swayman virtually skipped his stop in the AHL, playing just nine games for the Providence Bruins before being called up to the big club on April 6 last season.

He entered last season fourth on the organizational depth chart and only got his NHL opportunity because of injuries to Tuukka Rask and Jaroslav Halak. Less than a calendar year later, he rose to opening night starter.

Since his draft day, he has matured quickly in both skill and attitude, playing with the poise of an experienced NHLer and handling challenges calmly.

He showed that again when he was able to step back from the opening night jitters by treating the game like any other game, as he said. He also explained his philosophy on not feeling a letdown after a goal and keeping his play consistent.

“Every goal that goes in I typically scan it and forget about it,” he said. “It's just one of those things that when it goes in, you know what you did wrong right away, but you want to focus on the next shot, and I just want to focus on that. I think it helped a lot having a quick memory.”

“I like to just stay in the moment no matter what,” Swayman added. “I think playing whistle to whistle helps me a lot.”

Swayman is already off to a promising start to his career, and with a much larger workload expected for him this season, Bruins fans could see Swayman continue to make the kind of impact few rookie goalies have. 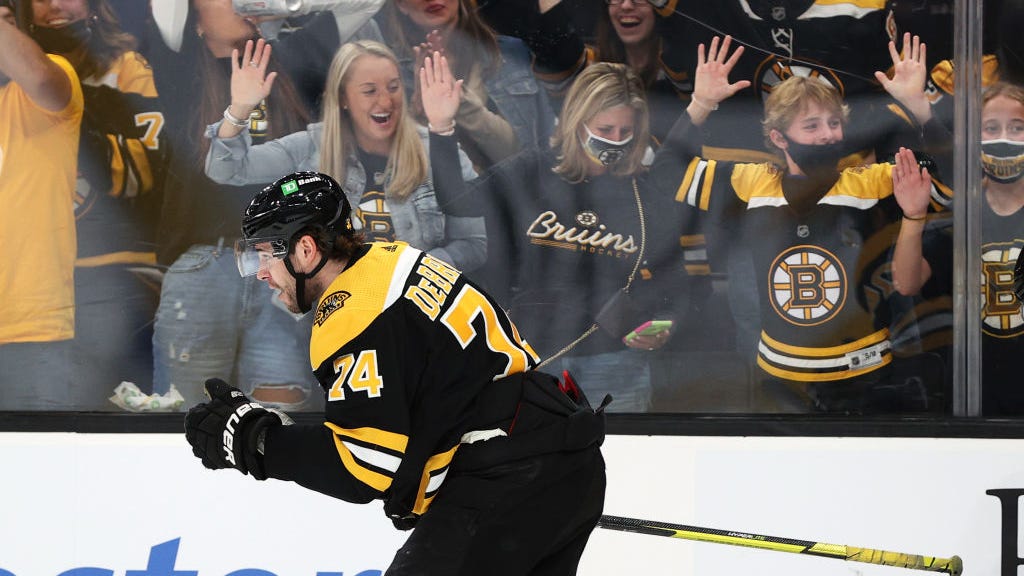