A season that started with Jake DeBrusk as the Bruins' No. 2 left wing ended with him being him a healthy scratch in Game 5 of their second-round playoff series and only getting back in for Game 6 because of an injury.

Needless to say, a lot went wrong in between. Some was out of his control. He missed two weeks early in the season with a lower-body injury, then two more weeks in March after testing positive for COVID-19.

A lot was in DeBrusk's control, though. His offensive production, especially his goal-scoring, dropped dramatically from previous seasons. He ended the season with five goals and nine assists in 41 regular-season games, then two goals and an assist in 10 playoff games.

What made that even more concerning, though, was that his overall game dipped as much as the raw numbers. When Bruce Cassidy made him a healthy scratch twice in the regular season and again in the second round, it wasn't because he wasn't scoring.

Cassidy said more than once that the Bruins needed better effort from DeBrusk and needed him to help them win in other ways even if he wasn't scoring.

In his end-of-season press conference on Friday, DeBrusk reflected on his tough season and discussed what he needs to do going forward.

"I need to revamp some stuff," DeBrusk said. "There were a lot of factors that went into this year, things that I could control and couldn't control. I dealt with a lot of negativity as well. It's one of those things that it's something you have to learn, that you sign up for. I'm a big boy. I can handle that. Just became a little bit of an easy target.

"My haters had a lot to say this year. It's one of those things where, like I said, just have to revamp some things with training and a different mindset. My mindset is in an interesting place right now. Every year it's obviously different, disappointing obviously while hopes were high. I've disappointed myself, and my team. I'm looking forward to this year. I've got to prove a lot of people wrong."

DeBrusk didn't elaborate when asked who he considered his "haters," but said he learned that playing for his teammates and having their support is all that really matters.

"I don't really know, if that makes sense. It just felt like there's a lot [of negativity], one of those things where you just feel it," DeBrusk said. "Not really putting it on anyone, but the one thing I learned is that you obviously play for your teammates and the people in this room. That's all that I really look for now, is just kind of doing it for the guy beside you."

DeBrusk said having a tough season on the ice was made even more difficult by being stuck inside away from the rink and not being able to go out or see family or friends.

"This year was difficult," DeBrusk said. "Obviously learned a lot, how to deal with COVID and all the things that come with it. I feel like everyone in the world can say the same thing. Coming home after road trips and stuff like that, day to day. I mean, isolation is the cute word everyone likes to use. I think I talked about a little bit earlier in the year, to be honest with you. It was difficult. I wasn't able to see my family.

"It was one of those things where it was just hockey all the time. Wasn't that great of a year. Like I said, I learned a lot and how to deal with that. It was just starting to get open and going here, so it was disappointing that we ended around this time. It's exciting and still a positive side to see that life's getting a little bit normal here. I think back home is starting to get going again. It was pretty shut down there, too. Just kind of take it step by step each day and go from there."

The 24-year-old DeBrusk has one year left on his contract, but whether he plays that year in Boston or somewhere else remains to be seen. DeBrusk's name has surfaced in plenty of trade rumors before, and this season only made his future with the Bruins even cloudier.

If the Bruins were to leave DeBrusk unprotected in next month's expansion draft, he would be a prime candidate for the Seattle Kraken to select in the hopes that a change of scenery would help him get back to being the player who scored 27 goals two years ago. But while DeBrusk's value has certainly taken a hit, the Bruins still won't want to lose him for nothing. 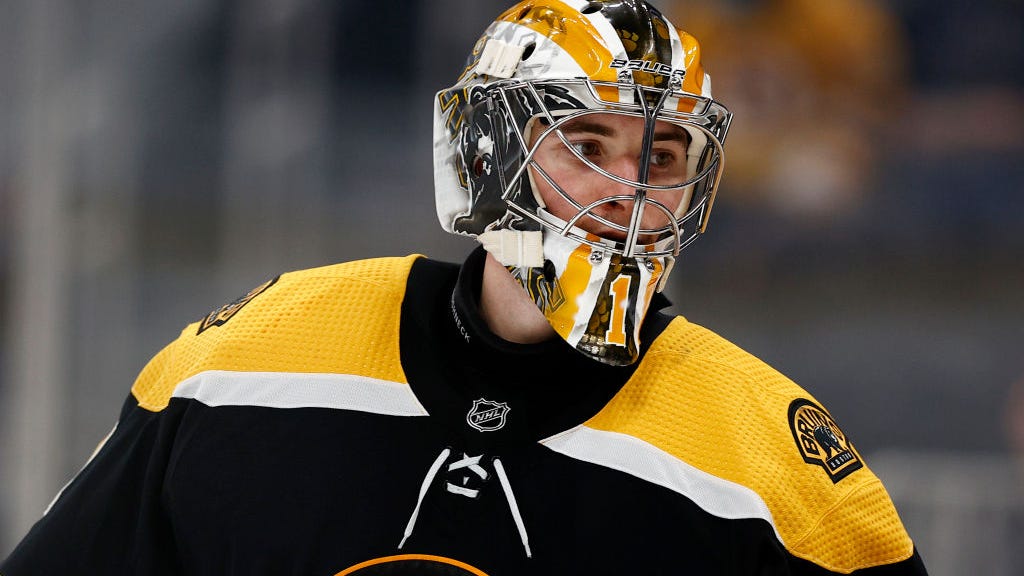 Jeremy Swayman 'addicted' after first NHL playoff experience, wants to be 'back for more'