The Bruins’ seven-game winning streak came to an end with a 5-2 loss to the Florida Panthers Wednesday night. Given that it was just the third loss of the season for Boston, it’s hard to get too worked up over it.

Bruins are hitting their toughest stretch at the right time

If there’s any concern worth highlighting, it would be that the Bruins gave the Panthers seven power plays and surrendered three power-play goals. It was actually the fifth straight game the Bruins have allowed at least one power-play goal, so there is some cleaning-up to do there. But a couple of the calls on Wednesday were pretty soft, the Bruins still have the No. 2 penalty kill on the season, and they have arguably their best killer, Derek Forbort, returning in the next couple weeks. So, it’s not worth panicking over that just yet either.

The most interesting development during Wednesday’s game may have been something Jim Montgomery did that we hadn’t seen yet this season: He pulled his goalie with 11:45 left in the game.

It’s not unheard of -- Patrick Roy famously made a habit of pulling his goalie early when he coached the Avalanche from 2013-16 -- but it’s still pretty rare to see an empty net with that much time left on the clock.

In this case, though, it made a lot of sense. The Bruins were trailing by two goals and had a 4-on-4 situation for 1:25. By pulling Jeremy Swayman, Montgomery turned it into a regular 5-on-4 power play for his team… just with an empty net at the other end.

The Bruins’ power play has been on fire recently. It went 11-for-27 (40.7%) during the seven-game winning streak and the top unit had already scored twice Wednesday night, with Charlie McAvoy and David Pastrnak both blasting rockets past Spencer Knight.

So, if you have an opportunity to create another chance for those guys when you desperately need a goal, why wouldn’t you? The Panthers couldn’t just take free shots at the empty net from their own end, either, because unlike on a regular power play, it would have been icing given that this was technically an even-strength situation. And if the Panthers did end up scoring anyways, then so be it. The Bruins were already down two with only half a period to go; the chances of a comeback were already small.

In this case, the strategy neither paid off nor cost the Bruins. Neither team scored, and when there was a neutral-zone faceoff with the 4-on-4 situation winding down, Montgomery sent Swayman back in. He would remain there until a more conventional goalie pull with 2:10 left in the game.

“I don’t know, honestly,” Brandon Carlo said when asked what he thought of the move. “That’s something that I haven’t really seen before, but I have a lot of faith and trust in him [Montgomery], so whatever decision he wants to make, I’m gonna follow.”

The Bruins obviously haven’t trailed in the third period much this season, so we’ve had few opportunities to see how Montgomery might handle situations like this.

It’s safe to say he’s probably not going to be as aggressive as Roy was when it comes to turning a 5-on-5 situation into a 6-on-5. Very few coaches are.

But if he gets another 4-on-4 situation like this while trailing? As long as he’s still as confident in his power play as he is right now, we would expect to see an aggressive move like this again. 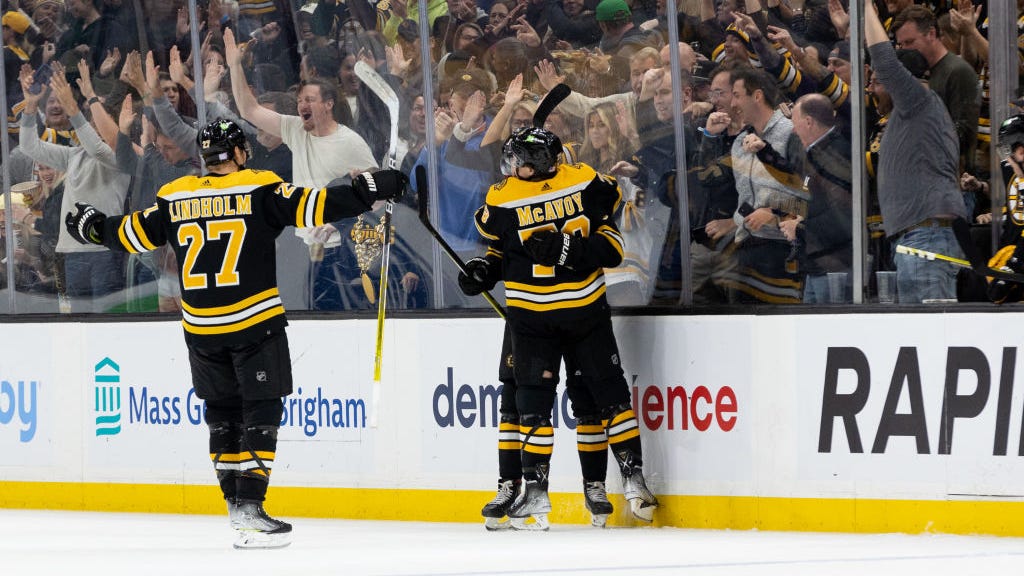 The last time the Bruins started this well, the NHL made one of its most significant rule changes
Featured Image Photo Credit: USA TODAY Sports