After beating the Tampa Bay Lightning 5-3 on Monday, the Bruins are now a ridiculous 17-2-0 on the season.

You won’t find a start that good any time in their modern history. In fact, you have to go back more than 90 years, to the 1929-30 season, to find one.

Led by legendary general manager and coach Art Ross, superstar defenseman Eddie Shore, and the “Dynamite Line” of Cooney Weiland, Dit Clapper and Dutch Gainor, those Bruins got off to a 19-2-0 start en route to a 38-5-1 regular season. They still hold the NHL record for best single-season winning percentage.

The Bruins entered that season as the defending Stanley Cup champions, but they took their dominance to new levels in 1929-30, thanks in part to a major new rule change that they mastered better than anyone.

To combat record low scoring in 1928-29 (it is still the lowest-scoring season in NHL history), the league allowed forward passing in the offensive zone -- it had previously only been allowed in the defensive and neutral zones -- for the first time.

There was no offsides rule, though, so teams began to play a style that would seem comical to us today: They would have one forward hang out in the offensive zone, generally right in front of the goalie, at pretty much all times. Teams would carry the puck over the blue line and immediately look for the cherry-picker.

Scoring skyrocketed, nearly tripling in the first month of the season. The Bruins as a team, and Weiland in particular, mastered the art. “Total Hockey: The Official Encyclopedia of the National Hockey League” names Weiland and the Montreal Maroons’ Nels Stewart as two players who “employed this tactic to pile up goals.”

“For the first half of that year, Cooney Weiland was sort of camped in front of the opposing net,” said Richard Johnson, curator of The Sports Museum and author of an upcoming Bruins centennial history. “Imagine Sean Avery when he used to do that. Cooney Weiland would be there just waiting for the puck to be fed to him, and he was apparently the master of the tip-in. … For that season, he was remarkably adept at converting passes into goals, and the rule change really helped him quite a bit that year.”

The league decided that wasn’t the game they wanted and made another major rule change mid-season. Beginning in late December, just a third of the way into the season, players were no longer allowed to enter the offensive zone before the puck, giving birth to the modern offsides rule as we know it.

Johnson believes that the Bruins’ and Weiland’s dominance was a key factor in the expedited mid-season adjustment.

“I’m sure it was,” Johnson said. “I imagine the teams in Canada were probably a little bit sick of seeing their American cousins stomping all over them. I mean, when you have a team that goes undefeated for the month of December, I’m sure there were heads being scratched and conversations being held in terms of, ‘OK, we have to do something about this.’”

If slowing down the Bruins was one of the goals, it didn’t really work. They kept winning, they still scored nearly a goal per game more than any other team (and twice as many goals as they had scored the previous year), and Weiland (who would later coach at Harvard for 21 years) still set a new scoring record with 73 points, shattering Howie Morenz’s previous record of 51.

The Bruins were the biggest draw in the league, with Shore considered a marvel due to his combination of endurance (Johnson said he would often play 40-plus minutes per game), physicality and a then-unique ability to lead rushes as a defenseman. According to Johnson, the Boston Garden was typically 1,000 fans over its then-13,909 capacity for games, and some accounts of the 1930 Stanley Cup Final claim there were 16,000 people in the building for Game 1.

In what would become too common of a theme in Bruins history, the record-setting 1929-30 season ended in disappointment at the hands of the Montreal Canadiens, who upset Boston two games to none in a best-of-three Stanley Cup Final. That shocking result would lead to yet another change, as the NHL expanded the Final to a best-of-five series the following year.

The 2022-23 Bruins probably won’t keep pace with the 1929-30 Bruins’ ridiculous .875 winning percentage all season, but there also probably won’t be any mid-season rule changes to try to slow them down.

Regardless, this gives you an idea of the kind of company this year’s Bruins are in so far. And their ultimate goal will be to do something that 1929-30 team didn’t: Win the Cup. 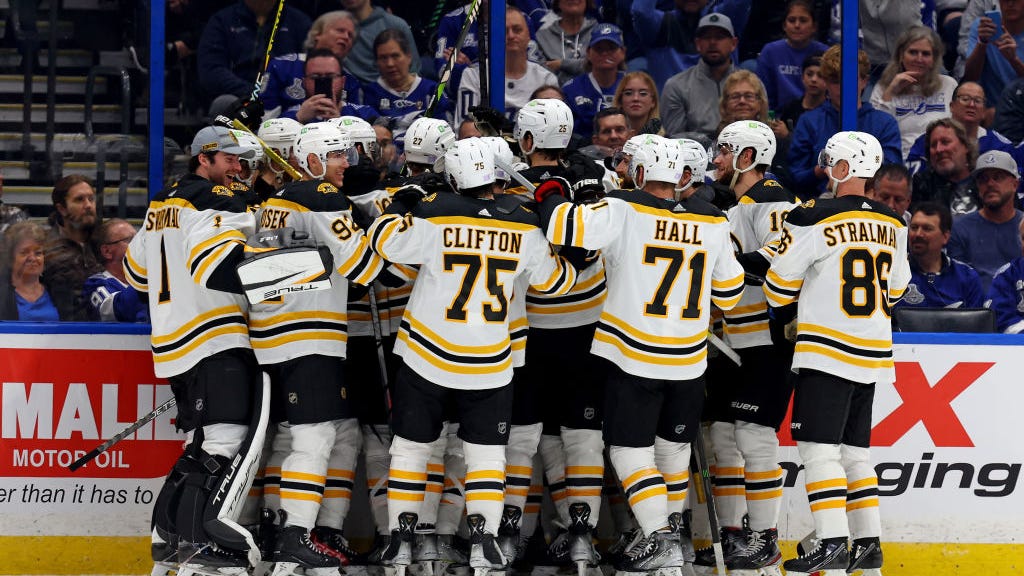