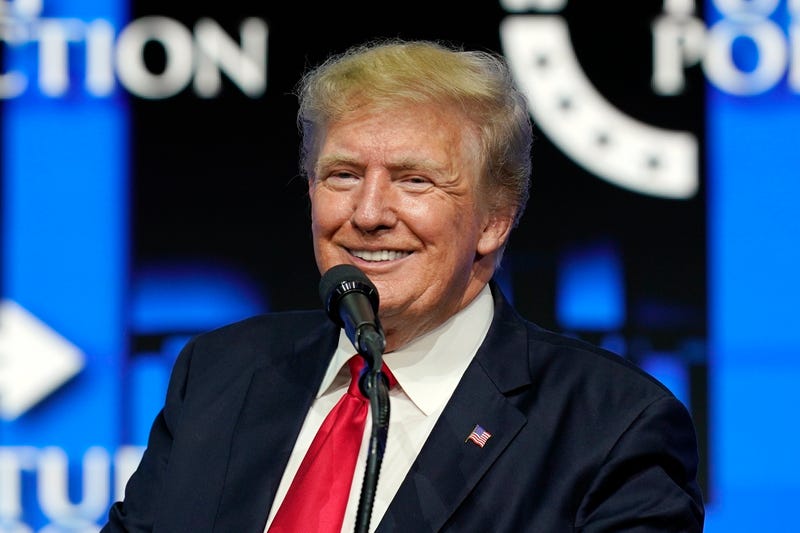 Digital World Acquisition Corp. nearly tripled in the first minute of trading before it was temporarily halted. It then gave up a chunk of those gains, but it still ended the day with a 107% gain to $94.20. In the morning, it climbed as high as $175.

A day before, the stock more than quadrupled to $45.50 from $9.96 after it said it would merge with Trump Media & Technology Group. The new venture, with Trump as its chairman, aims to challenge Facebook, Twitter and even Disney’s streaming video service.

Experts are mixed on the company’s prospects, and the deal announcing its merger with Digital World Acquisition was unusual in how few details it offered investors. The company was incorporated in February but has yet to publish an app, offer details about its financials or say how much it plans to charge for its on-demand streaming and other services. All of that could give investors pause, but not by enough to keep Digital World Acquisition Corp.'s stock from soaring.

Some investors appear to be believers in Trump's ideology, while others see a chance for the company to quickly gain a big audience. A big chunk of investors, though, appeared simply to be grabbing for a chance at a quick profit.

Several threads on Reddit's WallStreetBets forum, where millions of traders share their successes and failures, had users bragging about how much money they made by jumping in and out of Digital World Acquisition Corp. Others were asking if they should listen to the fear they were feeling of missing out. WallStreetBets gained fame early this year after its members helped drive GameStop and other formerly downtrodden stocks to extreme heights, levels that professional investors saw as dangerously untethered to reality.

Trading in Digital World Acquisition Corp.'s stock was so furious, and swings in its price were so sharp, that it was temporarily halted a dozen times on Friday.

Digital World Acquisition is a special-purpose acquisition company, something that's typically called a SPAC or “blank-check” company. It's sitting on a little less than $300 million of cash that it raised in its own initial public offering, before it went looking for a company to acquire.

SPACs can offer privately held companies a quicker and easier way to get their stocks on an exchange, by merging with them. They were wildly popular earlier this year, but activity had been receding as regulatory scrutiny on them and interest in them dimmed, at least until Wednesday's Trump-related announcement.