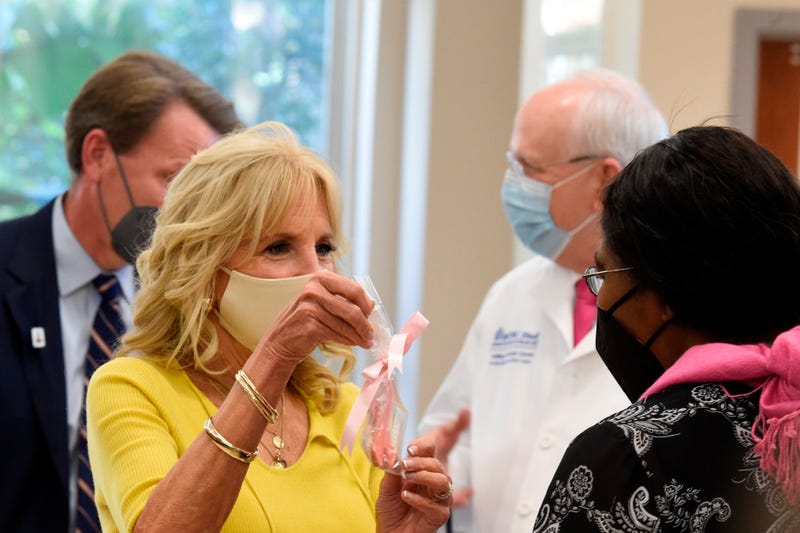 CHARLESTON, S.C. (AP) — First lady Jill Biden on Monday toured a cancer center in the state that played a pivotal role in her husband's victory in the 2020 Democratic nominating process, telling South Carolinians that cancer “touches every American family.”

In the closing days of October — a month dedicated to breast cancer awareness — the first lady said she was making the trip as part of a continued commitment to pushing for research efforts toward a cure.

One of the women Biden spoke with was LaToya Wilson, a mother of two and a Stage 4 breast cancer patient who said she was 37 when she was first diagnosed.

“We need more minorities as part of these trials,” Wilson, who is Black, told Biden, crediting her survival to participation in clinical trials.

“Too many women, particularly Black women, are living with breast cancer,” Biden replied.

Biden, 70, has been vocal about the role that cancer has played in her life, most directly in the death of her son Beau from brain cancer at age 46. That loss also factored into her trip to South Carolina just over a week ago, when she attended events at Brookland Baptist Church in West Columbia, where she said a relationship with the pastor’s wife helped her reclaim her faith following Beau’s death.

The first lady met with breast cancer survivors, researchers and mammography specialists at the Hollings Cancer Center, named for the late U.S. Sen. Fritz Hollings. The longtime South Carolina Democrat was President Joe Biden's Capitol Hill deskmate during their decades together in the Senate, and Jill Biden said both the senator and his late wife, Peatsy, “were very special to us.”

Later, Jill Biden stopped at Joint Base Charleston, a facility that houses pilots and crews that participated in last summer's airlift of more than 120,000 Americans, Afghans and other allies from Kabul at the end of the U.S.'s 20-year war in Afghanistan. During brief remarks, Biden said crews from the base "distinguished themselves in the execution of one of the largest humanitarian airlifts ever conducted."

President Biden has defended the decision to end America’s longest war and withdraw all troops ahead of the Aug. 31 deadline, despite spasms of violence, including a suicide bombing that killed 13 American service members and 169 Afghans.

The first lady's multiple recent South Carolina visits have showcased the administration's appreciation for the state. The first balloting in the South, with the first heavily Black electorate for Democratic candidates, South Carolina was the scene of Joe Biden's political resurrection, following lackluster performances in earlier contests in 2020.

Days ahead of the primary, Biden won the endorsement of longtime ally U.S. House Majority Whip Jim Clyburn, the highest-ranking Black member of Congress and the dean of South Carolina’s Democrats.