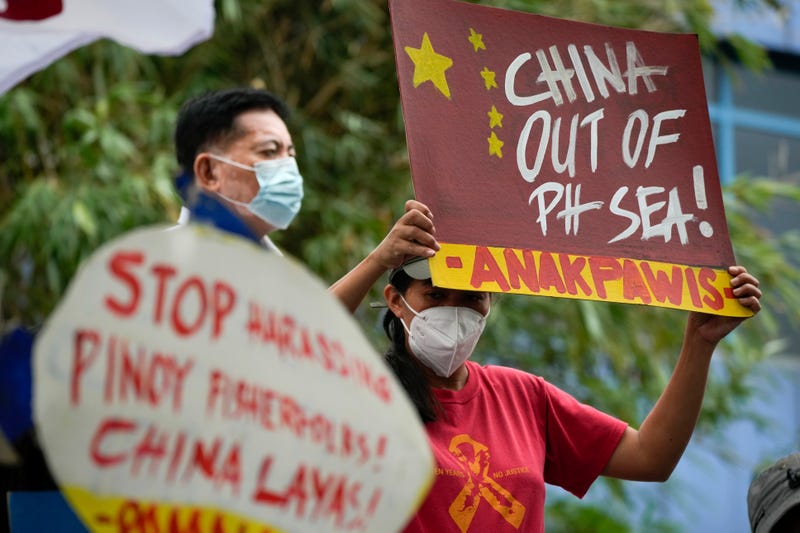 Philippine forces use a grounded warship, the BRP Sierra Madre, as an outpost on the submerged but strategic shoal that is at the center of an ongoing dispute with China.

Defense Secretary Delfin Lorenzana said the Second Thomas Shoal lies within the exclusive economic zone of the Philippines under the 1982 U.N. Convention on the Law of the Sea, which China has ratified. He said a 2016 ruling by a U.N.-backed arbitration tribunal also invalidated China’s claims to the busy waterway, leaving them without any legal basis.

China’s Ministry of Foreign Affairs asked the Philippines Wednesday to “honor its commitment" and remove its grounded vessel on Ren’ai Jiao, the name Beijing uses for the shoal, which Filipinos refer to as Ayungin. Chinese coast guard ships have allowed Manila's boats to bring food and other supplies to Filipino forces at the shoal for humanitarian reasons, it said.

But defense chief Lorenzana told reporters he was not aware of any Philippine government commitment to remove its navy ship, which has been grounded upon the shoal since 1999.

“We can do whatever we want there and it is they who are actually trespassing," he said.

Following the Chinese blockade, the United States said it was standing by the Philippines and reiterated that an armed attack on Philippine public vessels in the South China Sea would invoke U.S. mutual defense commitments under the two allies’ 1951 Mutual Defense Treaty.

The Philippine navy successfully transported supplies and fresh personnel to the Sierra Madre this week then left without any major incident after Lorenzana talked with China's ambassador to Manila. President Rodrigo Duterte, who has nurtured close ties with Beijing, angrily condemned the Chinese blockade in a video summit of Southeast Asian leaders with Chinese President Xi Jingping. Xi did not specifically react to Duterte’s remarks but said China will not bully its smaller neighbors.

It was the latest flareup of long-simmering disputes in one of the world’s busiest waterways, where China, the Philippines, Vietnam, Malaysia, Brunei and Taiwan have overlapping claims.