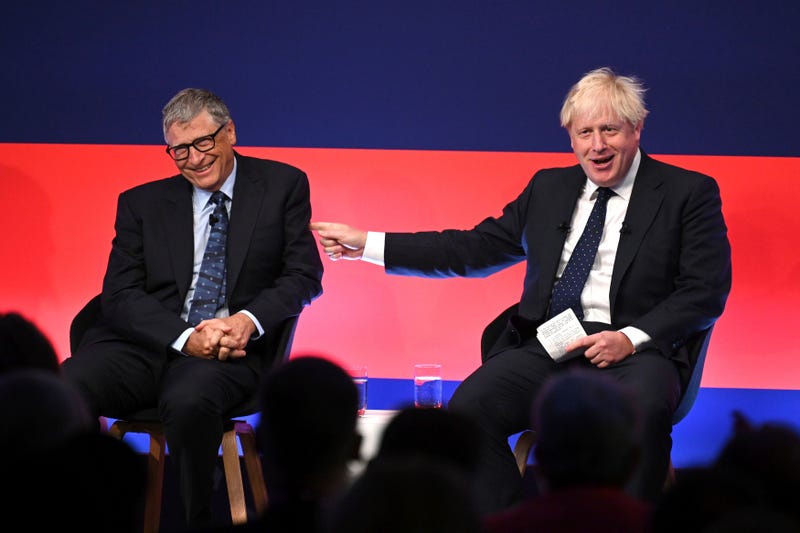 LONDON (AP) — The United Kingdom announced plans Tuesday to stop installing home heating that uses fossil fuels by 2035 as the government hosted a meeting aimed at attracting billions of dollars in foreign investment for green projects in Britain.

“I can deploy billions,” Johnson told a room full of CEOs and other business leaders. “But you in this room, you can deploy trillions.”

“The market is going green,” he added.

Among pledges from the one-day meeting at London’s Science Museum was a partnership with Bill Gates’ Breakthrough Energy Catalyst to drive 200 million pounds ($275 million) of private sector investment in green power programs in the U.K., matching the same amount from the government.

The money will finance development in the U.K. of four key green tech areas: green hydrogen, long-term storage for renewable but intermittent energy sources like wind and solar, sustainable aviation fuels and directly capturing carbon dioxide from the air.

The former Microsoft CEO said those technologies are uneconomical now but pouring money into their development would help drive innovation to make them affordable.

“We will scale those up and bring down that cost, so we’ll get these to the same place we are today with solar and onshore wind and so they can be scaled up to reduce emissions," Gates said in a discussion with Johnson on the summit stage.

Gates wasn't the only billionaire making big sustainable funding pledges Tuesday. The philanthropic organization of former New York Mayor Michael Bloomberg, who's a U.N. special climate envoy, and the International Solar Alliance said they're teaming up to work on the goal of mobilizing $1 trillion in investments for solar power in the alliance’s 80 member countries.

Johnson is set to host world leaders in Glasgow, Scotland, at the end of the month for a U.N. climate summit. Known as COP26, the meeting is widely seen as the last chance to hold global warming to 1.5 degrees Celsius above pre-industrial levels.

He said Britain has a responsibility to lead the world in decarbonizing because it was the birthplace of the industrial revolution. Wealthy countries must help poorer nations cut their carbon emissions by financing green technology, the prime minister said.

“We, in the U.K., have been pumping this stuff into the air for 200 years," Johnson said. “Those countries haven’t, and they’re going to need help to reduce their CO2 output, and the only way that help can be given in the volume required is massive private sector investment."

He also said Britain would phase out home heating with fossil fuels by 2035 as part of its goal of reaching net zero carbon emissions by 2050.

The government said Tuesday that no new gas boilers will be installed after 2035, and from next year, households will be able to get grants of 5,000 pounds ($7,000) to replace gas boilers with low-carbon heat pumps.