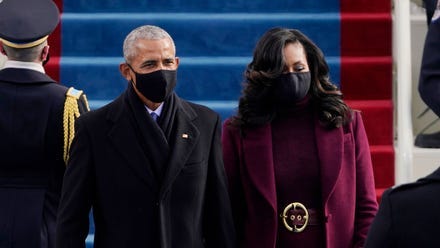 WAUKEGAN, Ill. (WBBM NEWSRADIO) — As the Waukegan Community Unit School District No. 60 board considers a new name for Thomas Jefferson Middle School, some residents of the Latino-majority city do not want to see it named for former President Barack Obama.

Obama and his wife, Michelle, the country’s first Black president and first lady, are on the list of potential new names for the middle school.

Despite the Obamas' ties to Chicagoland, some Waukegan residents are concerned with naming a school in the mostly-Latino city after a president with the former president's immigration deportation track record.

They called Obama the deporter-in-chief and among those speaking during a school board meeting, Oscar Arias said the Obama administration was hostile to the immigrant community and the impact was widely felt in Waukegan.

“That’s millions of families that were affected and separated, many of whom reside right here in Waukegan. The fear that many of friends faced of never seeing their parents again after coming home from school still resonates with me,” Arias said.

He said renaming the school for Barack and Michelle Obama would be harmful and exclusionary.

Another opponent, Julie Contreras, who works with the immigrant community, said hundreds of local families were impacted by immigration raids.