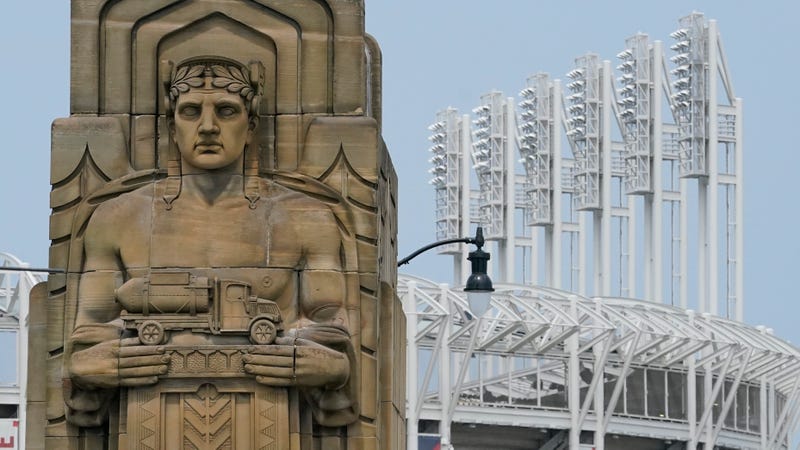 CLEVELAND (AP) — While riding his bike over a bridge across the Cuyahoga River near Progressive Field, Indians owner Paul Dolan rarely paid much attention to the eight giant stone figures that seem to guard the city.

They have new meaning,

After more than 100 years, Cleveland's Major League Baseball team is getting a new name — Guardians.

The Indians are going, going, soon to be gone.

The ballclub announced Friday that at the end of the 2021 season, the Indians will transition from the name they've been known as since 1915 and replace it with Guardians, one they hope inspires a new generation of fans.

The name change, which has its supporters and critics among Cleveland's fan base, ends months of internal discussions triggered by a national reckoning for institutions and teams to drop logos and names considered racist.

“We do feel like we’re doing the right thing and that’s what’s driving this,” Dolan said following a news conference at the ballpark. "I know some people disagree, but if anything I’ve gotten more and more comfortable that we’re headed in the right direction.

“And actually, the selection of the name solidifies that feeling because of the values that the name represents."

The organization spent most of the past year whittling down a list of potential names that was at nearly 1,200. It was a tedious process, which included 140 hours of interviews with fans, community leaders, front office personnel and a survey of 40,000 fans.

Dolan has said last summer’s social unrest, touched off by the killing of George Floyd in Minneapolis, spurred his intention to change the name — a move that came a few years after the Indians stopped wearing the Chief Wahoo logo on their game jerseys and caps.

Cleveland’s new name was inspired by the large landmark stone edifices — referred to as traffic guardians — that flank both ends of the Hope Memorial Bridge, which connects downtown to Ohio City.

As the team moved closer to making a final decision on the name, Dolan said he found himself looking closely at the huge art deco sculptures.

“Frankly, I hadn’t studied them that closely until we started talking about them and I should emphasize, we’re not named after the bridge, but there’s no question that it’s a strong nod to those and what they mean to the community,” he said.

The team did not reveal the names of any of the other finalists, but Brian Barren, Cleveland's president of business operations, said trademarking issues eliminated several potential candidates.

In the end, the team felt Guardians was a perfect fit.

“We think Guardians is unique and authentic to Cleveland,” Barren said. "It’s less about the Guardians of Traffic and more about what the Guardians represent and that idea of protection. For us and our research, Cleveland folks are very protective of one another.