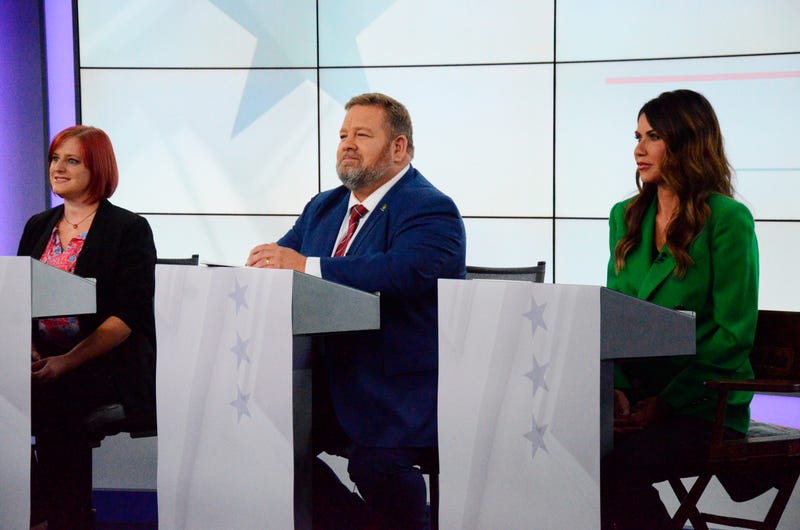 SIOUX FALLS, S.D. (AP) — South Dakota Gov. Kristi Noem indicated Friday during her reelection campaign's lone debate with her Democratic challenger, state lawmaker Jamie Smith, that if reelected she will uphold the state's abortion ban that provides no exceptions for rape or incest.

The Republican governor explained her position simply as “pro-life,” while pledging to push for expanded parental leave in the state and alleviate the toll of inflation on people's budgets. Smith called Noem's stance extreme and said it was endangering women's lives and causing concern among physicians for its lack of clarity on when an abortion is allowed — only to save the life of a pregnant woman.

“It's clear to me that South Dakotans overwhelmingly support a woman’s right to an abortion,” Smith said. “We talk about freedom all the time, except the freedom to make this choice.”

The gubernatorial race's lone head-to-head meeting of the two candidates featured Noem touting her record of a hands-off approach to the COVID-19 pandemic. Smith, who is facing an uphill election in the heavily Republican state, cast himself as a moderate. Here are the key takeaways from the Friday night clash that was hosted by KSFY-TV:

Noem claimed the state has the “strongest economy” in the nation, crediting her decision to forgo government restrictions during the pandemic. But she also turned attention to the squeeze that inflation is putting on household budgets. She said she hears from many people who are “struggling because they can’t pay their grocery bill. They’re struggling because they can’t pay gas prices.”

Earlier this week, she promised to push for repeal of the state’s 4.5% tax on food sales.

But Smith was quick to point out that was an initiative he has been pushing for years, and when the House passed the proposal in March, support from Noem was lacking. Noem publicly opposed the proposal after the state Senate dismissed it in March, but she said Friday that it was an idea she supported and her office had been working on it.

Recently, South Dakota’s economic growth has lagged behind the rest of the country. Last year, it had the 15th lowest growth in gross domestic product — the broadest measure of economic output — among states. However, South Dakota has seen one of the nation’s highest rates of growth in personal income in recent years.

The Republican governor deflected questions on a pair of ethics investigations against her by blaming the state's former attorney general, Republican Jason Ravnsborg, for filing the complaints to the state's Government Accountability Board. She pointed out that she had pressed Ravnsborg to resign after he struck and killed a pedestrian with his car in 2020 and suggested the complaints were just an attempt to get retribution.

A state ethics board in August acted on the complaints against Noem. She was accused of misconduct for interfering in a state agency as it was preparing to deny her daughter a real estate appraiser license, as well as misusing the state airplane by traveling to events hosted by political organizations.

“This matter is closed and it is something that is very clear my daughter never once received special treatment,” Noem said, adding that she had followed the law and precedent in her use of the state plane.

However, the Government Accountability Board's three retired judges voted unanimously last month to find that there was evidence that the governor engaged in a conflict of interest and committed malfeasance in the episode with her daughter’s licensure, but it also kept the board’s action on the complaint a secret. The board also requested that the state’s Division of Criminal Investigation examine her use of the state airplane.

Smith took the opportunity to swipe at Noem: “South Dakotans, you can tell the difference between right and wrong."

But it was Noem who mostly prodded Smith. She repeatedly tried to tie him to President Joe Biden and called him “extreme.”

Smith touted his work as a teacher and coach and sought to criticize Noem for leaning on the work of a conservative college in Michigan, Hillsdale College, to remake the state's social studies standards.

Noem in turn said she was working to elevate parents' voices in education and accused Smith of being a proponent of so-called critical race theory — an academic framework that examines American history through the lens of racism. He said that is not a problem in South Dakota's schools.

Noem had declined an invitation to a debate hosted by South Dakota Public Broadcasting, but Smith challenged her to meet him again.

If she doesn't, the public broadcaster has said it plans to host a debate just with Smith and Libertarian candidate Tracey Quint, who also joined the Friday debate.