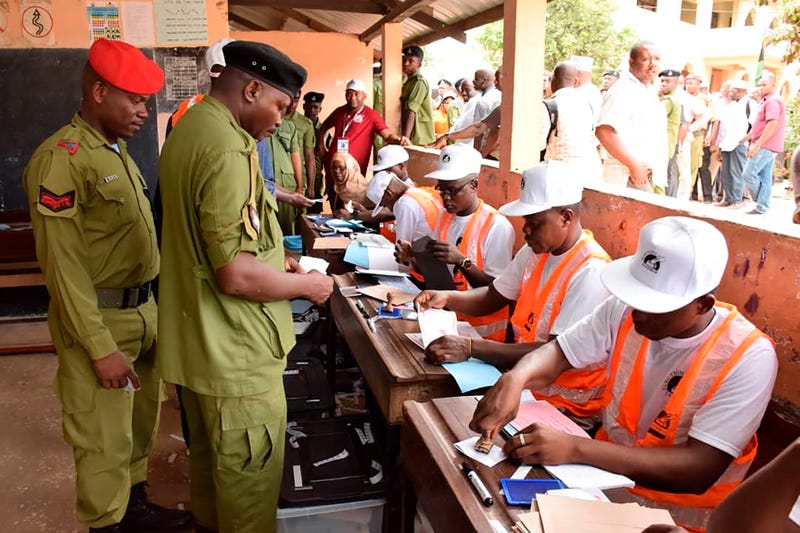 ZANZIBAR, Tanzania (AP) — Police in Tanzania shot dead at least nine citizens amid unrest over alleged fraud ahead of the presidential election, a major opposition party asserted Tuesday, while officials denied it and one of Africa's most populous countries watched internet service slow to a crawl ahead of Wednesday's vote.

The other main opposition party accused ruling party officials of shooting two people dead at a campaign rally elsewhere in the country once praised for its peace but now a growing human rights crisis under populist President John Magufuli, who seeks a second five-year term.

In the semi-autonomous island region of Zanzibar, the ACT Wazalendo party accused police of opening fire Monday night after residents suspected soldiers of distributing pre-marked ballots to polling stations designated for advance voting and tried to stop them. Ten other people were seriously wounded, the party said.

The ACT Wazalendo presidential candidate in Zanzibar, Maalim Seif Sharif Hamad, was arrested Tuesday morning at a polling station as he went to vote, the party said, and police confirmed it. He later was released.

“I think it is going to be a very terrible situation,” Pavu Juma Abdalla, ACT Wazalendo’s deputy secretary for human rights, told The Associated Press. She said more than 100 people were arrested.

There was a heavy police and military presence in Zanzibar on Tuesday, with police using tear gas on citizens who defied an order to remain at home.

“The bodies and injured have been rushed to the district hospital,” local member of parliament John Heche told the AP. “Their plan was to make sure we don’t survive the election.”

He said police saw the shooting and did nothing. Police didn't comment, and the ruling party wasn't responding to phone calls.

CHADEMA's presidential candidate, Tundu Lissu, condemned the killings and urged people to “go into the street and demand for justice” if the National Electoral Commission announces election results on Thursday, the day after the vote, before ballots are properly counted.

“I'm alarmed by reports from Zanzibar and elsewhere of violence, deaths and detentions,” the U.S. ambassador to Tanzania, Donald J. Wright, said in a statement. “It's not too late to prevent more bloodshed! Security forces must show restraint."

The United Nations human rights office said it was “particularly alarmed” by reports of the shootings in Zanzibar. “We have been following with concern the shrinking of democratic space in the country, with worrying reports of intimidation, harassment, arbitrary arrests and physical attacks against political opponents,” spokeswoman Ravina Shamdasani said.

Opposition parties and human rights groups have expressed concern that the vote is already compromised in favor of the ruling party.

The president, Magufuli, in his final campaign speech didn't address the shootings but called for a peaceful vote. He has campaigned on promises of improving the pay of civil servants who haven't received a raise since he took power.

Magufuli after winning the 2015 election barred opposition political parties from holding most public gatherings. Some major independent election observers will be absent on Wednesday, unlike in previous votes.

“We would like to remind you that the long-term peace and stability of Tanzania as well as the region rests on your commitment and diligence in conducting a credible, impartial, fair and transparent process,” the Tanzania Elections Watch, a regional group of eminent persons, wrote to the national electoral commission.

So far, the group said, the commission's conduct “does not pass the basic tests of an independent and impartial election management body,” adding that “many candidates remain locked out of the process.”

Amnesty International's Seif Magango added in an interview: “We are concerned that the last five years of human rights deterioration in the country could continue into the next five.”

Zanzibar has been the scene of deadly abuses by security forces in the past. In 2001, security forces killed at least 35 people and wounded more than 600 while suppressing opposition protests over alleged election fraud, Human Rights Watch reported.