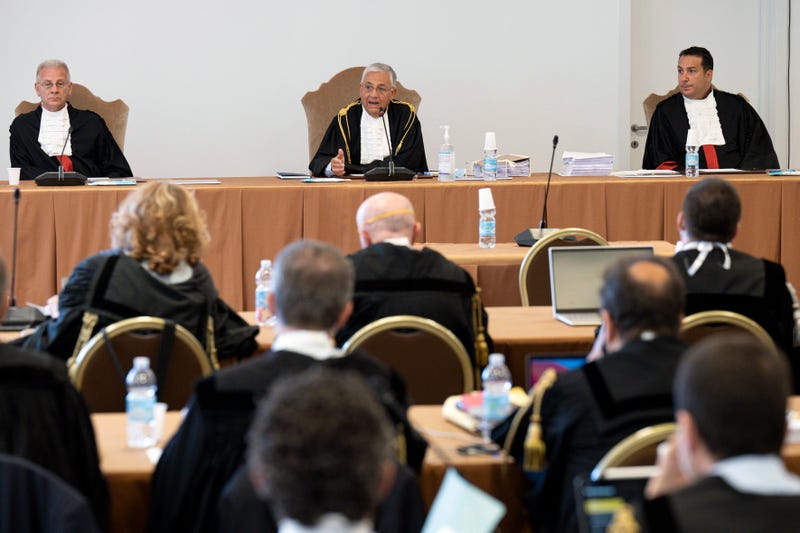 VATICAN CITY (AP) — A fraud and embezzlement trial over alleged mismanagement of the Holy See’s investments began Tuesday in Vatican City, with a once-powerful cardinal among the 10 defendants saying he remains “obedient” to Pope Francis, who stripped his privileges to bring him before the tribunal.

’’He wanted me to be on trial, and I’m coming to the trial. I’m serene. I feel tranquil in my conscience,″ Cardinal Angelo Becciu, one of two defendants who attended the largely procedural, seven-hour session, told reporters afterward.

Becciu, a former longtime Vatican diplomat, is charged with embezzlement, abusing his office and with pressing a monsignor to recant information he gave to prosecutors about the handling of disastrous real estate deal involving properties in London.

The 73-year-old prelate, who was elevated to cardinal by Francis in 2018 but later dismissed by the pope from his later post in charge of the church's saint-making office, has denied any wrongdoing.

During the first day of the trial, defense lawyers lamented they hadn't had time to digest about 28,000 pages of documents recently released by Vatican prosecutors. They noted that much of the evidence from the July 3 indictments hadn't been made available to them, apparently due to logistical problems.

The Vatican, an independent city state, has a tiny courtroom, as well as its own jail. But to accommodate all the defendants, lawyers and journalists for what is the largest trial in the Holy See's modern history, the case was moved to a hall that is part of the Vatican Museums.

The makeshift courtroom is adorned only with a crucifix, and, just behind where the three-member prosecution team sits, a photo of Francis in his white robes.

Not waiting for a verdict, Francis has already removed Becciu's rights as a cardinal. So Becciu showed up in court wearing a plain black clergyman's suit and a large, pectoral cross instead of the prestigious red garb reserved for the so-called ‘’princes of the church.''

Asked by a reporter why he showed up for his day in court while most of his fellow defendants did not, Becciu said: “It's important to be here.”

Also in court was Monsignor Mauro Carlino, who is charged with embez