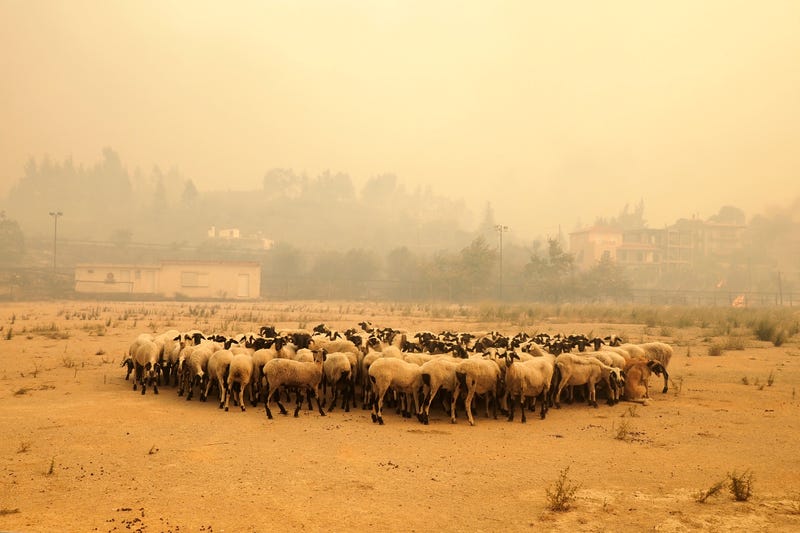 VARIBOBI, Greece (AP) — Greece evacuated people in boats from an island beach Wednesday amid heavy smoke from a nearby wildfire and fire crews fought to keep flames away from the birthplace of the ancient Olympic Games as the country sweltered under a record heat wave.

With over 100 wildfires burning in Greece, the European Union sent assistance to it and other southeast European countries grappling with huge wildfires. The help came a day after another major blaze burned more than 100 homes and businesses near the Greek capital of Athens.

Civil Protection chief Nikos Hardalias said 118 wildfires broke out over the past 24 hours, and warned that even worse days could lie ahead for the hard-pressed fire service.

“We are making a titanic effort on many fronts,” he told an evening briefing. “According to our threat forecasts, tomorrow too is expected to be a difficult day ... The toughest part lies ahead of us, the next days and weeks will be even harder. Our key target is to protect human lives.”

Evacuations were taking place in Greece's southern Peloponnese region due to a major fire near ancient Olympia — where the Olympics were held every four years from 776 B.C. for more than a millennium. The adjacent town of Ancient Olympia was evacuated, with another seven nearby villages. The area was ravaged by wildfires in 2007 that cost dozens of lives but spared Olympia's ruined sports venues and te