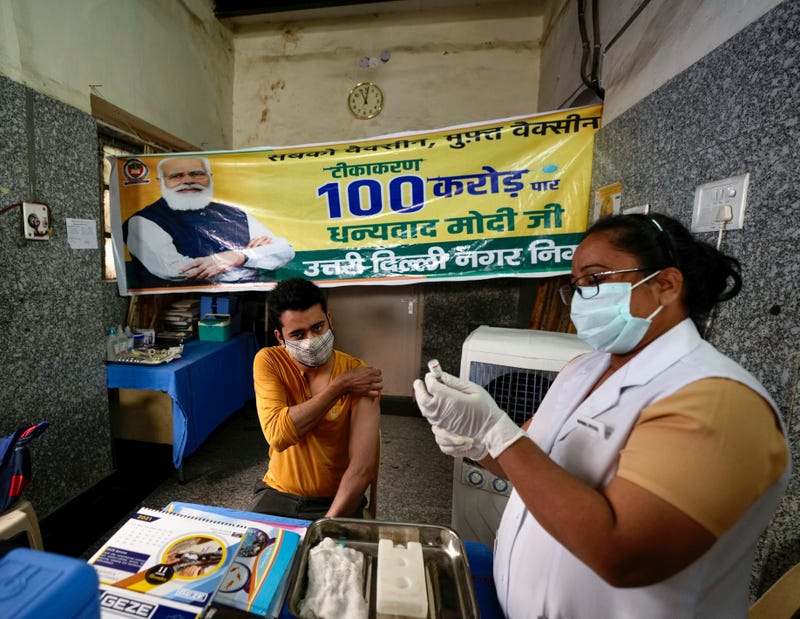 NEW DELHI (AP) — India celebrated giving its billionth COVID-19 vaccine dose on Thursday, a hopeful milestone for the South Asian country where the delta variant fueled a crushing surge earlier this year and missteps initially held back its inoculation campaign.

About half of India's nearly 1.4 billion people have received at least one dose while around 20% are fully immunized, according to Our World in Data. Many of those shots have come in just the past couple of months, after the rollout languished in the first half of the year amid vaccine shortages and problems with the system for rolling them out.

The success of the campaign has been credited with driving down coronavirus cases since the devastating months at the start of the year when India was recording hundreds of thousands infections a day, hospitals buckled under the pressure, and crematoriums and graveyards became overwhelmed. But experts warn that India must speed up the delivery of second shots in order to ensure the outbreak doesn't flare again.

The country widened the gap between shots from 12 to 16 weeks in order to administer more first doses at a time when supply was limited and infections were surging — a tactic countries like the United Kingdom have used in times of crisis. But it created a lag in getting people fully immunized.

India is using vaccines that require two doses. Ramping up the second dose is “an important priority,” V.K. Paul, the head of the country’s COVID-19 taskforce, said last week.

“We would like to see this number go up. Complete coverage is absolutely critical,” Paul said.

For now, the country appears to have enough vaccines to do that — but its supplies will be watched closely since it is a major supplier of the shots globally. When it halted exports in April as cases surged at home, it had a devastating impact on poorer countries that particularly rely on doses from India. Exports resumed earlier this month.

The government is now optimistic that the country’s rising vaccine supply will be enough to cover its international and domestic commitments. Both of the two main suppliers have ramped up production, with the Serum Institute of India now producing around 220 million doses a month and Bharat Biotech about 30 million, Paul s