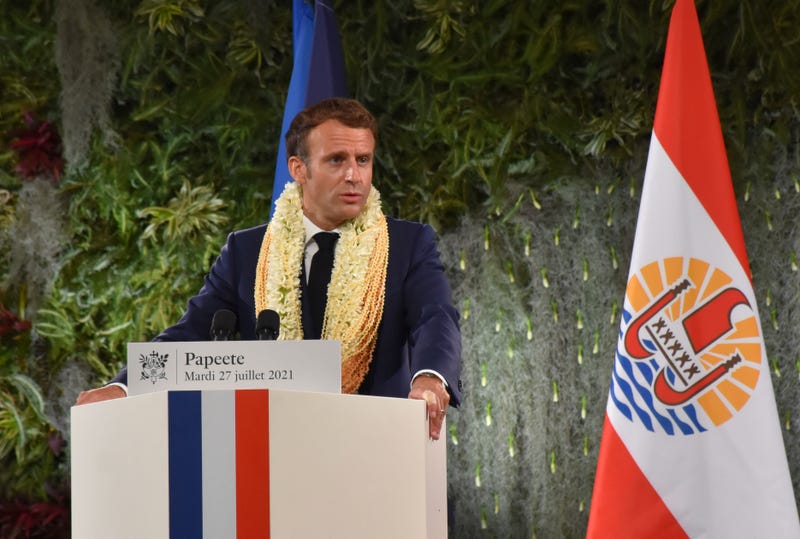 PAPEETE, French Polynesia (AP) — French President Emmanuel Macron has reasserted his nation's presence in the Pacific on a visit to French Polynesia, a trip aimed at countering growing Chinese dominance in the region.

The trip was also designed to underline the French government's support for Polynesians and heal wounds over French nuclear testing on the former colony's atolls, half a planet away from Paris.

Macron stopped short of apologizing Tuesday, but acknowledged France's “debt” to Polynesians over the underground and atmospheric tests, which ran from 1966-1996. Polynesian demonstrators welcomed his words, but said they're waiting to see if he follows up with actions.

Macron promised money for cyclone shelters to help the island territory cope with climate change, and more help in fighting the COVID-19 pandemic in a region where most islands have no airport, and reaching emergency medical services can take hours or even days.

His hosts showered him with garlands upon arrival in Tahiti, and on the Marquesas Islands, singers in traditional straw skirts intoned the “Marseillaise” while Macron, in his standard suit and tie, stood at attention. Before he left, he was given a ceremonial Polynesian bowl called an umete and the region’s president said the bowl would carry Macron's promises home with him.

Macron said Polynesians “touched him to the heart,” and that France’s communities in the South Pacific and Indian Ocean have an essential role to play in its geopolitical strategy.

“We have a new page to write together,” he said of French Polynesia, which has enjoyed a special autonomous status since 2004, but is still overseen by Paris.

Macron described France's “incredible luck” to have lands in the Pacific, “where everything is being written today.”

China’s ambitions for the region were central to this trip. He spoke of “confrontation between great world powers” in the region and said France is counting on partnerships established in recent years with Australia, New Zealand, India and Japan.

“Woe to the little ones who will suffer the incursions of hegemonic powers,” Macron said. He warned Polynesians to “beware” of “exotic ... adventurous” infrastructure projects promising jobs that may never materialize.

China is the biggest trading partner for its Asian-Pacific neighbors, who are eager to profit from its appetite for industrial components and iron ore, timber, oil and food. But they are uneasy about Beijing’s use of access to its markets to push for political concessions. France, the United States, Japan and other governments worry that China is seeking to gain influence in their strategic spheres.

Macron pledged that France would “protect” the region’s fishing communities, communication networks and other infrastructure, notably through more investment.

After 600 million euros ($708 million) in extra spending to help businesses and health care facilities amid the pandemic, Macron promised an additional 300