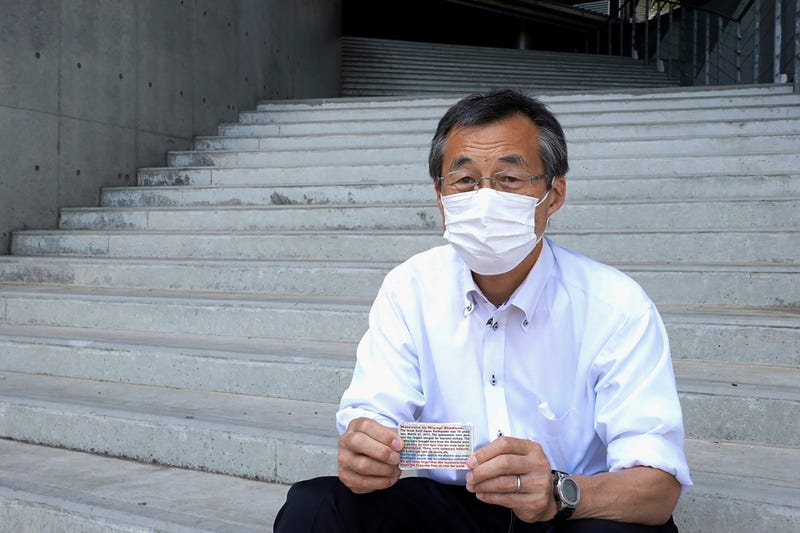 RIFU, Japan (AP) — Atsushi Muramatsu's handmade flyers are the size of a business card, written in several languages. “Welcome to Miyagi Stadium," one reads. "The gymnasium next door was the largest morgue for tsunami victims.”

Over a decade after the massive earthquake and tsunami devastated northeastern Japan, the Tokyo Games were supposed to offer a chance to showcase how much has been rebuilt. They were even billed as the “Recovery and Reconstruction Games," and the Olympic torch relay started from Fukushima prefecture, the heart of the nuclear disaster area.

But the coronavirus pandemic means few spectators are coming to any of the Olympic events, including soccer and baseball, being held here. That leaves some Olympic volunteers having to find their own ways to recount their experiences to those rare fans who pass through, as well as members of the media.

“I believe that residents in disaster-hit areas want to express gratitude for support from overseas, and I also want to keep delivering a message that we want to be remembered,” said Muramatsu, who is serving as a volunteer at the Miyagi Stadium media operation center.

Another volunteer, Mieko Onuma, wants to return the favor to all those who supported the reconstruction by sharing her experience with Japanese visitors to Miyagi at a storytelling center set up near a shuttle bus station.

“When the disaster happened, I was working as a teacher at an elementary school. I feel a sense of duty to tell what happened that day, so I tell my stories here,” said Onuma.

“Back then I was 5 years old, so I barely remember the disaster. So it wasn’t like recalling back my memories but rather learning new things,” said Umeki. “There were so many shocking things I didn’t know.”

On March 11, 2011, the magnitude 9.0 quake sent a tsunami that triggered meltdowns at the Fukushima nuclear power plant. The disaster heavily damaged coastal neighborhoods and took more than 18,000 lives in all, with around 10,000 people killed in Miyagi prefecture.

Muramatsu said he observed hundreds of dead bodies being cleaned after their recovery from the ocean, then carried to the gymnasium.

Being exposed to such scenes every day and hearing about the deaths of his friends, Muramatsu said he felt there was no line between life and death. What motivated him to stay alive was the daily conversations with foreign rescuer workers, who helped lift people's spirits with a joke or a kind word.

“I want to pass on the message to the next generation that we have received so much support from overseas, and we shall never forget that support,” Muramatsu said.