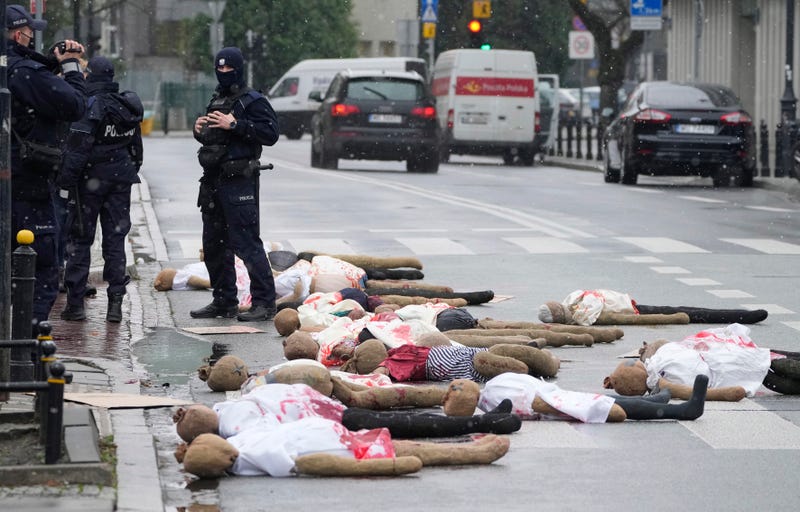 WARSAW, Poland (AP) — Women’s rights activists in Poland used red paint to symbolize blood as they protested Tuesday against a government plan to register every pregnancy in a national database and as parliament prepares to debate a new proposal to further restrict abortion.

The activists fear the database will allow Poland's right-wing authorities to track whether pregnancies end in a birth and a create a possible tool for prosecutions. The health minister denied that recently, saying there is “no pregnancy register,” and the government was just making a routine shift from paper to digital files.

Poland last year restricted its already conservative abortion law and abortions are now only allowed in cases of rape or incest, of if the woman’s life or health is in danger.

In practice, Polish women travel abroad for abortions in other European countries, including the Netherlands and Slovakia, and there are groups who assist them.

“This is a full blown war on women in Poland,” said Marta Lempart, a leader of Women’s Strike, a women’s rights movement leading the protests, which took place in Warsaw and elsewhere in front of government buildings in recent days.

Parliament is scheduled Wednesday to debate a proposal for a complete ban on abortion in Poland, including in cases of rape and danger to a woman’s health. The “stop abortion” bill would define a fetus as a child under the law, and were it to become law, the activists who help women travel to abortion facilities and the women themselves could faces years of imprisonment for murder. The penalty could be from five years to a life sentence.

Irene Donadio of the International Planned Parenthood Federation European Network said the bill would also leave women who have miscarriages subject to possible criminal charges and prison terms of up to five years. She called it a “nightmare scenario for women in Poland.”

She said in countries that treat abortion as murder, such as El Salvador, women who are hospitalized with miscarriages sometimes fall under suspicion of having had an abortion, such as with an abortion pill, and can be charged by prosecutors.

“If Poland takes such a cruel decision it would simply devastate women and families’ lives,” Donadio said.

Amnesty International on Tuesday urged Polish lawmakers to reject what it called a “sinister bill” and “the latest in a wave of cruel and discriminatory attacks on women’s human rights.”

The proposal is not the work of lawmakers but was brought by an anti-abortion foundation. In Poland, citizen’s groups can bring legislative proposals to parliament if they collect at least 100,000 signatures.

A separate legislative proposal in parliament this week would create a “Family and Demographic Institute" aimed at increasing Poland's birthrate by limiting the number of divorces. The bill calls for head of the institute to have prosecutorial powers in divorce proceedings, with the power to demand that divorces not be granted. The agency's head would also have access to data on pregnancies.

It is not yet clear if either of the legislative proposals have a chance of being passed.