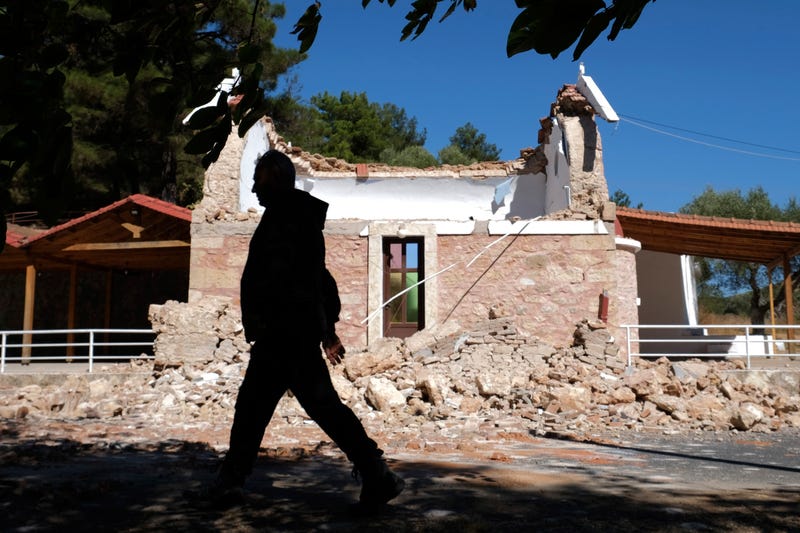 ATHENS, Greece (AP) — A strong, prolonged earthquake with a preliminary magnitude of at least 5.8 struck the Greek island of Crete on Monday, killing one person and injuring 20, while damaging homes and churches and causing rock slides near the country's fourth-largest city.

The quake sent people fleeing into the streets in the city of Heraklion, and schools were evacuated. Repeated aftershocks — described by witnesses as feeling like small explosions — rattled the area, adding to damage in villages near the epicenter.

The Athens Geodynamic Institute, which gave the 5.8 magnitude, said the quake struck at 9:17 a.m. (0617 GMT), with an epicenter 246 kilometers (153 miles) south southeast of the Greek capital, Athens.

Hospital officials said 20 people had been treated for injuries, ten of them receiving first aid.

International and domestic flights to Heraklion airport weren’t affected by the quake, while the region’s hoteliers association said there was no serious damage to any hotels in the area, which includes many popular holiday resorts.

Municipal construction vehicles helped clear a path for the emergency services, scooping up rubble and knocking down a badly damaged apartment block balcony.

“This is not an event that occurred without warning. We have seen activity in this region for several months. This was a strong earthquake, it was not under sea but under land and affecting populated areas,” seismologist Gerasimos Papadopoulos said on Greece’s state broadcaster ERT.

The European-Mediterranean Seismological Center and the U.S. Geological Survey put the preliminary magnitude of 6.0, with an epicenter seven kilometers (four miles) north of the village of Thrapsano. It is common for different seismological institutes to give varying magnitudes for an earthquake.

Greece's Climate Crisis and Civil Protection Ministry said one man had been killed. He was pulled from the rubble of a partially collapsed church in the village of Arkalochori, very close to the epicenter, authorities said. Local media said the victim was a 65-year-old builder who had been working inside the church when the roof collapsed on him.

Government spokesman Giannis Oikonomou said there were no reports of people missing or trapped under rubble.

Seismologist Efthimios Lekkas, who he