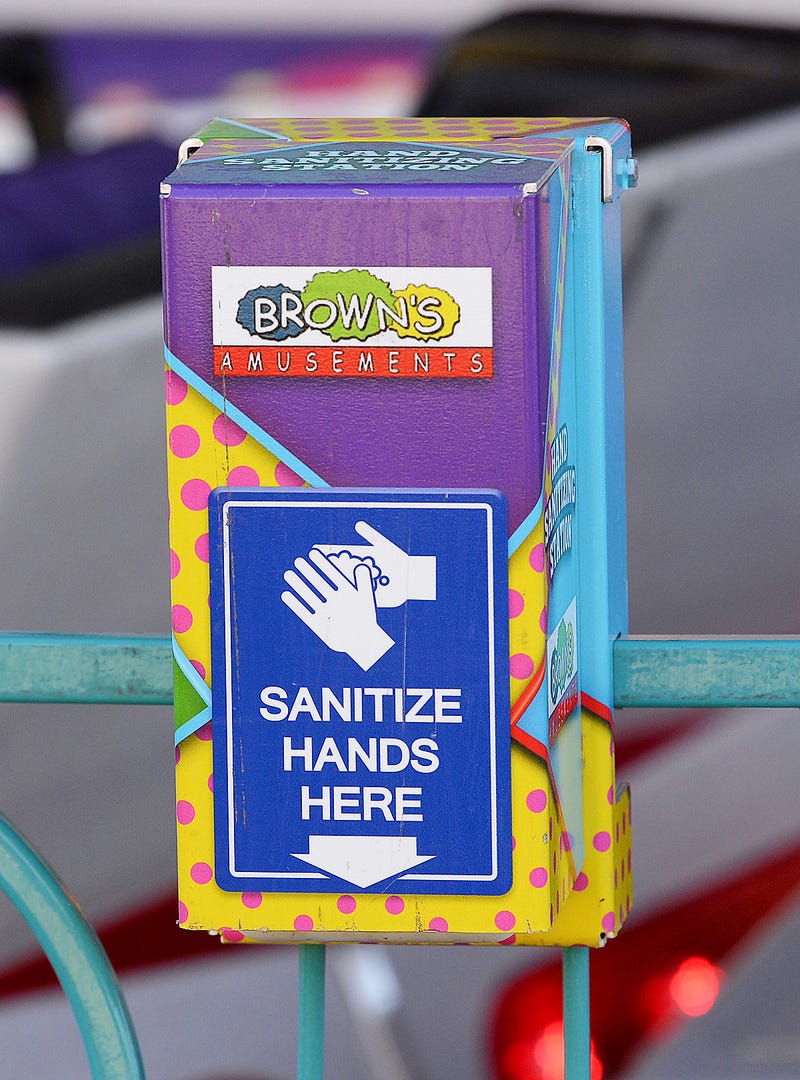 MAINE — Opponents of a COVID-19 vaccine mandate for health care workers in Maine filed an emergency appeal to the U.S. Supreme Court after being dealt another legal defeat on Friday.

The appeal was filed hours after the U.S. 1st Circuit Court of Appeals in Boston denied a request to stop the mandate from going into effect. The Supreme Court previously rejected appeals of vaccine requirements for New York City teachers and Indiana University staff and students.

The vaccine mandate in Maine, announced by Democratic Gov. Janet Mills, requires health care workers to get vaccinated against the coronavirus or risk losing their jobs. The state begins enforcing the mandate on Oct. 29.

MORE ON THE PANDEMIC:

— Made in India virus kits boost testing, and local industry

— FDA unlikely to rule on Merck’s COVID pill before December

— See all of AP’s pandemic coverage at https://apnews.com/hub/coronavirus-pandemic

SACRAMENTO, Calif. -- A Northern California judge has tentatively ruled that state prison officials acted with deliberate indifference when they caused a deadly coronavirus outbreak at one of the world’s most famous prisons last year.

But Marin County Superior Court Judge Geoffrey Howard said vaccines have changed the landscape so much since then that officials are no longer violating inmates’ constitutional rights.

The lawsuit stemmed from the botched transfer of infected inmates in May 2020 from a Southern California prison to San Quentin. The coronavirus then quickly sickened 75% of inmates at the prison north of San Francisco, leading to the deaths of 28 inmates and a correctional officer.

PHOENIX — Arizona’s three state universities will comply with federal mandates for government contractors and require their employees to be fully vaccinated for COVID-19 by Dec. 8 unless granted exemptions, officials announced Friday.

The requirement by the University of Arizona, Arizona State University and Northern Arizona University includes undergraduate and graduate students who are also university employees, the state Board of Regents said in a statement.

The statement cited President Joe Biden’s executive order regarding on compliance with federal COVID-19 workplace guidance and said the universities have “hundreds of millions of dollars in federal contracts, funding critical research, employment and educational efforts.”

“We respect individual opinions regarding the vaccine and will include disability (including medical) and religious accommodations consistent with federal rules,” the statement added.

A regents spokeswoman did not immediately respond when asked what would happen to an employee not complying with the mandate.

The University of Arizona “already has received amended federal contracts that include this requirement,” President Robert Robbins said in statement. “While we respect individual opinions regarding the vaccine, we will continue with these mission-critical endeavors and will be complying with this new requirement.”

“However, the surge is not over,” the weekly bulletin warned. “Rural hospitalizations remain near their peak and Nevada is still averaging five times more cases than in June.”

Officials added that while hospital capacity in rural communities continues to be strained, “significant challenges are not as widespread as they were in July and August.” Statewide hospitalizations declined 11% between Sept. 23 and Oct. 7.

As of Thursday, the test positivity rate was 7.9% statewide across Nevada, where 55.1% of all residents 12 and older are fully vaccinated and 63.7% have initiated vaccination.

In rural areas outside Las Vegas, Reno-Sparks and Carson City, only 49.5% are fully vaccinated. The positivity rate there is 13.7%.

ANCHORAGE, Alaska — The governing body of Alaska’s largest city has overridden the mayor’s veto of an emergency order instituting a mask mandate for 60 days.

Alaska Public Media reports the Anchorage Assembly on Thursday overturned Mayor Dave Bronson’s veto of the measure requiring masks by most everyone in indoor public spaces.

The order could be canceled earlier than 60 days if two of Anchorage’s three hospitals are not operating with crisis care protocols or if the city does not have a high transmission rate of COVID-19.

PORTLAND, Maine — A federal appeals court has denied an emergency request to stop a COVID-19 vaccine mandate from going into effect in Maine.

The rule, announced by Democratic Gov. Janet Mills, requires health care workers to get vaccinated against the disease by Oct. 29 or risk losing jobs. Opponents of the mandate challenged it in federal court and a judge declined to block it earlier this week.

A three-judge panel of the United States Court of Appeals for the First Circuit in Boston issued a one-sentence statement on Friday that said the request for an emergency halt to the mandate was denied, the Bangor Daily News reported.

Health workers in the state needed to get their final shot by Friday to comply with the mandate in time.

OMAHA, Neb. — Nebraska’s attorney general said Friday that he won’t seek disciplinary action against doctors who prescribe controversial, off-label drugs to treat and prevent coronavirus infections as long as they get informed consent from patients and don’t engage in misconduct.

“Based on the evidence that currently exists, the mere fact of prescribing ivermectin or hydroxychloroquine for COVID-19 will not result in our office filing disciplinary actions,” the Republican attorney general said in the opinion.

Many health experts and leading medical groups have been trying to stop the use of both drugs, arguing that they can cause harmful side effects and there’s little evidence that they help.

ROBBINSDALE, Minn. -- Gov. Tim Walz said Friday he’ll use the Minnesota National Guard to help alleviate staffing shortages at hospitals and care facilities that are struggling to cope with the surge in COVID-19 cases among unvaccinated Minnesotans.

More than 400 Minnesota hospital patients are currently waiting for beds to open up at other care centers and taking up space needed for incoming patients, he said.

Walz said the number of National Guard soldiers who will be deployed to help out and their exact roles have yet to be determined.

Hospitals across Minnesota report that they’re at or near capacity, with intensive care and pediatric beds in short supply. They’re currently treating just over 1,000 COVID-19 patients. But hospital officials said the problem is not just due to the coronavirus, but also other serious conditions such as heart attacks, strokes, trauma and scheduled surgeries.

ALBUQUERQUE, N.M. — A New Mexico judge has denied a request by dozens of scientists and others at Los Alamos National Laboratory who sought to block a vaccine mandate.

Workers risk being fired if they don’t comply with the lab’s Friday afternoon deadline.

The case comes as New Mexico extends its mask mandate for indoor spaces.

While the vaccination rate among adults in New Mexico hovers around 71.5%, the rate among lab employees is much higher. Still, 114 workers sued, saying the mandate violates their constitutional rights and that lab management has created a hostile work environment.

Attorneys for the lab argued that being vaccinated is a condition of working there.

BERLIN — The pharmaceutical companies Pfizer and BioNTech say they have requested that their coronavirus vaccine be licensed for children aged 5 to 11 across the European Union. If authorized, it would be the first opportunity for younger children in Europe to be get immunized against COVID-19.

In a statement on Friday, Pfizer and BioNTech said they had submitted data to the European Medicines Agency, including late-stage results from a study testing their COVID-19 vaccine in more than 2,200 children aged six months to 11 years, using a lower dose than what’s normally given to adults.

The companies said those results showed a “strong immune response” in the children and that the vaccine was also found to be safe. There are currently no COVID-19 vaccines licensed for use in children younger than 12 in Europe or North America; the shots made by Pfizer-BioNTech and Moderna are authorized for children 12 and older in the European Union.

Earlier this month, Pfizer and BioNTech asked the U.S. Food and Drug Administration to green light their vaccine for kids aged 5 to 11.

ISLAMABAD--- The U.S. Embassy in Pakistan said on Friday that Washington is sending an additional 9.6 million doses of Pfizer COVID-19 vaccines to Islamabad in partnership with the COVAX global vaccine initiative.

According to an embassy statement, the latest donation brings the total number of COVID-19 vaccines donated by the U.S. government to the Pakistani people to more than 25 million.

It said “these Pfizer vaccines are part of the 500 million Pfizer doses the United States purchased this summer to deliver to 92 countries worldwide, including Pakistan.

The latest development comes amid a steady decline in the fourth wave of coronavirus in Pakistan which has reported 28,228 fatalities from coronavirus among 12,62,771 cases since last year.

COLUMBIA, S.C. — The operator of a sprawling federal nuclear reservation in South Carolina says the vast majority of its 5,500 workers are now vaccinated against COVID-19 after the company mandated the shots.

But nearly 80 Savannah River Site employees who have refused to get inoculated are suing Savannah River Nuclear Solutions over the requirement, arguing the stipulation flouts South Carolina law because it amounts to illegally practicing medicine.

In a complaint filed Thursday in South Carolina state court, the workers said they wanted a judge to stop the federal contractor from instituting the mandate, which requires employees to get vaccinated against the highly contagious virus by a fall deadline or face firing.

The workers skeptical of the vaccine’s efficacy and safety appear to represent a small fraction of those employed by Savannah River Nuclear Solutions, which has held a U.S. Department of Energy contract to manage and operate the old nuclear weapons complex south of Aiken since 2008.

WASHINGTON — The Biden administration is expected to announce Friday that it will lift travel restrictions on Nov. 8 for fully vaccinated individuals arriving in the U.S. by air travel or by crossing land borders, according to a White House official.

Foreign nationals will be able to travel to the U.S. if they show proof of vaccination and a negative COVID-19 test taken within three days of travel. The policy change was announced in September, but the White House is announcing Friday the date when it will take effect.

The White House announced earlier this week it would lift restrictions on fully vaccinated foreign nationals for non-essential travel at U.S. land borders and ferry crossings with Canada and Mexico in early November. Land and ferry travelers will be required to present proof of vaccination to officials upon request.

The official, who was granted anonymity to speak on a policy that had not yet been publicly announced, said that the Centers for Disease Control and Prevention has informed airlines that all FDA-approved and authorized vaccines, as well as those that have an Emergency Use Listing from the World Health Organization, are acceptable. The CDC plans to issue guidelines on acceptable proof of vaccination in the coming weeks.

PARIS — COVID-19 tests in France are no longer free for unvaccinated adults unless they are prescribed by a doctor.

While tests remain free for vaccinated adults and all children under 18, adults who have not gotten their shots will have to pay 22-45 euros ($25-$52) to get tested as of Friday.

The government introduced the change as a complement to the COVID-19 passes that have been required in France since the summer. To get a pass, people need to show proof of vaccination, a recent negative test or recent recovery from the virus.

The passes are required to visit tourist sites, for hospital visits and on domestic train trips and flights. The pass requirement, announced in July, helped boost France’s vaccination rate.

Over 49 million people, or about 74% of the population, are fully vaccinated against the coronavirus in France. Everyone age 12 and older are eligible for shots.