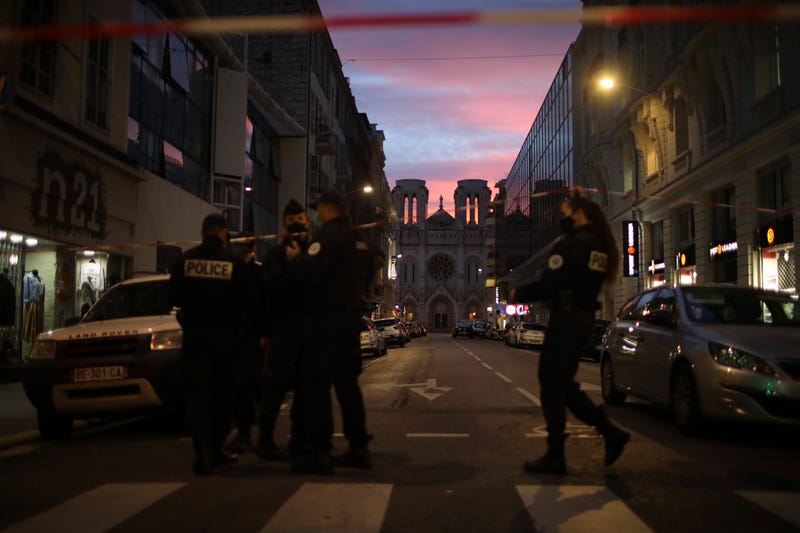 NICE, France (AP) — A young Tunisian man armed with a knife and carrying a copy of the Quran attacked worshippers in a French church and killed three Thursday, prompting the government to raise its security alert to the maximum level hours before a nationwide coronavirus lockdown.

The attack in Mediterranean city of Nice was the third in less than two months that French authorities have attributed to Muslim extremists, including the beheading of a teacher who had shown caricatures of the Prophet Muhammad in class after the images were re-published by a satirical newspaper targeted in a 2015 attack.

Thursday's attacker was seriously wounded by police and hospitalized in life-threatening condition after the killings at the Notre Dame Basilica. The imposing edifice is located half a mile (less than a kilometer) from the site where another attacker plowed a truck into a crowd on France's national day in 2016, killing dozens.

President Emmanuel Macron said he would immediately increase the number of soldiers deployed to protect schools and religious sites from around 3,000 to 7,000.

France’s anti-terrorism prosecutor said the suspect is a Tunisian born in 1999 who reached the Italian island of Lampedusa, a key landing point for migrants crossing in boats from North Africa, on Sept. 20 and traveled to Bari, a port city in southern Italy, on Oct. 9. Prosecutor Jean-Francois Ricard did not specify when he arrived in Nice.

In Tunisia, the anti-terrorism prosecutor's office said an investigation was being opened on the “suspected commission of a terrorist crime by a Tunisian ... outside national borders,,” the official TAP news agency quoted the prosecutor's office as saying.

The French prosecutor said the attacker was not on the radar of intelligence agencies as a potential threat.

Video cameras recorded the man entering the Nice train station at 6:47 a.m., where he changed his shoes and turned his coat inside out before heading for the church, some 400 meters (yards) away, just before 8:30 a.m.

Ricard said the attacker was carrying a copy of Islam’s holy book and two telephones. A knife with a 17-centimeter blade used in the attack was found near him along with a bag containing another two knives that were not used in the attack.

He had spent some 30 minutes inside the church before police arrived via a side entrance and “after advancing down a corridor they came face-to-face with (the attacker) whom they neutralized,” Ricard said.

Witnesses heard the man crying ”Allahu Akbar” as he advanced on police. Police initially used an electric gun then fired their service revolvers. Ricard said 14 bullet casings were found on the ground.

Ricard detailed a gruesome scene inside the church where two of the victims died. A 60-year-old woman suffered “a very deep throat slitting, like a decapitation,” he said, and a 55-year-old man also suffered deep, fatal throat cuts. The third victim, a 44-year-old woman, managed to flee the church alive but died at a nearby restaurant.

Laurent Martin de Fremont, of the police union Unité SGP Police said the man was a sacristan at the basilica.

.The three were killed “only because they were in the church at that moment,” Ricard told reporters. He said investigators are looking for potential complicity in the “complex” probe.

An investigation was opened for murder and attempted murder in connection with a terrorist enterprise, a common term for such crimes.

The attack in Nice came amid a fierce debate in France and beyond over the re-publication of the Muhammad caricatures by satirical newspaper Charlie Hebdo.

The French consulate in the Saudi city of Jiddah was also targeted Thursday, a man claiming allegiance to an anti-immigrant group was shot and killed by police in the southern French city of Avignon, and scattered confrontations were reported elsewhere, but it is unclear whether they were linked to the attack in Nice.

France's national police chief had ordered increased security at churches and mosques earlier this week, but no police appeared to be guarding the Nice church when it was attacked, and Associated Press reporters saw no visible security forces at multiple prominent religious sites in Paris. French churches have been ferociously attacked by extremists in recent years. Thursday's killings come ahead of the Roman Catholic All Saints' holiday.

It was the third attack since Charlie Hebdo republished the caricatures in September as the trial opened for the 2015 attacks at the paper's offices and a kosher supermarket. The gunmen in that attack claimed allegiance to the Islamic State group and al-Qaida, which both recently called anew for strikes against France.

A verdict is planned for Nov. 13, the fifth anniversary of another series of deadly Islamic State attacks in Paris.

The recent attacks come amid renewed outcry over depictions of Islam's most revered prophet — whose birthday was marked in several countries Thursday — and the French government's fierce defense of the right to publish and show them. Muslims have held protests in several countries and called for a boycott of French goods.

“With the attack against Samual Paty, it was freedom of speech that was targeted," Prime Minister Jean Castex told lawmakers Thursday, referring to the teacher who was beheaded after showing his class caricatures of the prophet during a civics lesson. "With this attack in Nice, it is freedom of religion.”

Macron left for Nice almost immediately and, standing before the basilica, said, “Very clearly, it is France which is under attack.” He added that all of France offered its support to Catholics "so that their religion can be exercised freely in our country. So that every religion can be practiced. ”

In Avignon on Thursday morning, a man with a firearm was shot and killed by police after he refused to drop his weapon and a warning shot failed to stop him, a police official said. And a Saudi state-run news agency said a man stabbed a guard at the French consulate in Jiddah, wounding the guard before he was arrested.

While many groups and nations have been angered or frustrated by France's position on the cartoons, several issued their condolences Thursday, as did France's traditional allies.

The French Council of the Muslim Faith called on French Muslims to refrain from festivities marking the birth of Muhammad “as a sign of mourning and in solidarity with the families of victims and the Catholics of France.”

Turkey’s Foreign Ministry also strongly condemned the attack. "We stand in solidarity with the people of France against terror and violence,” the statement said.