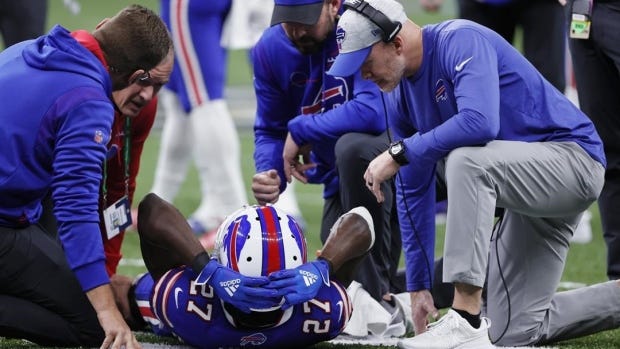 An injured Buffalo Bills cornerback Tre'Davious White (27) is helped by head coach Sean McDermott, right, and medical staff in the first half of an NFL football game against the New Orleans Saints in New Orleans, Thursday, Nov. 25, 2021. (AP Photo/Butch Dill)
By John Wawrow, The Associated Press and WBEN.com Newsroom

ORCHARD PARK, N.Y. (WBEN/AP) — Difficult as it will be to replace the loss of Tre’Davious White in the Bills secondary, Buffalo is getting healthier up front on both lines just in time for a key AFC East showdown against the New England Patriots.

Lotulelei, who missed four games, and Brown, who missed two, were cleared from the reserve/COVID-19 list. Feliciano practiced for the first time after missing four games with a calf injury, putting him in position to be activated off injured reserve by Monday night, when the Bills (7-4) host the Patriots (8-4).

That’s a promising development for a team which has split its past six games and ceded its division lead to New England. And it comes at a time when Buffalo is attempting to shake off the sudden shock of losing its top defender in White, who will miss the remainder of the season after tearing a ligament in his left knee in a 31-6 win over New Orleans on Thursday.

“There’s big shoes to fill,” coordinator Leslie Frazier said, referring to second-year cornerback Dane Jackson assuming White’s starting role. “He’s the next man up and he’ll do a good job for us. But to say that he will play at the level of Tre’Davious, that would be, you know, misleading for sure.”

White is the key fixture in a secondary which ranks second in the NFL — behind New England — with 16 interceptions and traditionally covers an opponent’s top receiving threat. The fifth-year player, and 2019 All-Pro, was placed on injured reserve on Tuesday.

White is also the defense's emotional leader with Frazier calling the past few days as being difficult for the entire team. 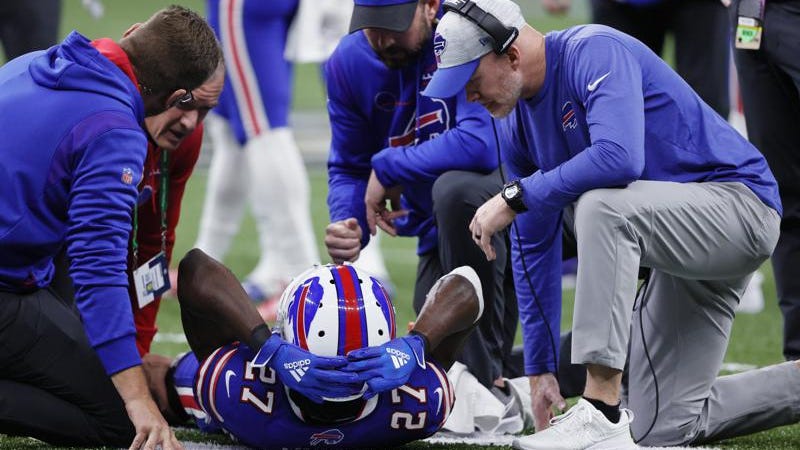 Lotulelei’s potential return will at the very least provide bulk to Buffalo’s run defense, which was trampled by Jonathan Taylor in a 41-15 loss to Indianapolis two weeks ago. Taylor scored five times, including four rushing, and the Colts generated 264 yards rushing.

“We struggled in that Indy game for sure in his absence, but that’s not the only reason we struggled,” Frazier said, referring to Lotulelei, the team’s top run-stuffer.

“But it would be great to have him back because of his toughness, his fierceness inside,” he added. “Just his stoutness in the run game is something that we missed.”

The Patriots rank 12th in the NFL in yards rushing, but have averaged 144 yards rushing in winning each of their past six.

Buffalo’s offensive line also has the potential of gaining a boost with Feliciano and Brown back in the starting mix.

Feliciano can play both guard positions, and would replace Cody Ford, who has struggled in both pass-protection and run-blocking in six starts this season. Brown, a rookie, showed promise in taking over the starting job at right tackle in Week 4.

Their absences have played a factor in accounting for Buffalo’s inconsistencies — especially on offense — since getting off to a 4-1 start. The Bills have especially been sloppy over a four-game stretch in which Josh Allen has combined for eight touchdowns passing and eight turnovers (seven interceptions and a lost fumble).

“We’ve been inconsistent at times, and I think it really comes down to us shooting ourselves in the foot in some situations and circumstances, with penalties, turning the ball over, so on and so forth,” coach Sean McDermott said. “That’s where the growth mindset (comes in) and that’s our challenge this week, along with playing the first-place New England Patriots.”

NOTES: Rookie OL Tommy Doyle was placed on the reserve/COVID-19 list. ... Buffalo is off on Wednesday before resuming practice on Thursday.