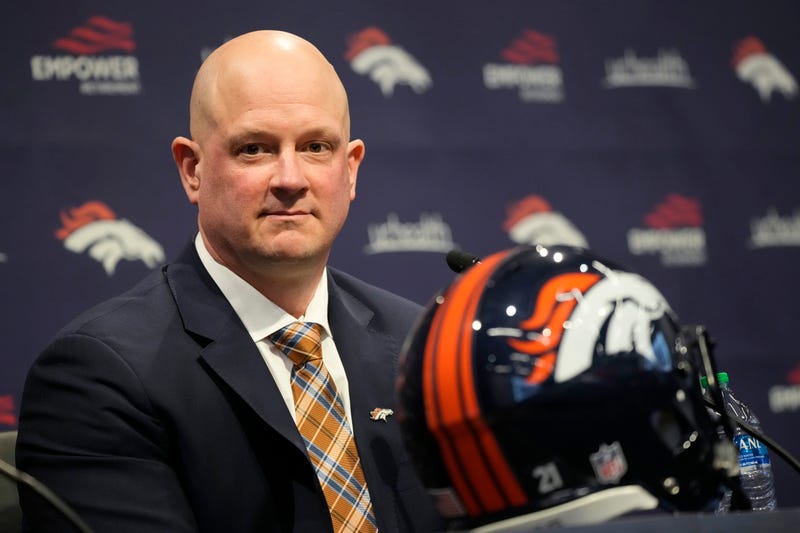 Through nearly 20 hours of interviews in Green Bay and Denver and on Zoom, Paton said it became clear Hackett “was the right leader for the Denver Broncos and really the perfect choice to reboot this organization.”

Enthusiasm and charisma are welcome changes for a franchise that has schlepped through three head coaches, 10 starting quarterbacks and no playoff appearances since Peyton Manning retired a month after winning Super Bowl 50 six years ago.

What Broncos fans can't wait to find out is whether Hackett also will bring Aaron Rodgers with him to Denver.

Ever since Hackett, 42, emerged as the choice to succeed Vic Fangio and his stodgy offense, Broncos fans have been fantasizing about the addition of Rodgers, who is contemplating his future after the Packers' early exit from the playoffs, to Denver for the final chapter of his stellar career much like Manning had from 2012-15.

Rodgers was first linked to the Broncos on draft night last year when reports emerged about him being peeved at the Packers for not involving him more in personnel decisions.

Rodgers eventually reported to camp after skipping the offseason, reworked his deal and had another MVP-worthy season in Green Bay, one that ended in disappointment like so many others.

The Broncos turned to journeyman Teddy Bridgewater, who went 7-7 before missing the final three weeks with his second concussion, and Drew Lock lost all of those games as the Broncos posted their fifth straight losing season.

Rodgers and Hackett got along famously during Hackett's three seasons as the Packers' offensive coordinator. At one point Rodgers said: “There’s nobody in the building that brings me more joy or is more fun to be around than Nathaniel Hackett.”

So, Paton was asked, did Rodgers have anything to do with Hackett's hiring following an epic eight-city, nine-day, 10-candidate search?

One thing is certain, however: Rodgers had plenty to do with Hackett getting the opportunity to join the head coaching fraternity in the NFL.

“Yeah, first and foremost, Aaron was absolutely unbelievable. He's been one of my biggest supporters and I love him,” Hackett said. “I'm thankful very much for him."

Working with Rodgers made him a better coach, said Hackett.

“Coaching a man like that, the one thing I learned is you'd better have an answer for every question because he's going to ask every single question about every single thing that you're going to do,” Hackett said.

“You're not going to be able to just put that up there and say, ‘Hey, you're doing this,'” Hackett said. “So, I think it's just allowed me to understand communicating and talking with everybody and knowing that you always have to have an answer why."

After watching Matt LaFleur call the offensive plays in Green Bay as a first-time head coach, Hackett said he'll do the same in Denver.

And, after assembling his coaching staff and reviewing the roster, Hackett will pitch in on Paton's search for a new quarterback, sifting through draft, trade and free agent possibilities.

The Broncos also are looking for a new owner in what's expected to be the most expensive team sale in U.S. sports history, drawing in the $4 billion-$5 billion range.

Hackett said the uncertain ownership situation didn't give him any pause about taking the job.

Hackett said he woke up his parents on the East Coast when he got the job Thursday morning. His father, Paul Hackett, used to coach in college and the pros, winning a national championship at Southern California in 1978 and a Super Bowl with the 49ers seven years later.

“It was pretty emotional,” Hackett said. “He's got the Super Bowl ring. He's got the national championship ring. And I'm lucky enough to a head coach now.”