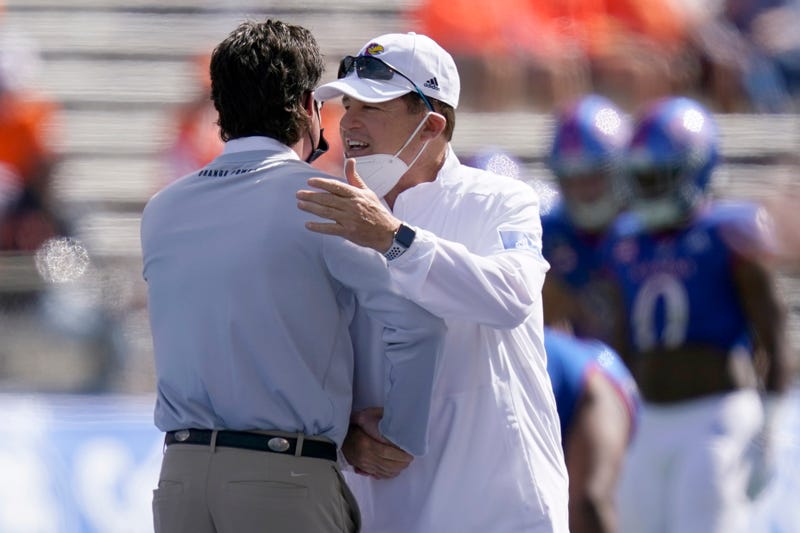 LAWRENCE, Kan. (AP) — Kansas coach Les Miles has been cleared to return to the Jayhawks after his positive test for COVID-19, but out of caution is skipping the team's trip to West Virginia for Saturday's game.

The 66-year-old Miles announced last week that routine testing had returned a positive test. He experienced only mild symptoms while he was quarantining, and he was able to work remotely with the Jayhawks during their bye week.

Miles said he made the “difficult decision" after conferring with the school's medical team, coaching staff and administration.

“While my 10-day window was completed this morning, there is too much still unknown about this virus for me to feel 100% confident that I won't transmit it to someone who comes into close contact with me," he said.

Also on Friday, Southern Mississippi at UTEP became the sixth game scheduled for Saturday to be postponed this week.

Southern Miss announced an increase in positive COVID-19 test results in the program forced the postponement the schools and Conference USA would work to reschedule.

Earlier in the week C-USA announced it was pushing back the date of its conference championship game to Dec. 18. There have been 32 games involving FBS teams canceled or postponed since Aug. 26.

The Southeastern Conference postponed next week’s game between Missouri and No. 10 Florida on Friday, the third league contest moved this week. The Gators had at least 21 players and coaches test positive for the coronavirus and dozens more quarantined because of contract tracing. That left them with fewer than the conference-mandated 53 scholarship players available Saturday against defending national champion LSU.

Because of the SEC’s safety protocols, Florida likely would not have gotten everyone back in time to practice and prepare for Mizzou. So the Gators will get consecutive weeks off before hosting Missouri on Oct. 31. Missouri had been scheduled to host Kentucky that day, but they will now play next Saturday, Oct. 24. Kentucky was scheduled to play at Georgia that day, but it moves to Halloween.

Florida and LSU are tentatively scheduled to play Dec. 12. Missouri and Vanderbilt are slated for the same day after their game this week got postponed because of an outbreak within Vandy’s program.

As for Kansas, Jayhawks athletic director Jeff Long said the school went through contract tracing protocols to notify anybody who had been in contact with Miles, including coaches and players from Oklahoma State, who had beaten Kansas the previous week.

“Coach Miles is doing well and has been cleared to leave isolation," Kansas team physician Dr. Larry Magee said in a statement. “However because of the short time interval between the end of his isolation and the departure of our football team, and out of concern for safety of his staff and players, he is not traveling to West Virginia.”

Tight ends coach Joshua Eargle will handle head-coaching duties against the Mountaineers, freeing offensive coordinator Brent Dearmon and defensive coordinator D.J. Eliot to focus on their sides of the ball. Eargle spent three seasons as the head coach at East Texas Baptist from 2013-15.

The Jayhawks, who fell to 0-3 with their 47-7 loss to the Cowboys, have had several clusters of positive tests within their program since summer workouts resumed. One of them occurred just before a season-opening loss to Coastal Carolina.

Miles has been diligent about wearing masks during games, though photos show him slipping it below his mouth when he greeted Baylor coach Dave Aranda and Oklahoma State counterpart Mike Gundy following each of their games.

“As we continue to work our way through this pandemic, nothing is more important than the health and safety of our players, coaches and staff that make up this great team," Miles said. “It is up to me to set the right example for our student-athletes, and that is what I am doing with this decision by not traveling with the team.”