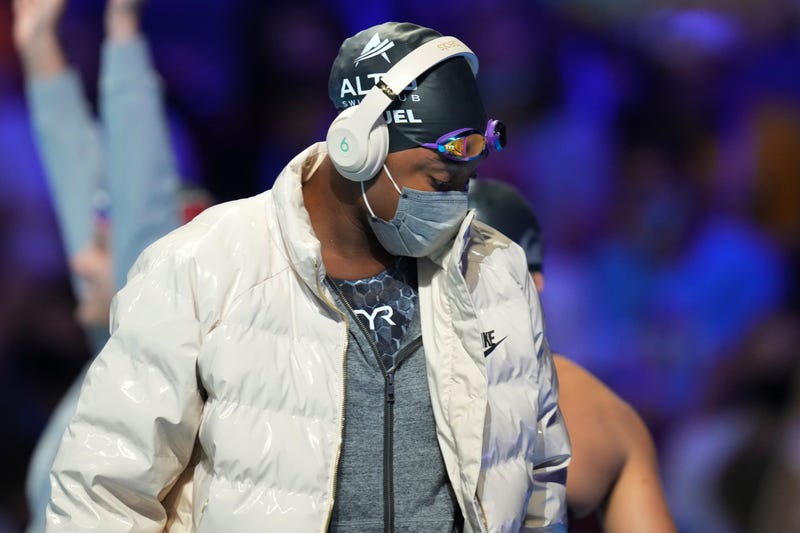 OMAHA, Neb. (AP) — Tears welled in Simone Manuel's eyes. Her voice broke as she revealed the heartbreaking reason behind her failure to advance in the 100-meter freestyle at the U.S. Olympic trials.

The first Black woman ever to win an individual swimming gold medal at the Olympics was diagnosed with overtraining syndrome — or burnout — in late March. She'd never heard of it before. Her mother looked up the condition online. At first, Manuel modified her training at Stanford for two weeks.

“I wasn’t seeing any progress with my performance in the pool,” she said Thursday night. “It actually was declining.”

Manuel first noticed in January that she seemed off. But it wasn't until two months later that “my body completely crashed.” Her symptoms included increased heart rate while at rest and in training, insomnia, depression, anxiety, and muscle soreness.

“Just walking up the stairs to the pool, I was gassed,” the 24-year-old sprinter said.

Workouts that once were easy became harder. She'd snap at her mother's questions over the phone from Texas and eventually isolated herself from her family. She had trouble eating. She talked to sports psychologists.

Finally, Manuel was forced to stop training and stay out of the pool for three weeks as a way to let her body rest.

But the break came at the worst possible time. She didn't resume training until April 17. Hardly enough time to ramp back up and try to qualify for the postponed Tokyo Games.

“I had moments where I didn’t even want to go to the pool because I knew it was going to be bad,” she said. “It was an uphill climb once I got back into the water. That was hard because I love this sport."

Manuel, who tied for the gold in Rio five years ago, finished fourth in the first 100 free semifinal at 54.17 seconds. She just missed a spot in Friday night’s final when five swimmers went faster in the second semifinal, with Erika Brown taking the eighth spot in 54.15 — two-hundredths faster than Manuel.

“I am proud of myself,” she said. “I did everything I possibly could have done to set myself up to be my very best at this meet. That 54 was as best as I could be. That’s a tough pill to swallow.”

Manuel has one more chance to make the team in the 50 free preliminaries starting Saturday.

“Things still feel hard,” she said. “The first 50, my speed doesn't seem to be there with the effort that I’m trying.”

She gave no hint anything was wrong when talking to the media two days before trials. Neither did her coach, Greg Meehan, who will guide the U.S. women in Tokyo.

The coronavirus pandemic that delayed the Olympics by a year and the murder of George Floyd by Minneapolis police in May 2020 also weighed heavily on Manuel.

“You're motivated to still go for it because it's your dream, but you're trudging along at times,” she said. “Being a Black person in America played a part in it. This last year for the Black community has been brutal."

Manuel said she's relying on her religious faith during this time of great doubt.

“That’s what’s giving me peace,” she said. “I know I did everything I possibly could to even be here and that makes me proud. I continue to stay strong during this process even when there were times when I wanted to give up.”

Manuel tried to sound upbeat, saying that depending on whether she makes the Olympic team, she would have to take a couple months off to let her body rest.