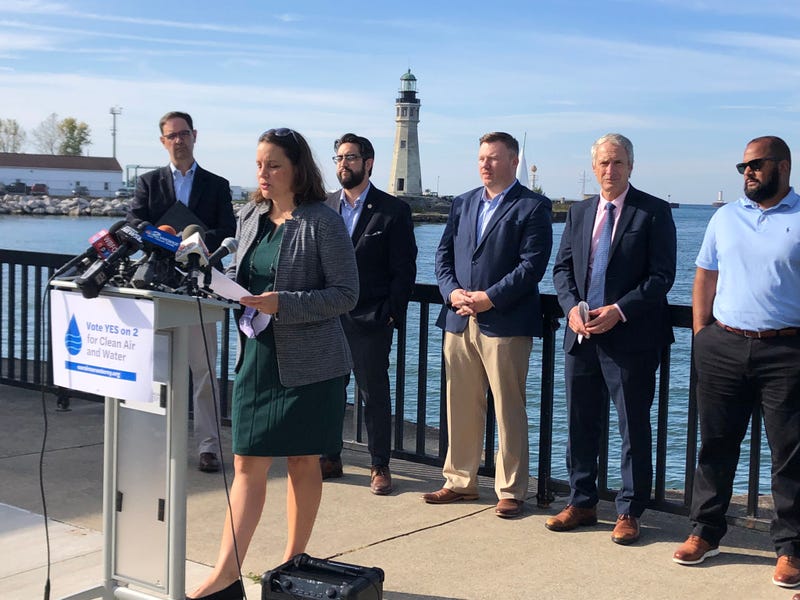 BUFFALO (WBEN) - Local officials and advocates gathered Thursday morning at the Erie Basin Marina to raise awareness for New York Proposal 2, which is the Environmental Rights Amendment that will be on the ballot Nov. 2 as a potential constitutional amendment.

"This November, when New Yorkers go to the polls, they will be faced with a simple question: 'are New Yorkers entitled to clean air, clean water, and a healthful environment?'" said State Senator Sean Ryan. "It's up to the citizens to decide how they want to answer that question, and if they answer in the affirmative, it will become a constitutional amendment."

But what would this change mean in a practical sense? What would be the mechanism for enforcement?

Peter Iwanowicz serves as executive director of Environmental Advocates NY, and he said the first thing this measure would do is give citizens legal standing in the fight for a cleaner environment.

"An oil company wanted to create the third largest crude oil hub in the United States in the City of Albany literally a chain link fence away from a public housing facility, and they came to us and said, 'Don't we have the right to breathe clean air that's not going to make us sick or kill us?'" said Iwanowicz. "Of course, as humans, the answer we'd give them is 'yes,' but when you look at our laws, the answer was 'no' - there is no legal right, at least not yet.

"All decision making is going to have to run through a screen," he continued. "If I say 'yes' to this, will it violate the public's right to clean air and clean water? We'll see those types of decisions at the state level, at the local level, and at the county level. All government in New York State is going to have to weigh their 'yes' and 'no's' based on a right to clean air and clean water, and whether the decision will violate that right."

"It all reinforces citizens' rights to sue," added Jill Jedlicka, execuitve director of the Buffalo Niagara Waterkeeper. "We have this ancient doctrine around all of our laws and regulations...and at the state level, this just gives individual residents the right to act and to hold those in power and those polluting accountable."