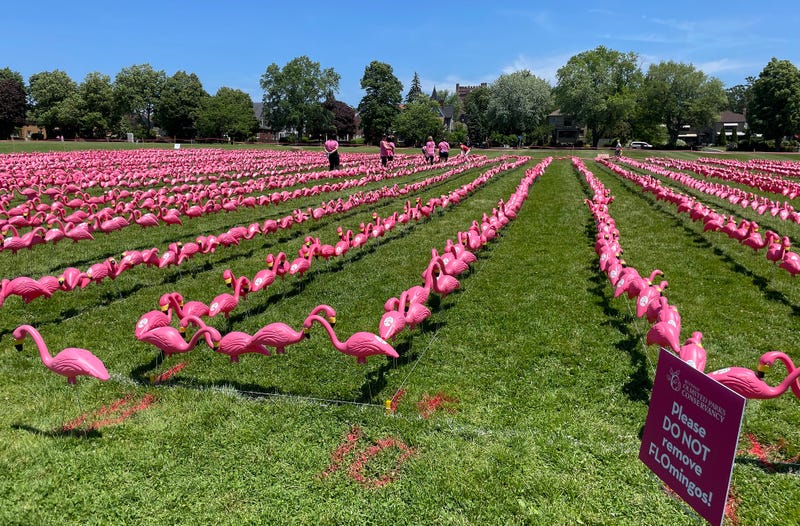 The Buffalo Olmsted Parks Conservancy (BOPC) lined up a total of 4,260 garden flamingos - aka "FLOmingos", as a nod to Frederick Law Olmsted - as they successfully took back the Guinness World Record for the "longest line of garden flamingos".

It's official: the @GWR comes back for Buffalo's 4,260 #FLOmingos! pic.twitter.com/Xepgv8PWX6

Tuesday's effort was to honor Olmsted's 200th birthday, while also bringing the community back out to take in the joys of the first day of summer.

"During the pandemic, everybody was home, we spent two years away from each other. Parks were really the opportunity for people to safely gather, and the Conservancy is really proud that we were able to keep these spaces up for the community," said Director of Development and Communications of the BOPC, Catie Stephenson. "This is an opportunity for us to bring the community together on the first day of summer, do something fun, do something connective - which Olmsted would have really loved - and honor the man that gave us the park system here."

Happening right now: @GWR is at Front Park in Buffalo counting the "longest line of garden flamingos" in honor of Frederick Law Olmsted's 200th birthday. @bfloparks is attempting to re-claim the record it originally set in 2018. pic.twitter.com/csLfINKBsW

The BOPC had originally held the Guinness World Record for the "longest line of garden flamingos" when they broke the record in 2018. However, that record was broken again in 2020 in a friendly competition with another organization.

"We took it from an organization in South Carolina, who took it back from us in 2020," Stephenson said. "So we're here bringing this record back to Buffalo. We have that competitive spirit here in the city, so we think we need this record."

The attempt to break the Guinness World Record is part of the national "Olmsted 200: Parks for All People" campaign, which is aimed to educate widely across diverse audiences about the enduring influence of Olmsted's values and designs for parks.

In addition to a world record being set on Tuesday, parkgoers have another opportunity to support the BOPC and their cause.

"We really just would like everybody to come together and to celebrate together. Olmsted was all about that connectivity, and we're hoping that this will create connections between the community," Stephenson said. "We're also hoping that people will adopt the flamingos. That is a fundraising benefit to the Conservancy to care for these parks. And then we're hoping that people will put them in their front yards at their homes and show their Olmsted pride."