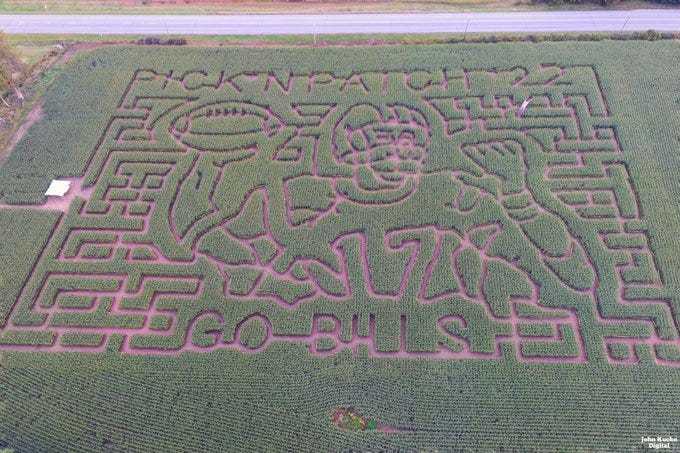 The Pick'n Patch and Corn Maze in Ontario County has gone all out this year for Buffalo Bills fans, as they constructed an intricate and absolutely a-maize-ing Bills quarterback corn maze.

The Pick'n Patch in Stanley, N.Y. has been doing corn mazes for 25 of the 30 years of operation, and decided to do something special for their 30th year in business.

"We have four grown children, and the three boys at the time wanted something to call their own. So we started doing corn mazes," said Melanie Wickham, co-owner of the Pick'n Patch. "They were very simple to begin with, but as we've grown over the years, so did the corn mazes. This year, I would say we really outdid ourselves."

From American Gothic to Charlie Brown's Great Pumpkin, the Josh Allen corn maze that the farm is doing this year is more challenging then there usual mazes of maize.

"We break it into two phases," Wickham explained. "We try to make the first phase pretty easy, so that anyone can do it and anyone can enjoy it. But we also have a very strong following of mazers who like to be challenged, so we make sure that the second part is very challenging. It's eight acres, it's two-to-three miles of walking, so it can take upwards of, if you do both parts, an hour."

To help ease in the difficulty, they have Allen- and Bills-related questions that you can answer to help you navigate the corn paths.

In addition, they are giving back by donating to the Patricia Allen Fund, that benefits the Oishei Children's hospital there in Buffalo.

"We're all about families here at our pumpkin patch, and that charity is one that is near-and-dear to Josh's heart," Wickham said.

How do you make a good corn maze? This may just reveal a farmer's secret.

"It is actually truly is a bit of a trade secret, but we double plant the corn so it's nice and thick, and then we work with a company to create the design," Wickham explained. "It is computer-generated, and then we just go through and hand-by-hand, remove the corn in the design. So although it's planted with farm equipment, the maize itself is put into the field by hand."

The maze is open everyday except Tuesday from 10 a.m. - 6 p.m. ET, and will be in operation until the end of October. Make sure you get there before 5 p.m. ET so you can have an adequate amount of time to complete the maze.

The maze is not the only fun attraction going on over at the Pick'n Patch. They also sell pumpkins, fall decorations and homemade doughnuts. People of all ages can enjoy the "Fields of Fun," where you can see a train, shoot an apple blaster, partake in the Tricycle Grand Prix, and try your hand at the low ropes courses.

"It's just a lot of fun," Wickham said. "It's something that our family has done for 30 years, and now we're seeing kids that were little here bringing their kids. So it's a really neat opportunity for families in the area."