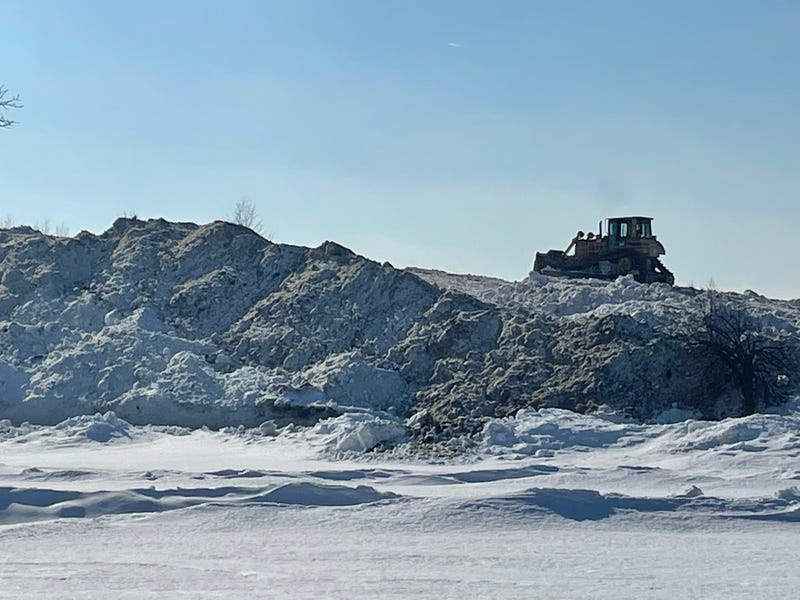 Orchard Park, N.Y. (WBEN) - US Senator Chuck Schumer predicts the mountain of snow that's growing in size on the SUNY ECC South Campus won't be fully melted before construction on a new Buffalo Bills stadium begins in the Spring of 2023.

Schumer visited the site Wednesday and pledged quick action in getting federal emergency money flowing into the hands of businesses and property owners quickly following the historic lake effect snow storm that dropped as much as 81 inches of snow on parts of the region.

“It’s time for the feds to dig-in," said Schumer as he announced a three-pronged effort to expedite getting money moving following the quick emergency declaration for the area following the storm.

"Get the money out fast," is the first priority, said Schumer, followed by raising the $5 million cap on funds and getting the Small Business Administration on the ground quickly to assist businesses in need of recovery.

The massive snow removal operation across the county continues and the ECC lot is the final destination for a continual train of dump trucks that drive into the lot, leave their loads of snow and see it pushed up a small mountain by giant bulldozers.

This is Mt Snow @SUNYECC South where truck after truck is filing in to dump the snow being removed from streets after Snowvember 2.0 dumped several feet of #LakeEffectSnow on the #Buffalo area. @WBEN pic.twitter.com/86uJq4Frwn

"We have upwards of 65 front end loaders, we have half a dozen graders and probably about 80 dump trucks working around the clock," said Gary Hill on Union Concrete, who is spearheading the snow removal operation.

"There are approximately 4 trucks every minute," said Erie County Executive Mark Poloncarz. "Each truck is capable of dumping approximately 20 cubic yards of snow."

Since the storm struck Friday, Poloncarz says approximately 156 thousand cubic yards of snow has been dumped at the ECC site.